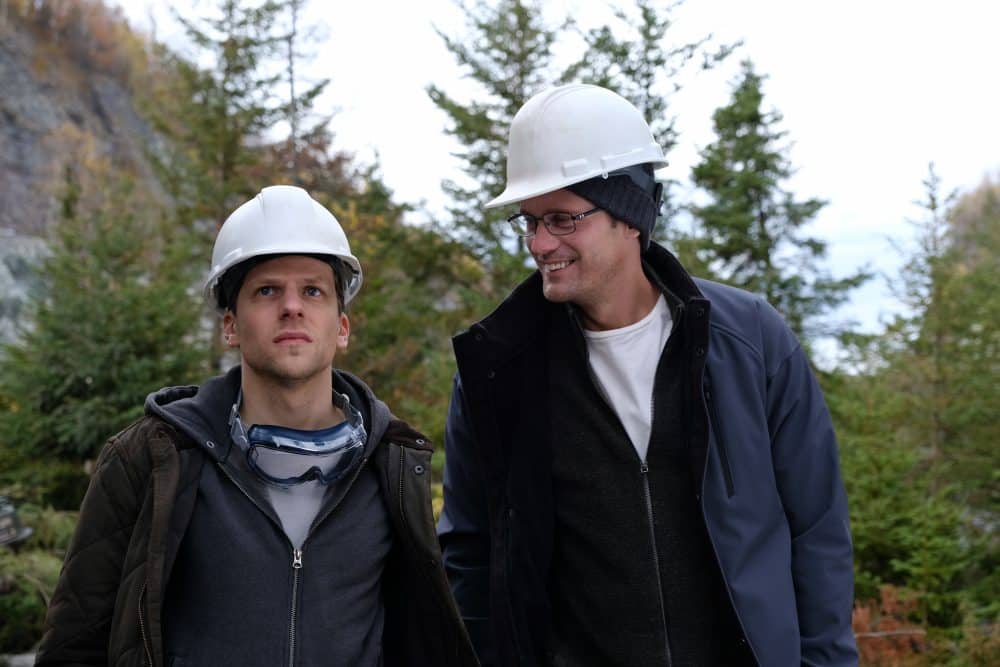 Kim Nguyen’s latest focuses on high-frequency but focuses too much on the how and not enough on the .

When you think about it, money is a bizarre concept, especially given the speculative nature of modern late-stage capitalism. Virtually the entire world has decided that numbers in a database are the driving force of our global economy. As global networks become more sophisticated, they contract the world, making communication between far-flung corners of the planet virtually instantaneous. A matter of milliseconds can now earn a company millions of dollars in profit on the stock exchange, with trades being made so quickly, the human mind can’t even process the passage of time between them.

The infrastructure and software that drive the finance world are at the heart of Kim Nguyen’s latest film The Hummingbird Project. The movie focuses on cousins Anton (Jesse Eisenberg) and Vincent Zaleski (Alexander Skarsgård), who work to build a fiber optics pipeline directly between a data warehouse in Kansas to the New York Stock Exchange. Their ultimate goal: to shorten trading transaction times to a blazingly fast 16 milliseconds, with Anton focusing on the software and Vincent coordinating the construction of the pipeline. Their former boss Eva Torres (Salma Hayek) serves as their chief antagonist, working to beat their transaction time in an act of retaliation for Anton leaving her company.

The subject matter is hardly something that one would consider for a major motion picture. The world that Nguyen paints is an extremely esoteric one, only relevant to economics wonks and the finance bros on Wall Street. At the heart of it all, Anton and Vincent’s final goal is merely to help rich people get even richer. All this money, manpower and brainpower isn’t being put to use for the greater good: its end goal is to increase income inequality. To this end, it’s hard to tell if Nguyen’s film is a critique of this system or a celebration of it.

In the final evaluation, it’s clear that The Hummingbird Project is critical of this version of capitalism, but the film spends so much time telling the story with a straight face, it’s hard to tell. The film starts with Vincent telling an investor the apocryphal tale of a vision he had while working a blue-collar plumbing job to pay for college. After being knocked unconscious onsite at a job, he sees a figure telling him to “follow to the end of the tunnel.” Vincent portrays this as a divine calling, that he has to follow the tunnel to the end. And the tunnel is the fiber optics line.

It isn’t until midway through the film that we actually discover the stakes of the project, where Anton explains the goal of cutting down transaction times to a waitress. In the example, he uses Zimbabwe lemon farmers, and the waitress asks what the farmers got from the deal. This is the first time Anton has apparently thought about the workers actually producing anything other than stock trading. This realization has little impact on him, however, other than a few scenes where he broods over it. He is still gung ho on shaving milliseconds off of the transaction time.


It’s hard to tell if Nguyen’s film is a critique of this system, or a celebration of it.

The only other challenge we see to the capitalist way of thinking is when Mennonites refuse to sell Vincent rights to dig their land, in one particularly on the nose exchange. Juxtaposing Vincent against a worldview that rejects all technology is not a viable alternative for most people, and as such, is toothless as criticism. The only alternative to rampant capitalism can’t just be being a Luddite.

The second way the film critiques capitalism subtly is in Hayek’s calculating Eva Torres. In interactions with her employees, she references how she cares for them. However, this is not unconditional; she only cares for them as long as she can extract value from their labor. When Anton leaves, she hires a private detective to track Vincent and Anton to figure out their plans, then confronts Anton and threatens him with legal action – not because he had done anything illegal, but because he had betrayed her. In this way, it demonstrates the way in which capitalists will use employees only for the value they can extract from them, but will then try to guilt employees by invoking the ideals of loyalty in future.

Finally, there is the tried and true motif of the capitalist working themselves to death. About halfway through, Vincent discovers that he has stomach cancer, and should start treatment immediately. He, of course, decides he is too busy and forgoes treatment because people “are depending on him.” This really doesn’t come to much of a breaking point until the main conflict between Vincent and Eva has been decided, and as such, really bears little impact to the story other than thematically.

The film itself is well made – there are gorgeous vistas of the American landscape juxtaposed with shots of New York. Since one of the main challenges for Vincent and crew is getting through the Appalachian Mountains (another great metaphor: using public land for private gains), we are treated to a beautiful landscape. Jesse Eisenberg’s performance is par for the course, and he plays the same character he seems to play in every movie: a smarmy, self-assured white tech guy. Skarsgård’s performance is also good, if not a little cliched, as an introverted, balding math genius. While he doesn’t get the screentime of Eisenberg, Skarsgård makes the most of it, including a humorous chase scene with the FBI around a hotel tennis court that provides a welcome moment of levity in a film largely devoid of it.

Unsurprisingly, though, the standout performer is Hayek, who oozes charisma and sex in every scene as she calculates each new chess move to beat her competition – the ultimate god-tier capitalist leveraging emotional labor and unscrupulous methods to get what she wants. The other standout role was Michael Mando’s Mark, Vincent’s right-hand man in the construction of the pipeline, one of the only grounded people in the film.

For a movie centered on trying to be the fastest, the film’s pacing tends to drag. It relies on plenty of shots of holes being dug, workers tracking the digging of said holes, and programmers programming. It feels like the film should be about 20 minutes shorter, and streamlined immensely. Despite an all-star cast, it feels muddled in its message. The ideas the film brings up are far more interesting than the plot itself. Even then, these ideas have to be teased out of the story, as they are more alluded to than directly referenced. In the end, you may find yourself angrier at the excesses and ridiculousness of late-stage capitalism than worried about whether these two greedy brothers will succeed in their mission.