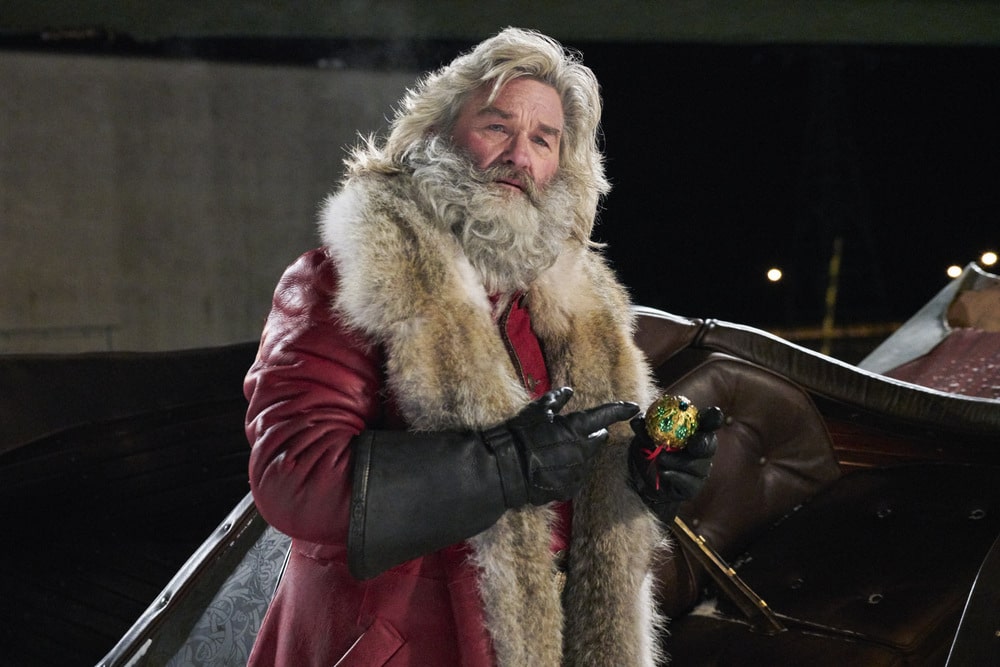 Netflix continues its encroachment into the Hallmark Christmas movie game with a treacly kid’s flick elevated greatly by Kurt Russell as a Santa Who Bangs.

The Hallmark Channel runs somewhere between 30 and 418 new Christmas movies every holiday season. I haven’t seen a single one of them. I don’t say that with any level of misplaced pride or anything, it’s just the way it worked out. I’m old and set in my ways when it comes to such things—for me, the tetralogy of Christmas movies is It’s a Wonderful Life, A Christmas Story, Scrooged, and the 1951 Alastair Sim adaptation of A Christmas Carol (alternately there’s the 1984 George C. Scott adaptation, if you prefer a Scrooge that looks like he’d kick a dog to death if he thought no one was looking). I just don’t have time in my extremely busy schedule of watching A Christmas Story six times in a row to squeeze in A Shoe Addict’s Christmas, or A Gingerbread Romance.

That being said, while the Netflix original The Christmas Chronicles didn’t make me a believer in the joys of new holiday movies, it did make me a believer in the idea that Kurt Russell is one of America’s greatest treasures. After starring in the pitch-black Bone Tomahawk and The Hateful Eight, it’s both jarring and delightful to see him go all in with playing a very modern update on Santa Claus, in an original story written by Matt Lieberman and directed by Clay Kaytis. Possibly wearing the very same gloriously bushy beard he wore in The Hateful Eight, he brings real joy and life to an otherwise formulaic “magic can happen if you just believe” family film.

10 year-old Kate (Darby Camp) is having a gloomy Christmas, with a dead father (Russell’s stepson Oliver Hudson in flashbacks), an overworked, depressed mother (Kimberly Williams-Paisley, Father of the Bride), and Teddy (Judah Lewis, The Babysitter), her sullen, troubled brother, who has no interest in spending the holiday with her. While watching old home movies of holidays past, Kate catches a glimpse of whom she believes to be Santa Claus, and she convinces a reluctant Teddy to help her catch him on film a second time.

Though it seems unlikely that they’d be the first to do so, the siblings manage to see Santa in action, and because they can’t just leave him alone to do his thing—a lot of the trouble in this movie would have been prevented if these kids had just minded their own damn business—they end up stuck in his sleigh and cause it to crash, separating Santa from his reindeer, his sack of gifts, and, most importantly, his magic hat. This Santa Claus is a cool Santa, though, wearing a red leather duster coat and refusing to “ho ho ho,” and he’s surprisingly chill about how much misfortune Kate and Teddy are causing for him. Or at least, he is until he gets arrested for car theft, and then it’s up to the kids to save Christmas while resolving their personal differences and learning to embrace the spirit of the holiday along the way.

Like most holiday movies, The Christmas Chronicles is perfectly harmless, utterly forgettable, and at least twenty minutes longer than it needs to be. It makes the mistake of putting two not terribly engaging child characters at the forefront when a far more entertaining film could have been made focusing on Santa’s adventures at the North Pole with the odd, Mogwai-like elves who do his bidding. Though kids will likely be thrilled at the scenes of Santa jumping from house to house to deliver toys, there are some curiously disturbing moments for a family movie, such as Santa being body slammed and put into handcuffs, a gang of murderous muggers who try to steal the sack of gifts, and elves that threaten to chainsaw a character in the crotch. It’s a strange tonal shift to a sappy ending that involves a magic Christmas tree ornament and a brief glimpse of a dearly departed relative.

But man, how great is Kurt Russell? Every moment he’s on screen is a treat wrapped in a big red bow, whether he’s complaining how Santa is depicted in art and advertising, or performing a jailhouse musical number backed up by the E Street Band’s Steve Van Zandt in an absurd wig. His best moment is right at the very end, when he has some alone time with a thin, glamorous Mrs. Claus, played in a cameo appearance by exactly who you’d expect it to be. He looks like he’s been waiting to play Santa Claus his whole life, spending years on the perfect eye twinkle, and even if the movie overall really isn’t worth the time and effort he put into the role, he makes it worth watching.

The Christmas Chronicles zaps down your chimney and onto your Netflix screens Thursday, November 22rd.