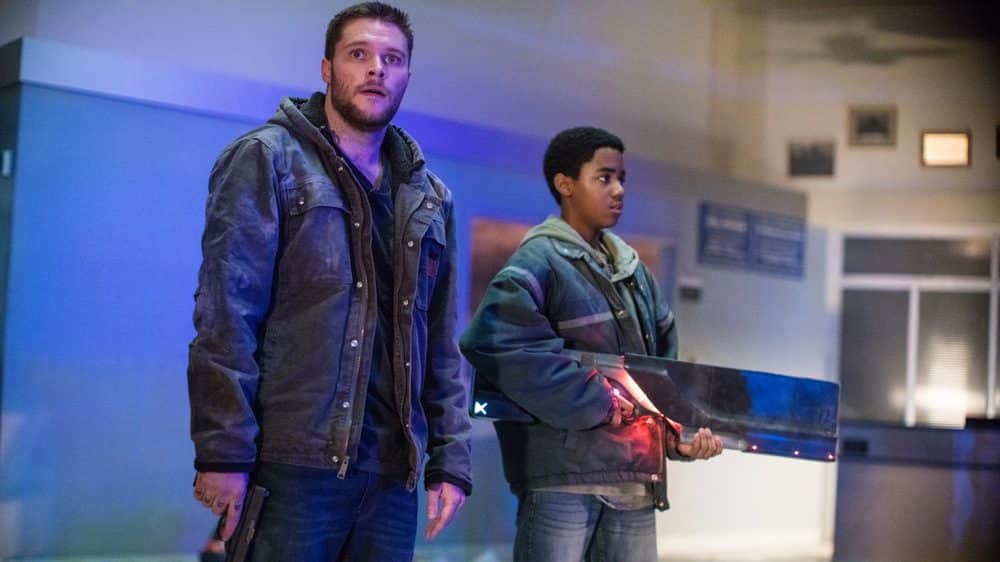 Jack Reynor keeps his brother and his big-ass gun safe in this tepid late-August shoot-em-up, its characters as mild as its ambitions.

Detroit has had a bit of a film renaissance in the 2010s, so much so that the city could be classified as its own sub-genre itself. Like It Follows or Don’t Breathe (or even Only Lovers Left Alive or, natch, Detroit), the Detroit Film is a movie that hinges on desperation. Whether it exists as an allegory for sexually transmitted infections or humans trying to regain a semblance of normalcy in their lives by any means necessary, these films portray the lengths at which people are willing to go, all while surrounded by the crumbling remnants of better days.

In its bones, Kin is very much this kind of movie. But a consistent lack of action and paper-thin characters do more than enough to derail this film of its potential.

Kin follows Eli Solinski (Myles Truitt, in his first full length film role), a fourteen-year-old who has just been suspended from school for getting in one too many fights. To fill his time, he finds scrap in the abandoned warehouses of Detroit and sells them for pocket cash. During his latest scrapping raid, Eli discovers multiple dead bodies in futuristic black armor and a mysterious laser gun, which he claims as his own. Shortly after, his older brother Jimmy (Jack Reynor) returns home from ten years in prison and moves in with Eli and their dad (Dennis Quaid). However, Jimmy owes $60k to local kingpin Taylor (James Franco). Taylor forces Jimmy to rob from his dad’s safe and results in Taylor killing their father. Jimmy quickly escapes town with Eli and holds off on telling him the truth about their dad for as long as possible, hoping to finally be able to bond as brother before he tells Eli everything.

Fitting with these kinds of late-August sci-fi fare, amongst all the laser guns and chasing, the female characters tend to get short shrift. The always amazing Carrie Coon is given a little less than ten dime-store lines and a character that feels more like a set up to an impending sequel than someone to care about now. The rest of the women are, well, either dead, portrayed as idiots, or only exist to be sexual eye-fodder. Which brings us to Milly (Zoe Kravitz): our single dimensional female protagonist. When we first meet Milly, she is a dancer at a very PG-13 strip club. When she escapes with the brothers, she shifts into mother mode for Eli. What she doesn’t get to do is fight for herself or get to take any kind of agency.  like an anti-Bechdel leaf, blowing wherever the men take her.

That said, Kravitz acts her face off with what little she is given. It really is such a shame she was given so little to work with, because with even just a little more character, Kravitz would have made Milly a memorable foil for Jimmy and Eli.

The only bit of acting that could be called into question would be Franco. While much of the blame could be placed on Daniel Casey’s script, the devolution of Taylor’s intimidation is very hard to ignore. When he is first introduced, Taylor’s actions are very simple and to the point. It feels as though any straying from his goal has two consequences: do as he says or die. Done right and that uncertainty can be pretty damn unnerving, which the first thirty minutes manages to sustain. Then…something happens. Somewhere in the midst from the drive from Detroit to Tahoe, Taylor and his crew stop at a gas station. Taylor asks to use the bathroom (pretty kind for a murderous sociopath) and when the attendant refuses to let him use the employee toilet, Taylor slips into a juvenile, C+ Anton Chigurh. Suddenly, this man of pure bloodlust has opened his options to do as he says, kill anyone who refuses, or a halfway-funny prank if they say no. Finally, any remaining fear of this character is put under when he goes full Murder Garfield and says “Mondays, right?” before shooting a cop, basically turning him into Alien from Spring Breakers without the playful pathos. It was genuinely amazing how Taylor went from honestly terrifying to some kind of gun-toting joke in only an hour and a half.

Then there’s the ending. For sake of spoilers there won’t be any detail on the twist ending (or the genuinely shocking cameo). Still, the ending acts like a magnifying glass for everything wrong with Kin. The movie suffers from a shocking lack of interest in the central mystery of where Eli’s laser gun comes from throughout its entire runtime. There are no hints as to what the ending may be. No clues as to where the mysterious laser gun may be from. No moments where people question who the mysterious humanoids in black armor may be. All the sci-fi aspects exist on a somewhat “just cause” basis until the last fifteen minutes of the movie, where a sequel-baiting dump of information is thrown at the audience promising nothing but  It really has a lot more in common with the structure of a character origins Marvel or DC movie. The thing though, is that we all know how Batman and Superman came to be. No one knows anything about Eli or anything about his future. But the knowledge pile at the end seems to act like we should. That we know that there’s a great adventure coming. It treats this movie more as a prequel to an established franchise than a standalone film.

It really is such a shame that so much ruined what could have been a powerful movie about family and desperation. Sibling filmmakers Jonathan and Josh Baker do a capable job as directors but do falter a couple of times in very big, tone crushing, ways. The score by post-punk band Mogwai is very calming and gorgeous. But, in the end, the movie feels like it’s already looking ahead to Kin 2, incapable of focusing on the present instead of aching to transport itself to the future.

Kin blasts its way into theaters on Friday, August 31st. 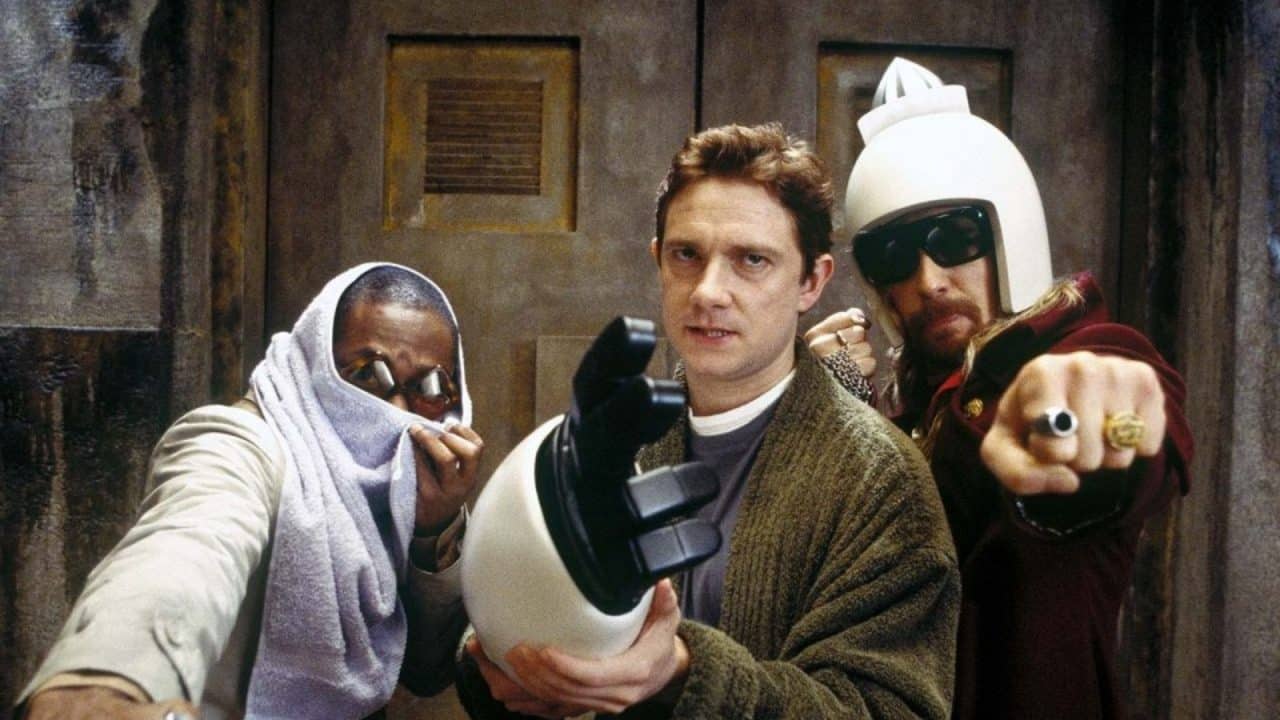 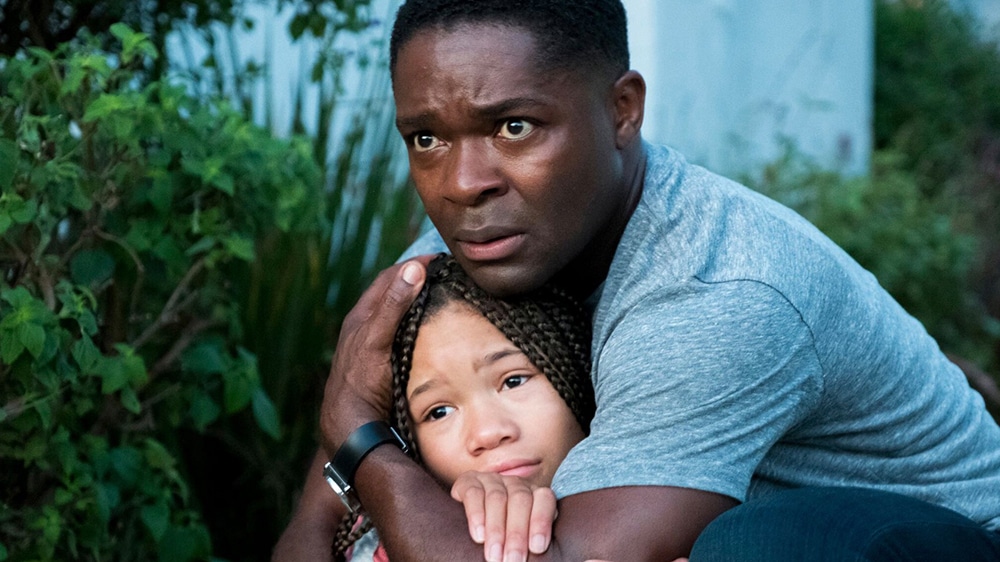 Jacob Estes’ time-travel caper feels like an uncredited remake, which makes its flaws stand out even more starkly.NOW STREAMING: Powered by JustWatch Of the 125+..