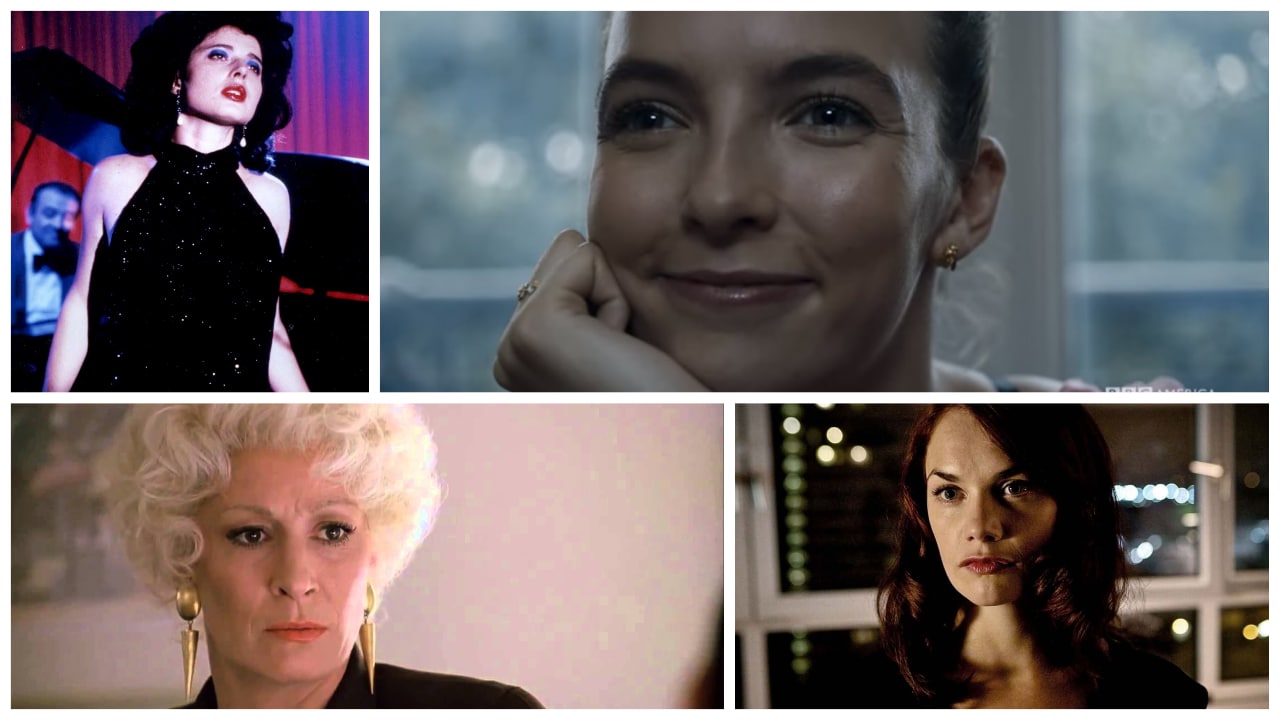 A look at some of our favorite movie & TV characters who used body & brains to get what they want — even if it killed someone.

Last year for Valentine’s Day we talked about our favorite horror-romance movies. Now we’re writing a love letter to some of pop culture’s greatest femme fatales, those one of a kind women who use their sharp wits and killer bodies to get what they want from dumb-with-lust (or just dumb) men. Sometimes they have a specific end game in mind, sometimes they just do it for fun. Whatever the case, they do it with style, purpose, and while fully in charge of their own sexuality, and those are all admirable qualities. It’s a shame that sometimes people end up dead because of it.

Because every Holmes needs a Moriarty, it felt right that Idris Elba’s detective John Luther would need a corresponding criminal mastermind. Played with a dangerously cool allure by Ruth Wilson, Alice is brilliant and beautiful as the stars she studies, and just as cold and empty. These two are perfectly matched in every way, attracting where they should repel. In one memorable scene, Alice describes a black hole to John in a way that Hannibal Lecter might describe the curve of someone’s thigh: “It consumes matter, sucks it in and crushes it beyond existence. When I first heard that I thought that’s evil at its most pure. Something that drags you in, crushes you, makes you…nothing.” His greatest enemy and closest confidant, Alice is the only person who truly understands John, and vice versa. The lines get so blurred between hunter and hunted they disappear altogether. The fact that John is still standing at the end proves the old adage that you should keep your friends close and your enemies closer.

Annalise Keating, How to Get Away With Murder

Maybe it’s better to be feared than loved, but Viola Davis’ Annalise Keating would prefer to be both. A high-powered criminal defense attorney and the toughest law professor at Middleton University, Annalise seems to have the perfect life for an ambitious woman. She’s highly skilled, professional, strong and confident. But when her student Will (Alfred Enoch) catches her in flagrante with detective Nate Lahey (Billy Brown) it’s obvious not all is what it appears. Navigating the murder of her husband and her own complicity, Annalise Keating could give Machiavelli a run for his money when it comes to her machinations. Annalise would go on to pin her husband’s murder on her lover, a move right out of the pages of the Femme Fatales handbook.

After a brilliant turn as the Doctor’s bff/archnemesis The Master on Doctor Who, Michelle Gomez gifted Netflix viewers with her sultry succubus Lilith. On the day of Sabrina Spellman’s 16th birthday, Lilith steals the identity, job, and boyfriend of the town prude and manages to raise all kinds of hell while looking like she walked straight out of a pinup calendar about naughty school teachers. While her main mission is to keep Sabrina in a morally gray area, Lilith has no qualms against using her sexual prowess in enticing men to their deaths. For a woman who’s been dealing with the Dark Lord’s mansplaining for a millennia, can we really blame her?

There is something so intoxicating about finding someone so similar to yourself you could almost be the same person. Do you love them? Loathe them? Destroy them? Romance them? In the case of Killing Eve’s Villanelle (Jodie Comer), all of the above? Killing Eve twists the Spy vs. Assassin formula by making both the spy and the assassin women, and having each find the other irresistible, against all logic. But where protagonist Eve Polaski (Sandra Oh) barrels into every scene like a charging bull, Villanelle flows, sylphlike, killing her way through Europe without even a backward glance. Her beauty, her poise, her disarming smile are all weapons she uses in her trade, but it’s her seduction of Eve, tilting the needle on the Agent’s moral compass, that makes Villanelle among the femme fatales to die for.

From the moment Tricia Helfer slinks onto the screen, guarded by two robotic foot soldiers, it was clear that this new Battlestar Galactica would little resemble the hokey space opera it was based on. Part flesh, part machine, Six is the ultimate seductress and soldier of the Cylon race. A fanatic for her cause, she uses her body and her wiles to bring about the end of the human race—or nearly so. Even after saving Doctor Gaius Baltar’s (James Callis) life, Six haunts his sleep and waking moments, a constant temptation. Ultimately, Six—all of them—find redemption through making an alliance with their enemy, which is almost a shame. She’s just so damn good at being bad.

“You’re not too smart, are you? I like that in a man.” With an extremely backhanded compliment like that, you’d think Ned Racine (William Hurt) would know better than to get involved with bored trophy wife Matty Walker (Kathleen Turner). A woman like Matty, however, if she were to run you over with her car, you’d sit up, thank her, and ask her to back up and do it again. A combination of lush femininity and aggressive sexuality, she drives Ned to such distraction that he breaks down a door to have her. Her convincing Ned to kill her husband is all part of a long con she’s been planning literally since high school, with an admirable single-mindedness. Turning men’s brains (and their pants) to mush is just a delightful bonus, especially when she convinces them that she loves them. Matty truly enjoys what she does, and that’s so important in these trying times. Indeed, she’ll never have to work a day in her life.

Putting Dorothy (Isabella Rossellini) on a list of femme fatales might be a little unfair. She doesn’t mean to bring harm to anyone, she’s forced to in order to protect her kidnapped son. She’s here because of the immediate hold she has over naive smalltown boy Jeffrey Beaumont (Kyle MacLachlan), and how that hold leads him down a rabbit hole of depravity. She makes Jeffrey feel things he’s never felt before, things he doesn’t feel for Sandy (Laura Dern), the sweet young woman who adores him. Raven-haired, older Dorothy is the Bizarro World version of blonde, touchingly awkward Sandy, and the fact that they’re both desperate for the love of the well-meaning but kinda dumb and boring Jeffrey is perhaps the strangest part of this fever dream of a movie. It’s Sandy who lands him in the end, but it’s Dorothy who gets the happier ending, reunited with her son and far away from that weird, ugly little town. I wonder how often Jeffrey thinks of her.

“Amazing Amy” (Rosamund Pike) might be among the most purely evil femme fatales on this entire list. From the first moment we see her, tilting her head up at her dumb lug husband Nick (Ben Affleck) in what seems to be a loving expression, there’s nothing going on behind her eyes. A true psychopath, Amy has no genuine personality traits beyond cold calculation, first molding herself into the image her parents created of her as a children’s book character, and then later as the “Cool Girl,” the ultimate wife material who’s “a hot, brilliant, funny woman who adores football, poker, dirty jokes, and burping, who plays video games, drinks cheap beer, loves threesomes and anal sex.” Amy doesn’t hate the people who forced her into these roles — she’d have to be capable of any kind of feeling at all for that. They’re tools to get what she wants: attention, and the satisfaction of winning a game. She picked a perfect match in Nick, who’s playing his own phony role as a stand-up good guy, and now he’s stuck with her, possibly forever, but most likely just until she gets bored with him. Hopefully he meets a better fate than creepy, lovestruck ex-boyfriend Desi.

Suzanne Stone-Maretto, To Die For

The only character on the list who’s based on a real person (New Hampshire schoolteacher Pamela Smart), Suzanne (Nicole Kidman) is a ferociously ambitious aspiring TV reporter who makes the mistake of marrying Larry (Matt Dillon), who loves her but would prefer if she stayed home and had his babies instead. Rather than simply do the right thing and leave Larry, she immediately begins planning his murder, with the help of her underage lover, Jimmy (Joaquin Phoenix, already bringing his signature weird energy to a role), who brings new meaning to the word “dipshit.” Jimmy, pussy-whipped beyond all comprehension of right or wrong, stares mouth agape at Suzanne, and accepts her claims that friendly family man Larry abuses her without question. Suzanne, while not necessarily brilliant, is savvy, and she knows a dupe when she sees one. It means very little to her to destroy multiple families to get what she wants — the way Suzanne sees it, it’s all part of a great story of a beautiful woman who overcomes adversity and fights her way to the top.

There are love triangles, and then there’s whatever small-time con man Roy Dillon (John Cusack) gets himself into in Stephen Frears’ The Grifters. Although it’s questionable how much anyone has any real feelings (other than for themselves), Roy’s weird romantic entanglement with fellow swindler Myra (Annette Bening) only gets weirder with the reemergence of Roy’s estranged mother, Lilly (Anjelica Huston). Roy has some, uh…complicated emotions when it comes to Lilly, who uses that to her full advantage. Their scenes together crackle with an unsettling energy, and the very end of the movie, Lilly, desperate for money to escape her murderous boss, takes things to horrifying lengths. When she wails over the dying Roy, it may be the only time that she expresses grief for anyone but herself, but by the time she enters the elevator with the money she’s killed her own son for, she’s all business again. It’s just another day in the life of a grifter, some people make it, some don’t.

–Kathie Moffat, Out of the Past 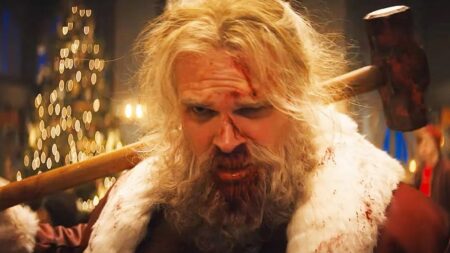 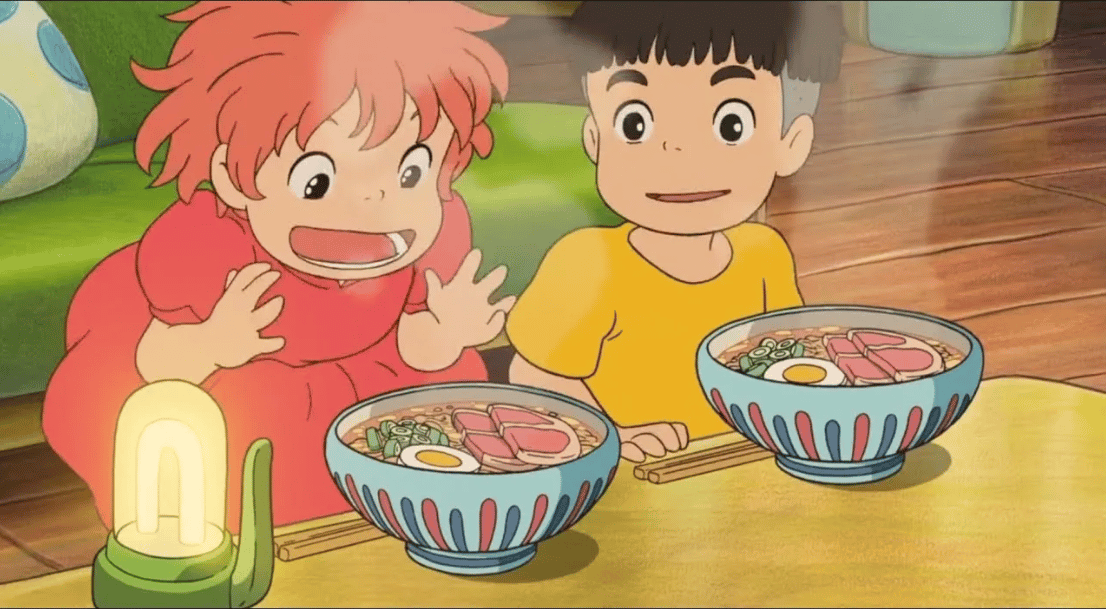 The Simple Pleasures of “Ponyo”

One of Hayao Miyazaki's lighter, sentimental films is a celebration of ordinary life & parental love as seen through the eyes of a child. 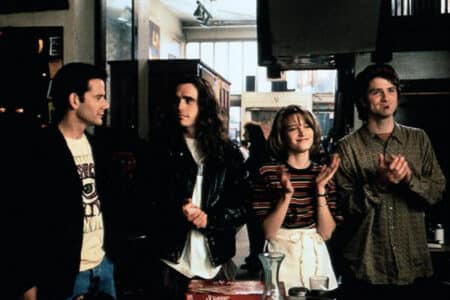 A look back at Cameron Crowe’s charming ensemble comedy about love in the grunge era.