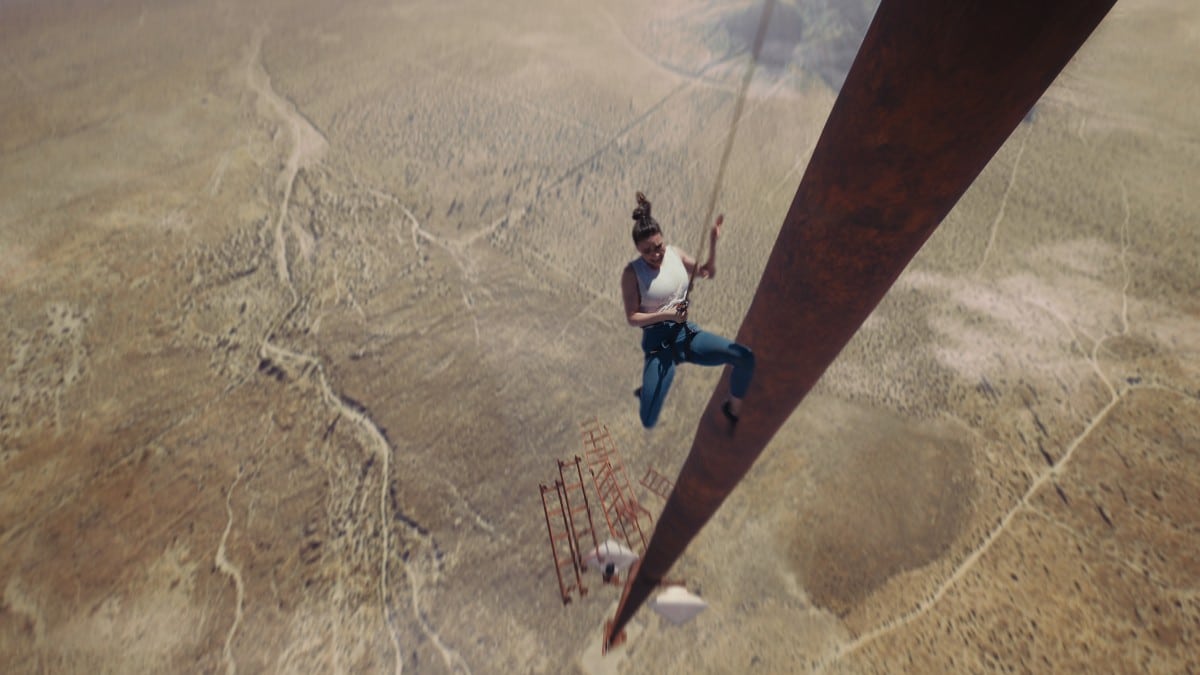 Grace Caroline Currey’s quest to move through grief is familiar, but her doing so at over 2000 feet is welcomely intense.

Ladies, sometimes life deals you a rough hand. Sometimes, in the blink of an eye, you can lose someone or something infinitely precious to you. Grief is so easy to slip into, it’s hard to pull yourself out of that darkness, but you know what will help? Spelunking. Or maybe ocean kayaking. Or, in the case of director Scott Mann’s Fall, climbing a 2000+ foot tv tower in the hopes that doing so will help to push through the horrifying memory of your husband’s death in a climbing accident.

Wait, that doesn’t seem like it would help at all!

Following the death of her husband Dan (Mason Gooding), widow Becky (Grace Caroline Currey) remains deep inside a checklist of movie grief. The house is a mess, she drinks herself to sleep, and she listens to her husband’s voicemail just to hear his voice. After an attempted intervention by her father (Jeffrey Dean Morgan, mostly appearing in a handsome phone contact photo), Becky gets an unexpected visit from her best friend Hunter (Virginia Gardner). Now an obnoxious YouTube personality named “Danger D”, Hunter has come to recruit Becky for a new climb–the 2000+ foot B67 TV tower. Hunter thinks that 1. She’ll get amazing footage for her channel and 2. This is just the thing to snap Becky out of her depression and she can scatter Dan’s ashes when they reach the top. Up at dawn and down before lunchtime! What could possibly go wrong? Spoiler alert: they get stuck up there.

What follows is a formulaic but exciting take on a set of tropes that horror/thrillers have turned to again and again: A dangerous location (even if things go as planned). A series of unforeseen and unstoppable events lead to our heroines being trapped. A variety of plans to get themselves out of there go awry. Some soul-searching and soul-baring. If this all seems like a negative review, oh it isn’t! When Fall is about the pressing dangers of the friends’ situation, it’s great, all dizzying views both up the tower and down, with near-seamless CG making up the tower as a whole. As someone afraid of heights, every shot that captures the sheer height of the tower made me shiver, and even before things went wrong all I could think was “Why”. Why would anyone go up there? For fun?! Subsequently, I can’t speak much about the realism of the climbing equipment, techniques, etc, but they all seem legitimate to me. And not nearly substantial enough for my peace of mind.

The issues with Fall come whenever the tower stops being the primary antagonist and we return to the interpersonal issues between Becky and Hunter. We’ve seen it. We’ve seen it a lot. Hunter has pulled away since Dave’s death; Becky doesn’t know how to go on without him. Hunter has a thousand influencer aphorisms but seemingly little real emotion that she’s initially eager to share with her best friend. Becky has her late husband on so high a pedestal that it’s clear he doesn’t deserve it. Hashing out all of life’s issues on film when the protagonists become trapped (maybe in a shark cage or maybe in the ocean) becomes more tiring every time it happens. The film telegraphs the Big Conflict between Becky and Hunter from minute one and reveals it in a moment lifted almost wholesale from the aforementioned The Descent. I won’t give it away here, but if you think that you’ve guessed it, then you probably have.

There’s a lot of spare time on the tower that’s meant to show the passage of time and their growing despair but ends up feeling repetitive, this also makes the final fifteen minutes (when things pick up again and how) feel almost too packed. Our heroines get more pain and suffering heaped upon them until it becomes less a survival picture and more of a slog. What more could possibly happen? And is it all necessary? The revelation that Mann used deepfake tech to cut out the swears explains a certain sanitized feeling to the proceedings–injuries plague Becky and Hunter, they find out dark truths about their friendship, they’re stuck on top of a rusted tower, and they can’t say “fuck”? That this movie can feature vertigo, blood, tension, and YouTuber behavior but can’t have too many f-bombs is an almost comical indictment of the rating system.

Though the language could stand to be saltier (let’s be real here, who wouldn’t be non-stop swearing in this scenario?) writers Mann and Jonathan Frank have crafted a neat little thriller with a fun twist on a trope. While falling (hee) flat on the character side of things, Fall is a tension-filled good time. It’s likely to cause more than one viewer to watch from behind their hands, and what more, ultimately, can any thriller want? Go see Fall, and stay off of TV towers.

Fall is now playing in theaters. 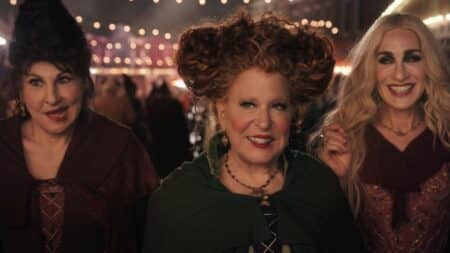 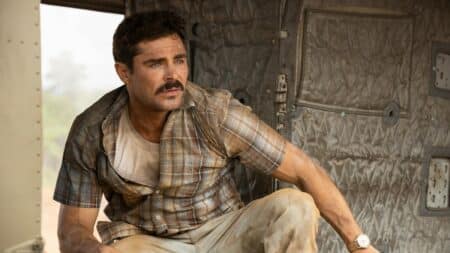