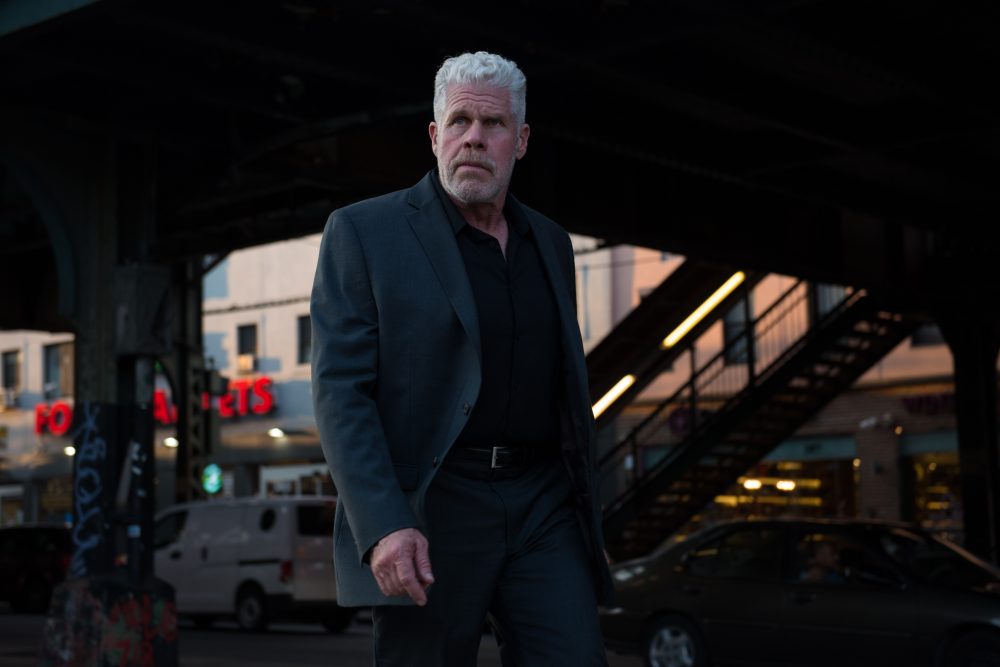 Try as they might, even genre giants like Ron Perlman and Famke Jannsen can’t elevate this dull, by-the-numbers hitman thriller.

The ‘90s were peak years for the hitman genre. Between Tarantino, Rodriguez, and Jarmusch, the way we think about and view these agents of quiet doom has informed a lot of how we tell their tales. Their action scenes are more intense, the emotions and humanity of its characters deeper, the images of black-tied men with exaggerated accents cast aside for portrayals grounded at least partially in reality. Asher, however, seems content to exist in those early years of the ‘90s before these visionary directors came along, resulting in a dated, dull film that pulls its punches on both its emotion and action.

Asher follows its titular character, an aging hitman (Ron Perlman) who makes a modest living receiving hits out of a Brooklyn laundromat. Most of his orders come from a generic mob boss of some mysterious allegiance (Richard Dreyfuss). However, during a hit, Asher has a minor heart attack and meet-cute-falls into the apartment of Sophie (Famke Janssen). The two strike up a immediate relationship which only becomes more complicated when Asher’s newest hit begins to unravel in ways he doesn’t anticipate.

One of Asher’s most notable attributes is its stellar cast – which is a shame, since they’re sorely underutilized. There are few moments within the film where any of the cast seem to feel anything other than boredom. While Perlman has made one hell of a career with quiet, intimidating characters, here his grizzled enforcer just seems tired. Granted, that sort of thing could work: the idea of a hitman becoming bored with his job instead of exhausted isn’t a super well-worn path, but here it feels like a disappointing byproduct of poor direction. Much of this comes from the fact that Dreyfuss, Janssen, and Peter Facinelli all emote the same bland indifference in 90% of their lines. The sole standout is Jacqueline Bisset as Sophie’s dementia-riddled mother, who’s only in two scenes (much of her story being told by Janssen in single-line bursts of exposition). But when Bisset is onscreen, she’s able to infuse her character with enormous energy.

It also doesn’t help that Asher is an action-drama with poorly filmed action. Michael Caton-Jones (who attained success in the ‘90s with Doc Hollywood, Rob Roy, and The Jackal, followed by the infamous Basic Instinct 2) doesn’t seem to know how to handle these moments of intimate violence. Most of the gun fights are short and to the point, but they are often shot a little too far from the action and with a single-shot style. Instead of the frantic moments and the feeling of intensity, each fight scene is over before it even feels like it’s begun. One fight in a restaurant bathroom is even hidden behind a stall for half of its duration. Asher never really feels in danger, which causes the fights to feel bland and dull. Much of this single-shot, fixed camera style extends to the rest of the film. More often than not, it feels more like a low-budget indie pulled from the pre-Tarantino ‘90s than it does a movie made in the last year.

None of this is helped by Jay Zaretsky’s dull, cliché-ridden script. The motivation behind Asher’s hits are kept hidden from the audience, but when the reason his last hit went sideways is finally revealed to the audience, nothing to that effect has been seeded in the first two acts to make it feel natural. It’s a reveal that says, “Well, this is one of the only remaining characters, so it had to be him” more than a natural progression of the story. Much of the plot moves forward more out of convenience than action – at its worst, there are moments akin to The Room’s “it’s definitely cancer.”

Asher feels like a movie that can’t decide what it wants to be. One moment it’s action; another, it’s dark romance; The next, honestly engaging family drama. To be fair, a (good) movie can be all three. But only if it commits, which Asher never does. Instead, it comes across as three films edited together into one. At its core, though, Asher just can’t climb out of the depths of its direct-to-video exploitation attitudes.

Asher cleans its guns in theaters, digital and on VOD Friday, December 7.