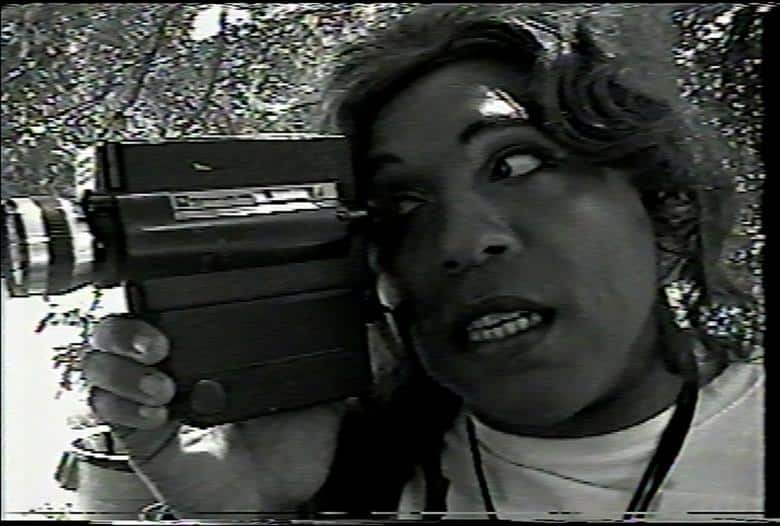 A new exhibition at the Art Institute of Chicago highlights the transgressive days of Vaginal Davis’ dial-up camp.

On their 1999 eponymous debut, riot girl group Le Tigre penned an ode to the artists that inspired them. As a teenager in the early 2000s, a simple song helped expose me to a new world of underground and queer artists. The lyrics read like a roll call: Marlon Riggs, The Slits, Yoko Ono. One name stuck out to me: Vaginal Crème Davis. I fired up my modem and found the multi-disciplinary artist’s gloriously Web 1.0 home page. I read her blog and listened to recordings of her various bands, and a truly memorable monologue: Peni of the Stars.

Unfortunately, since I was accessing this through a 56k modem, there wasn’t a way for me to stream her films. Even now, it’s not particularly easy to find her deliciously low budget movies on the modern Internet. And so, some 16 odd years later, I was finally given the chance to see Ms. Davis on the big screen. In conjunction with an exhibition of Vaginal Davis’ work at the Art Institute of Chicago, the School of the Art Institute of Chicago kicked off the spring 2020 season of their Conversations at the Edge series spotlighting the artist. Ms. Davis sat down with curator Solveig Nelson to screen and discuss five of her short films: ¡Cholita! (1995), Dot (1992), That Fertile Feeling (1982),  One Man Ladies (1996), and Wo ist Manfred? (2003).

Vaginal’s work is campy and earnest, with over the top performances and ad-libbed dialogue. The political messages sit behind this flamboyant façade. Davis says she refuses to be “didactic” in her message, rather she allows the absurdity of the films’ subjects to be played out to let the audience draw their own conclusion. This was best demonstrated in That Fertile Feeling and One Man Ladies.

That Fertile Feeling is the comedic tale of Vaginal’s best friend Fertile La Toya Jackson’s delivery of “eleven-tuplets” in her boyfriend’s living room after being turned away from the hospital due to lack of insurance. As Fertile lays on the floor dramatically pantomiming the pains of childbirth as Vaginal screams “There’s more babies,” all the while the boyfriend cleans the apartment in the background, naked. As soon as she finishes giving birth, Latoya bolts out of the apartment and begins skateboarding away. The film is hilarious and ridiculous and continuously escalates, and underneath this insanity, Davis is deconstructing the stereotypes of people of color giving birth to an unending stream of children they can’t take care of. By turning this stereotype to farce, Davis demonstrates their ridiculousness.

One Man Ladies was truly the standout of the screening. A joint project between Davis and NYC-based drag queen Glennda Orgasm, the short features both walking the streets of Midtown Manhattan, preaching to random women the gospel of radio self-helper Dr. Laura Schlessinger and her book Ten Stupid Things Women Do to Mess Up Their Lives. Dr. Laura has a long history of making homophobic comments and drew the ire of many in the LGBTI community in the ’80s and ’90s. Glennda and Vaginal poke fun at the famous psychiatrist by repeating the ridiculous slogans such as their goal of a ring on the “third finger, left hand.”

The most scathing, and hilarious, critique of Dr. Laura comes when Glennda tells Vaginal she’ll read Ten Stupid Things after she finishes Leni Riefenstahl’s memoirs. The two then discuss how Leni was the original feminist, and chant “Listen to Leni! Listen to Leni!” One Man Ladies is truly a masterclass in throwing shade. The sequence was originally an episode for Glennda Orgasm’s public access TV show and is a nostalgic reminder of a bygone art.

There’s a guerilla filmmaking quality and DIY aesthetic that endears the viewer to Davis’ work. It’s unpolished and poorly edited (if it’s edited at all). Dot, where Davis plays Dorothy Parker unsuccessfully trying to woo a male friend, is presented as shot: with bad takes left in and Davis telling the cameraperson “cut.” Despite these rough aspects, the film is also sprinkled with artistic touches: a wonderful DIY credit sequence with titles written on napkins being set, and a great close up shot of Davis’ mouth as she says “You might as well live” over and over.

During the discussion, Davis talked about how her films were made for her and her friends, not for an audience. This shines through with Dot, this is a film made by friends taking an idea to a silly extreme, turning Dorothy Parker into a person who says things like “I’ve never met a man whose butthole didn’t taste good after 14 whiskey sours.”

Davis says she refuses to be “didactic” in her message, rather she allows the absurdity of the films’ subjects to be played out to let the audience draw their own conclusion.

Vaginal Davis is a singular filmmaker, and her films serve as a time capsule for the DIY queer scene of yesteryear.

The White to Be Angry is on display at the Art Institute of Chicago from February 1st to April 26th, 2020. You can also check out the schedule for other Conversation at the Edge events here.