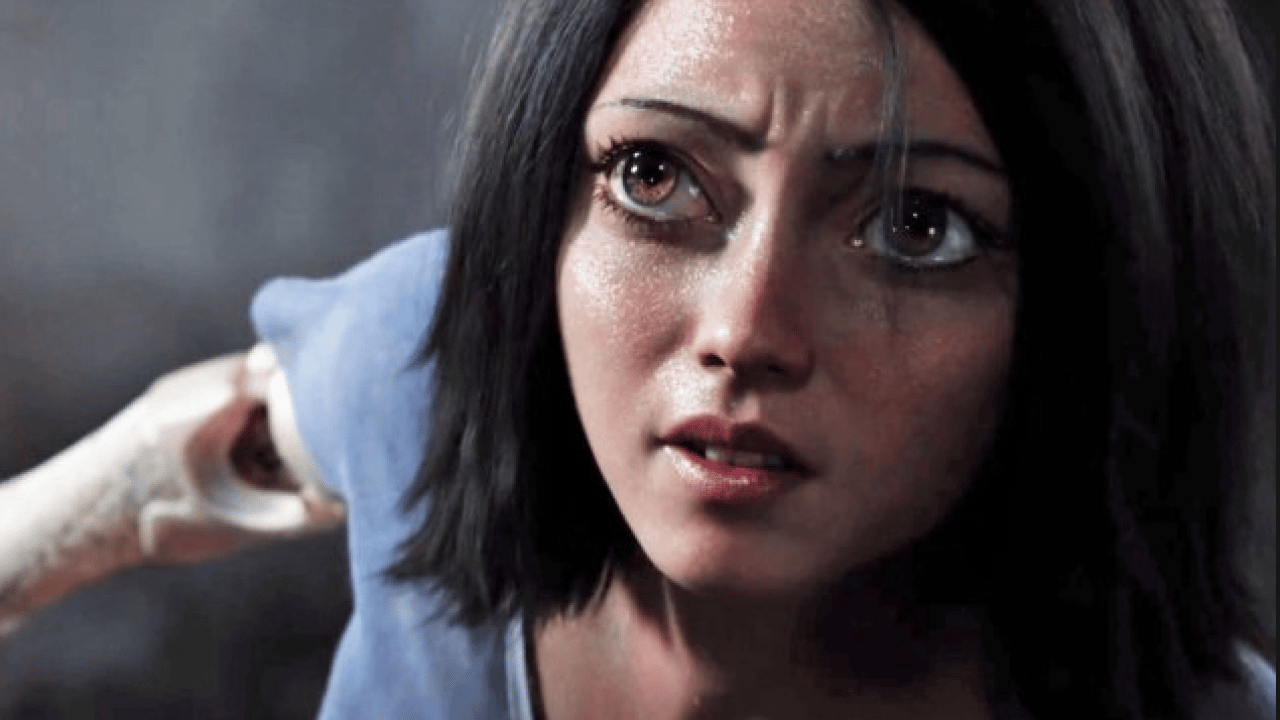 Robert Rodriguez and James Cameron adapt the 90s anime to full, Uncanny Valley effect, and if you’re into that sort of thing it excels.

Alita: Battle Angel is a lot. The movie whirls, dervish like, from plotline to plotline, theme to theme and metaphor to metaphor, brushing the surface of, but never really settling on, anything. That’s not a bad thing – it’s a kinetic blast and isn’t ever not interesting, but it takes a minute to get used to its whiplash tone and herky-jerky plotting.

It’s a dazzling action movie/teenage romance about parents and children and grief and nature vs nurture and how extreme poverty and the promise of economic relief can corrupt the soul and the healing power of love. It also touches on race relations and how sports are a distraction from poverty and degradation that are used as an empty promise for social and economic mobility. Because it’s also a sports movie. And it’s all happening in a gorgeous futuristic city filled with exotic costumes, architecture, and vehicles.

Alita belongs in the pantheon of great visual spectacle, gonzo sci-fi cult movies with The Fifth Element, Dark City and Speed Racer. If that sounds like a recommendation, then, by all means, see it. If it doesn’t, well, you do you I suppose.

The movie begins, as many movies do, with a man finding the head of a girl in a city-sized landfill. The man is Dr. Dyson Ado (Christolph Waltz), a medic living in Earth’s ruined “Iron City” in the year 2563. Society bifurcated centuries ago with the rich moving to fabulous cities floating miles above the planet’s surface and the blight and poverty that remains grounded. Iron City exists to manufacture goods for the floating city of Zalem and as a depository for Zalem’s refuse.

Ado and his wife Chirin (Jennifer Connelly) were both expelled from Zalem for murky reasons having something to do with their handicapped daughter. When she died, their marriage disintegrated and when Ado finds the intact cybernetic head among the garbage, he takes it home and installs it in the body he developed for his doomed daughter. When the girl (Rosa Salazar) wakes up in her new body, she finds that she can’t remember who she is or where she came from. She can’t even remember her name, so Ado calls her Alita, the name of his lost child. And that’s just the first ten minutes.

Getting into the mechanics of the plot would be dull and does a disservice to what Alita is really about. But it’s also impossible to express just how dense the movie is without spending a little time unpacking the basics, so bear with me.  Alita meets a cute boy named Hugo (Keean Johnson) and is instantly smitten. (It’s weird if you think about it, because she’s either a day old or, if you go by when Ado theorizes she was built, over three hundred years.) Either way, a relationship with a teenager seems like a bad idea. Also, she’s a robot and he’s a person, but whatever, nobody’s got time to really consider the implications – there’s too much to see and do.

Hugo works for Ado on occasion and spends his free time with his crew training to play Motorball – a sort of cross between rugby, roller derby, and robot wars. Every year the Motorball champion is allowed to go to Zalem, which would allow Hugo to escape the desperation and poverty of Iron City. Motorball is run by Vector (Mahershala Ali), a sinister sports commissioner/gangster.

Vector is the right-hand man of the mysterious Nova, a power broker up in Zalem who masterminds just about everything that happens in Iron City and wants Alita dead. Vector is also in bed, literally and figuratively, with Ado’s ex-wife Chirin. Chirin lost her faith when she lost her child, and she’s determined to do whatever it takes to return to Zalem and restart her life.

There’s a lot more: it turns out Ado moonlights as a bounty hunter; and his distress at learning that Alita wants to be one too; and the Motorball tournament is probably fixed; and, oh yeah, Alita might also want to be a professional Motorballer; and there’s roving gangs of masked scavengers who jack up cyborgs and steal their parts and sometimes kill people for reasons; also Jeff Fahey shows up for a second as a cyborg in a cowboy hat with a pack of viscous robot dogs.

And that doesn’t even get into the visions Alita has of her old life as a soldier in a war on the moon. Did I mention that it’s super violent and that robots get decapitated and eviscerated and people get cut in half and serial killed? Also, Jai Courtney shows up, but only for like, a second, so don’t get your hopes up.

James Cameron produced the film and co-wrote it (with Altered Carbon‘s Laeta Kalogridis) and his themes are all over the place. You have your weird fractured family dynamics, the ambivalence about technology, the fascination with social and economic stratification, environmental ruin and, of course, women trying to find the balance between their violent and familial dimensions.

But Cameron’s ideas don’t get to really breathe the way they do in the movies he directs. This is the shortest movie he’s had a hand in writing since 1985’s Rambo: First Blood Part 2 and you can feel him straining to fit every concept into tighter restraints than he’s used to. Director Robert Rodriguez specializes in down and dirty grindhouse quickie action movies that are propelled forever forward by humor, enthusiasm, and grit. He’s a crackerjack action director and good with group dynamics and kids, as demonstrated by The Faculty and his Spy Kids movie; these skills are put to good use here, as he manages to infuse the teen love story with a cheesy charm.

Rodriguez is a director who understands and appreciates textures; he makes nice little choices like pausing on a cyborg street performer happily strumming a guitar that brings back memories of El Mariachi and Desperado. But also makes Iron City feel like a lived-in, place, filled with people and cultures and art outside of the drama of Alita and her friends.

What ultimately sells the movie though, is Salazar, who is incredibly winning as Alita. She manages to ground the crazy plotting and kaleidoscope world in a surprisingly human way. Salazar plays Alita as an open and wondrous teenage girl who is just so excited to be out in the world experiencing things for herself. Every minute of her performance is believed, even when the effects and those giant eyes let her down.

Rodriguez, to his credit, also takes time from the insane rush of the plot to allow her small moments to just experience being alive. In one scene, Alita tries chocolate for the first time and her face lights up with pleasure and delight; in another she’s riding with Hugo on the back of his weird future unicycle thing the wind blowing through her hair. Later, she punches a twelve-foot robot dead in the eye and tells him to fuck himself. It’s totally wicked.

As Alita, Salazar is called on to do a lot – she has to credibly play an innocent newborn robot girl with gigantic (occasionally creepy) eyes who is also a totally badass brutal warrior and have a compelling, believable, romance with a greasy bad boy and she pulls it all off.  She’s a wonder to behold, as is the film that surrounds her.