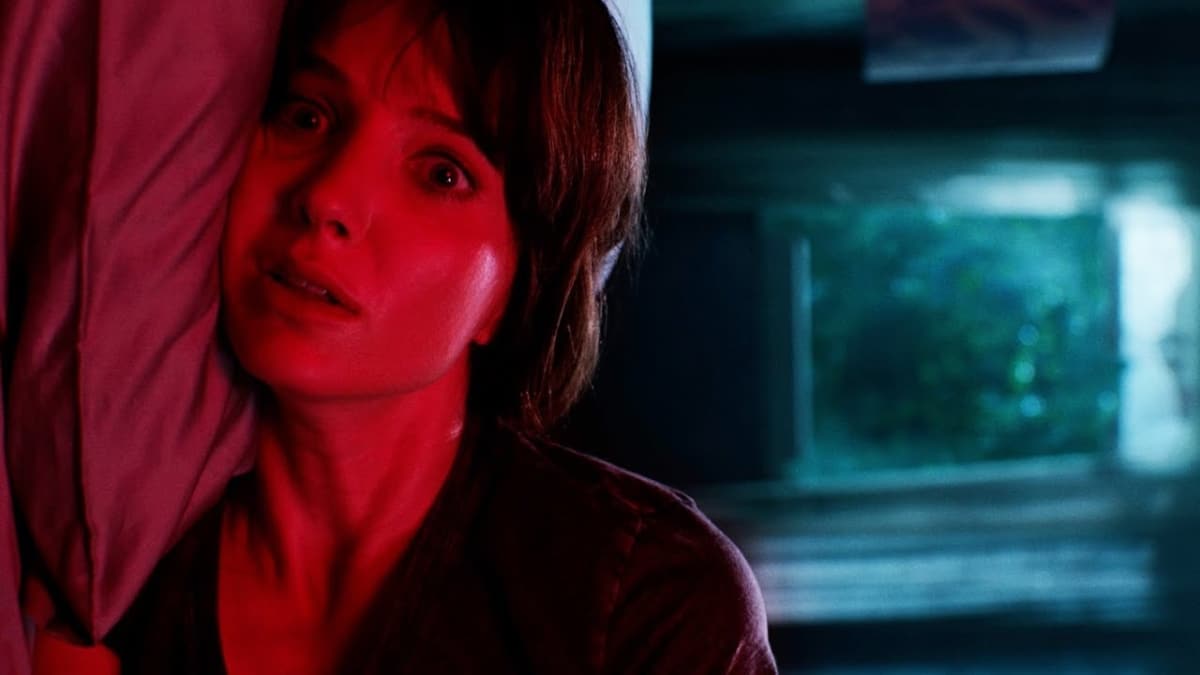 While we spent a lot of time debating whether or not “elevated horror” is a real thing or just something film snobs made up so they didn’t have to be embarrassed about liking a scary movie, gore fell to the wayside. There was a period when we weren’t getting an acceptable amount of blood and guts, in favor of understated chills and psychological trauma. Not that there’s anything wrong with that, of course, but it’s left something lacking in the genre. With Nia DaCosta’s take on Candyman and the upcoming Halloween Kills, however, it looks like old-fashioned look-between-the-fingers horror is back in all its splattery glory. Add to that list James Wan’s Malignant, often very silly, but always with a self-aware wink at the audience, with a body count that will satisfy even the most jaded horror fans.

Annabelle Wallis is Madison, who, after she’s attacked and her abusive husband horrifically murdered in their home, quickly finds herself the primary suspect. The fact that her husband’s body was found twisted like a pretzel in a way that no human hands should be capable of is of little consequence to the detectives investigating the scene, all other clues point directly to Madison. It becomes apparent, however, that there’s a separate being at work here, a hideously disfigured man wearing a Hot Topic duster jacket and calling himself Gabriel. Gabriel seems to be working some stuff out with a series of doctors, often using a mean looking golden dagger fashioned from a trophy.

Madison, who has some sort of psychic connection with Gabriel despite being unsure of his identity, sees the murders he commits as they happen, in her dreams. With the police closing in on her and not exactly open to the idea of psychic connections, Madison, along with her supportive sister (Maddie Hasson), seeks to figure out who Gabriel is, and how to stop him before she’s forced to be held responsible for his hideous crimes.

The first thing you need to know about Malignant is that you’ll likely figure out the twist about twenty minutes into it. I figured out the twist, and I watched all of The Usual Suspects convinced that Gabriel Byrne was Keyser Soze. It’s entirely possible that Wan, along with screenwriter Akela Cooper, intended it to be obvious, saving the “what the f…” part for how the twist is fully revealed. The last fifteen minutes is a symphony of gore, as the villain slashes, stabs and crunches his way through a police station (avoid this movie if you have an aversion to broken bones, because there are a lot). It’s so gloriously, entertainingly over the top that it makes up for the several gaping plot holes that nobody involved made even the slightest attempt to fill.

In a role that requires her to be emotionally tormented from the moment she appears on screen, Wallis is both sympathetic, and chilling. How much she does or doesn’t know about Gabriel’s origins seems to change from scene to scene, but I’ll be charitable and say that’s more to keep the audience on their toes than an issue with the plot. While his films don’t tend to be as emotionally charged as those of his colleague in horror Mike Flanagan, Wan knows how to elicit a genuine sense of wide-eyed trembling fear in his actors, as they confront a villain who they often can’t see until he’s literally falling on them. It’s not a particularly scary movie, but you certainly believe the characters themselves are scared, that’s enough.

Malignant [is] often very silly, but always with a self-aware wink at the audience.

Malignant is sorta psychological horror, but it’s also body horror, and an old-fashioned slasher flick too. The word “Giallo” is being thrown around to describe it, and with the red lighting and stealthy, black-clad murderer, that’s a fair assessment. But it also seems to be a tribute to the overly slick horror of the 90s, particularly in Joseph Bishara’s driving score (that occasionally sounds like it’s going to lapse into the Pixies’ “Where Is My Mind,” a clever hint). Gabriel’s voice, which, for unexplained reasons, can only be heard over radio waves or on the telephone, sounds like no one as much as Winslow Leach, the tragic hero of Phantom of the Paradise, who also skulks around in the shadows while wearing a cloak. Everything, from the twist right down to the sympathetic cop with a tough talking partner who will truck no nonsense about cloaked murderers in dreams (not yet, anyway), is something Wan and Co. (and the audience) have seen before, and filed away in their personal memory palaces.

It’s what they do with all these “homages” that counts, and in Malignant it manages to feel fresh and entertaining, particularly during that climax, which leaves the viewer feeling excited about what could happen next in a way few other horror movies are able to accomplish. That it closes on a tiresome “the end…?” note is a bit of a letdown, because it betrays everything that happens up to that point. It feels as if Wan and Cooper simply ran out of paint to spruce up old ideas, when everything else looks shiny and new.

Malignant is now playing in theaters and on HBO Max.