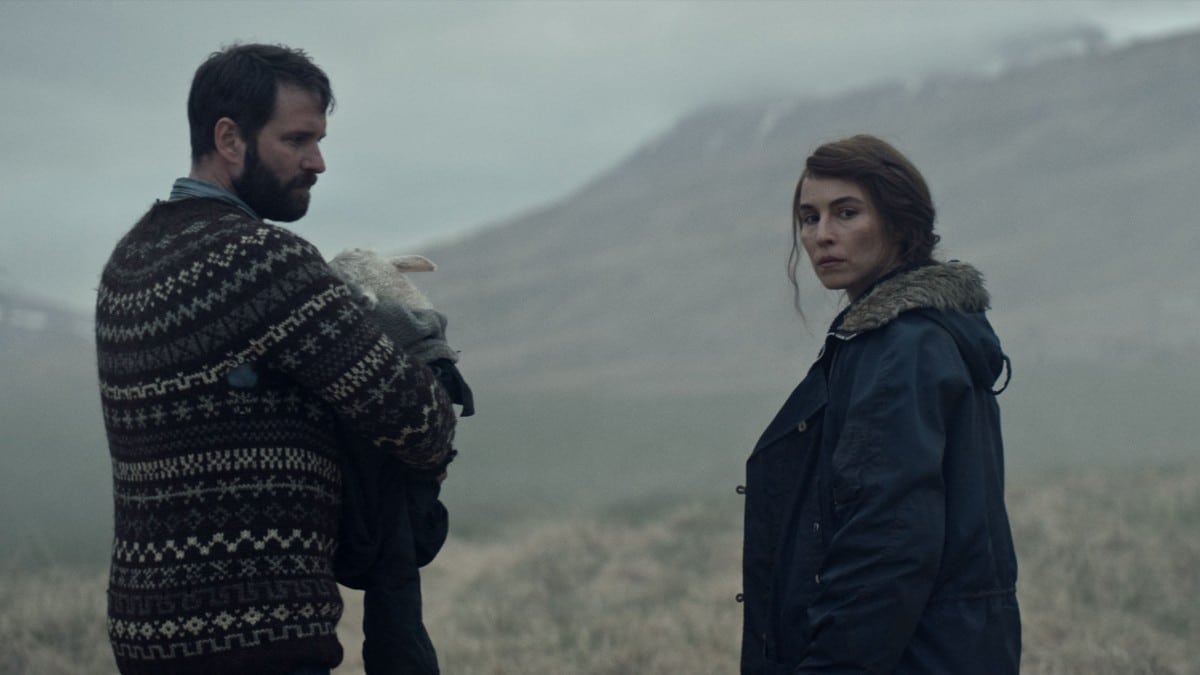 Valdimar Jóhannsson’s debut feature is moody and captivating but shaky thematics keep it from living up to its own promise.

As Shakespeare famously opined: What’s in a name? Based on the religious nature of the character’s names in Valdimar Jóhannson’s debut film, Lamb, there must be something allegorical about the movie’s plot. Yet, as compelling as Lamb is, in the final analysis, its religious symbolism amounts to little.

Set on an isolated sheep ranch and farm in Iceland, Lamb follows childless couple María (Noomi Rapace) and Ingvar (Hilmir Snær Guðnason). Their lives brighten with the arrival of Ada, a half-lamb-half-human child, born from one of their sheep. Despite the odd nature of their adopted ward, the couple create a family, eventually bringing Ingvar’s prodigal brother Pétur (Björn Hlynur Haraldsson) into their fold. The assembled family live a quiet, pastoral life eking out a living from the bleak Icelandic countryside. But while they’ve created a near-idyllic life, something lingers in the Icelandic wilderness that threatens to tear them apart.

Jóhannson’s prior work was mainly technical and included cameras, electric crews, and special effects. His background shines through in Lamb, which drips with atmosphere and visual intrigue. Jóhannson and director of photography Eli Arensen craft haunting vistas from the desolate, beautiful Icelandic landscape.

Domineering mountains loom large over the characters, highlighting both the isolation and the smallness of the characters. Like fellow livestock featuring A24 production set on an isolated farm, The Witch, muted colors and fog dominate Lamb’s visual palette, reinforcing nature’s apathy to human survival. Þórarinn Guðnason’s score appears sparingly—the film mainly opts for silence and the occasional diegetic bleat from one of the many sheep.

While Lamb’s acting and visuals are overwhelmingly successful, its plotting is comparatively uneven.

Rapace and Guðnason’s acting matches the movie’s stillness—their body language and expression doing much of the storytelling. Early in the film, before Ada’s arrival, María and Ingvar are distanced from one another, even when physically close. After the couple welcomes Ada into their lives, their relationship strengthens, and both actors use small acts of touch to portray the shift in their dynamic. When Pétur joins the story, Heraldsson brings a welcome, vivacious energy to the film that helps break some of the plot’s slow nature by directly injecting tension and levity.

While Lamb’s acting and visuals are overwhelmingly successful, its plotting is comparatively uneven. Jóhansson and novelist Sjón, who wrote Dancer in the Dark and Robert Eggers’ forthcoming The Northman, wrote the script. Lamb explores its overall themes: grief, creating family, happiness, and tragedy with subtly and nuance. But they’re smeared in a patina of religious references that consistently draw attention to themselves while never truly cohering.

All the characters in Lamb have suffered intense but undefined traumas.  Ingvar and María almost certainly lost a child before the film—if their distance from each other and the presence of an unused crib are anything to go by. Pétur arrives by being thrown out of a car and left for dead. We never know what prompted this, nor are his prior troubles and odd sexual obsession with María ever detailed. But, for all that the specifics of the ensemble’s suffering are obscured, their grief and attempts to create happiness with each other are present on the screen.

The religious aspects, on the other hand, wield themselves like a cudgel. Lamb opens with what appears to be Ada’s conception, on a dark snowy night, in a manger, on Christmas Eve. María is the Icelandic version of the name Mary, drawing a line to the Virgin Mother. Pétur is analogous to the apostle Peter.  He even takes Ada on a fishing boat while talking about lambs walking on water (for those unfamiliar, the apostle Peter was a fisherman who witnessed Jesus walking on water and was himself able to walk on water momentarily until his faith wavered). Heck, even Ada is a biblical reference to the daughter of Esau (who was a very hairy man – you know, like a sheep). Yet despite these blatant allusions, the Christian thematics never quite click. Is Ada supposed to be Jesus? Yes, she had a miraculous birth, but when it comes to textual substance beyond that, Lamb is muddled.

Despite the baffling religious references, Lamb’svisuals, acting, and the (non-religious) exploration of its themes are strong. The movie’s a slow burn, but it’s well-paced. It offers up new tidbits that keep the viewer engaged. And it’s always refreshing to watch a movie that is so unabashedly odd, and so unabashedly itself, making Lamb a worthy recipient of the “Prize of Originality” at Cannes this year. While this more than likely won’t have the appeal of some of A24’s other suspenseful offerings, it’s a strong directorial debut, and I’m interested to see what Jóhansson will produce next.