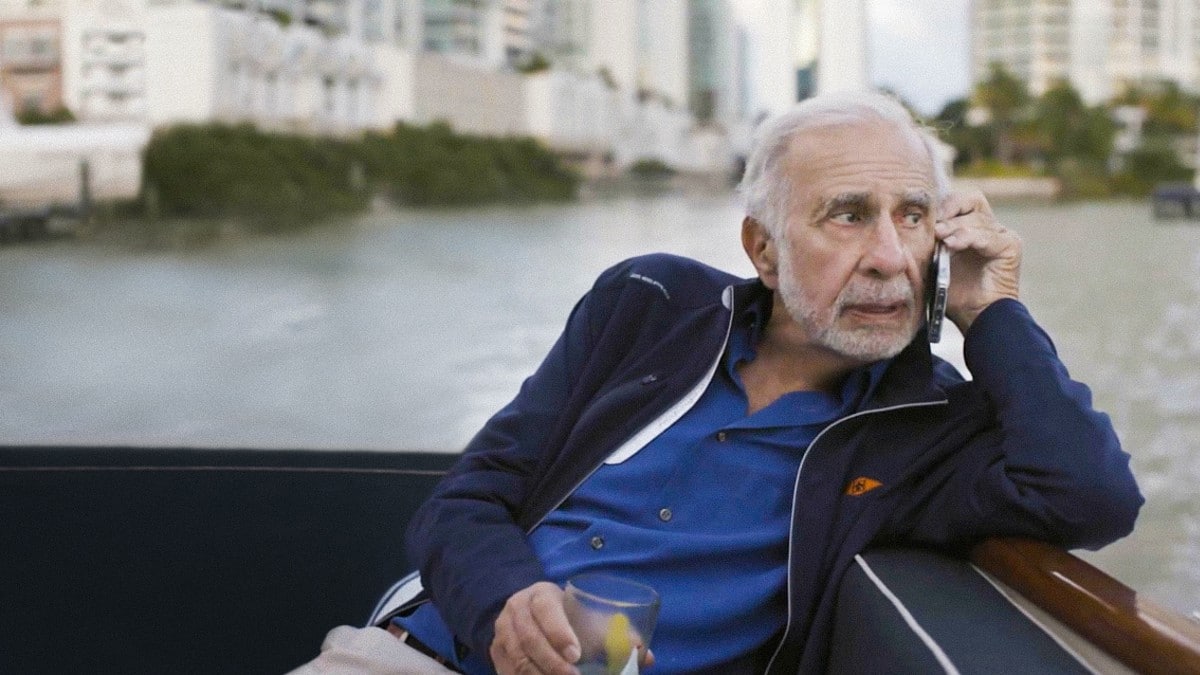 A documentary too in love with its central subject to say anything interesting.

One marker of a great documentary is a tangible and infectious passion for its central subject matter—an underlying commitment to a topic or idea that drives the very existence of the project. It’s hard to figure out what’s motivating Icahn: The Restless Billionaire, beyond a not-so-faint sense of people wanting to defend why they like an ultra-wealthy capitalist. Though the word restless creeps into the title, the lack of vibrancy in this documentary’s filmmaking indicates that lifeless should’ve been used instead.

Carl Icahn is an American financier whose present-day net worth tops $15 billion. Over multiple decades, he’s had a hand in companies ranging from Trans World Airlines to Netflix to Apple and everything in between. Having built much of his reputation in the 1980s—the heyday of Wall Street tycoons—Ichan is well-known for putting his cash behind big, bold risks. Not all of them paid off, but enough of them have succeeded, and all involved audacious business practices. The result of these investments? Icahn’s staggering reputation.

The biggest issue holding back Icahn: The Restless Billionaire is that it has no interest in delving deeply into its titular subject. Director Bruce David Klein is content to deliver a largely chronological look at Icahn’s various business ventures with a smattering of digressions into his personal life, a bog-standard format for this kind of documentary. Adhering to this predictable outline leaves little time for surprises or a more subversive structure that could lend greater insight into Icahn as a human.

The shallow nature of the movie is further reflected by the limited number of interview subjects on-hand. A handful of cable news anchors from MSNBC and other outlets provide historical context for Icahn’s life while his business associates and relatives (including his two adult children) talk breathlessly about this man’s accomplishments. Watching a supposedly comprehensive documentary about Carl Icahn limit its gaze to just these individuals is like bowling with the bumpers on; you’re not getting the full experience.

It’s telling that the individuals absent from the interview segments are either people explicitly critical of Icahn or anyone that’s working-class. Throughout The Restless Billionaire, offhand comments are made about how Ichan’s business practices have proved controversial—they result in layoffs and have otherwise adversely affected everyday people. Icahn gets plenty of time to defend his actions by way of positing that he helps create more jobs down the line, but people put out of work by Icahn’s actions are kept strictly off-camera.

The constant fawning leaves a sour taste, and worse, it makes for a repetitive and uninteresting documentary.

Klein’s exclusive, flowery look at the hyper-wealthy doesn’t just make for a shallow documentary, it makes for an occasionally careless one. An anecdote about Icahn’s time running the airline TWA that included how he subverted the demands of a flight attendant union is told alongside music and editing cues indicating that it’s supposed to be a cutesy little tale. Instead, it just shows such cold detachment from human experiences that it’s no wonder Icahn’s house features pillows embroidered with the words “Happiness is a cash flow positive”.

Attempts to demonstrate that Icahn is a nuanced human being also suffer from fumbled execution. A closing montage detailing his charity work that lingers on how noble he is for donating to “charter schools” is particularly—and unintentionally—humorous. In trying to paint Icahn as generous with his largesse, The Restless Billionaire inadvertently confirms how detached from reality he is—even his notion of “charity” only benefits the upper class.

When it isn’t exuding obliviously toxic ideas about class, The Restless Billionaire is a forgettable affair. It’s paint-by-numbers filmmaking boasting unimaginative visual aids, the latter taking the form of large on-screen text to help explain complex Wall Street banker terminology. Even a cut to an interview with Oliver Stone discussing Icahn as a partial inspiration for Wall Street’s Gordon Gecko isn’t very interesting beyond a fun bit of editing showcasing the parallels between Icahn’s comments in interviews and Gecko’s famous dialogues.

Intentionally or not, The Restless Billionaire suggests a much more interesting documentary with a late interview with Icahn himself, where he notes that winning is “a let-down” as a far-off look consumes his eyes. Briefly, a flash of complexity emerges. Ichan is a man with everything, including an underlying cognizance of how meaningless his pursuit of money and victory at all costs is. Allowing Icahn to be this vulnerable momentarily allows the doc to be more than a puff piece.

After this intriguing interior look though, The Restless Billionaire goes right back to showering Icahn with laurels. The constant fawning leaves a sour taste, and worse, it makes for a repetitive and uninteresting documentary. Closing comments from a handful of interview subjects that provide a wishy-washy assessment of whether or not Icahn should have all his money embody the unchallenging nature of the whole production. Though seemingly made to preach to a billionaire’s choir, even Ichan’s die-hard fans will be bored by The Restless Billionaire.

Icahn: The Restless Billionaire premieres on HBO and HBO Max on February 15th.