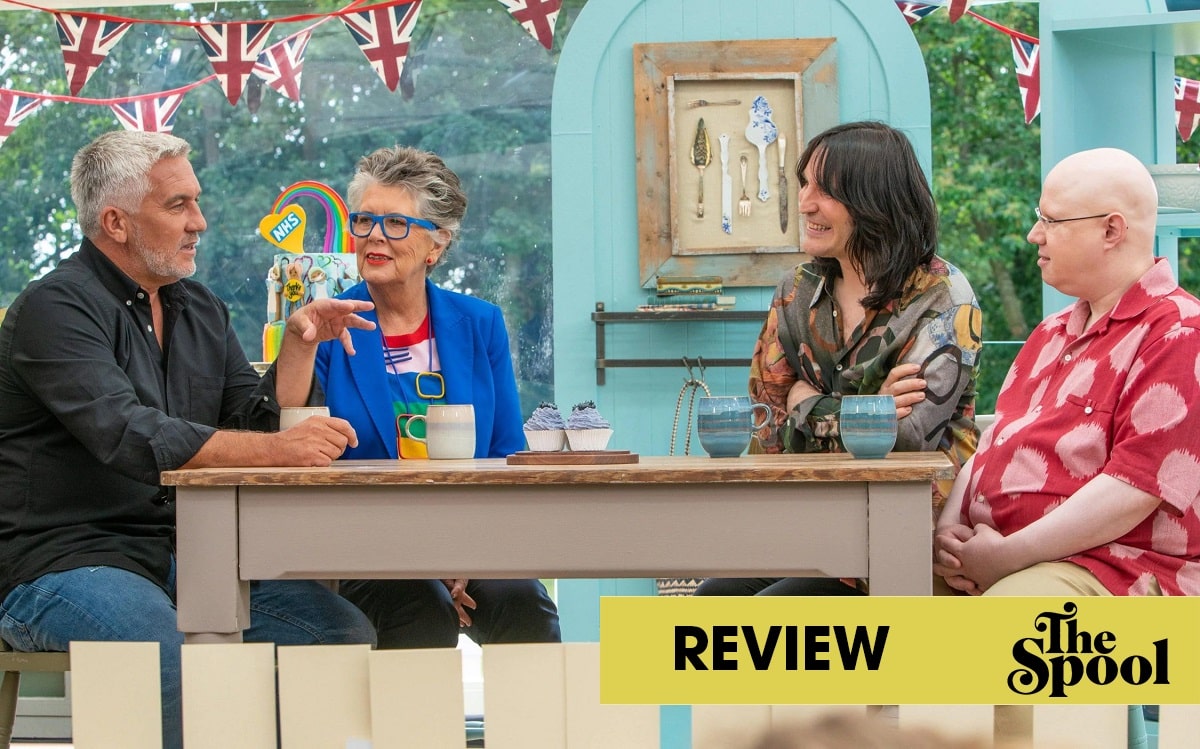 The Great British Baking Show arrives just in time to save a tumultuous 2020 with charming antics and tumbled cakes in episode 1.

Adhering to strict guidelines, the cast and crew filmed in their own quarantine bubble for six weeks, everyone living and filming together. Joining judges Paul Hollywood and Prue Leith is returning co-host Noel Fielding and new co-host Matt Lucas, who replaces Sandy Toksvig. Paul and Prue rate the bakes while Noah and Matt announce each challenge and often break the tent tension with some jokes. Without further ado, it’s time to keep calm and get your bake on!

Episode One is Cake Week, kicking off with the signature challenge, a Battenberg cake. The Battenberg is a rectangular shaped cake wrapped in marzipan, and it must reveal a pattern or design when cut inside. As Prue calls it, “every marzipan lover’s favourite cake.” So Marzipan stans, this one’s for you!

During the signature, they reveal some Tent Drama: there are two Marks in the tent! Actually one is Mark, and the other one is Marc, who also agrees to go by his dog’s name “Hamish” if that lessens the confusion. However the judges didn’t get the “Hamish” memo, so they refer to Mark and “Mark E.” Regardless, we can now crack on with the bakes!

As the signature progresses, we learn more about the bakers. There’s Peter from Edinburgh, who plays badminton with his brother! Sura lives in West London and has a black cat named Ghost! Lottie is from Liverhampton and works as a pantomime producer who, in addition to baking, loves Viking metal music and yoga! Sure, their cakes are delicious, but learning about their lives outside the tent is a tasty treat as well. I’ve always enjoyed the random mix of activities these contestants bring to the table and occasionally seeing them reflected in their bakes.

Their first technical is 6 Miniature Pineapple Upside Down Cakes, courtesy of Paul Hollywood. They have to make caramel to pour into a tin, place a pineapple ring and maraschino cherry on the caramel, followed by a cake sponge. When the tins tip over, they reveal a pineapple atop the sponge, hence the name. This challenge also brought us our first moment of the baking tray cool down, with contestants fanning their cakes with baking trays to cool in-time for judging.

Just when you think the drama couldn’t escalate further than the Two Marks, Sura goes to place her cakes on the judging table, shoos away a fly, and accidentally knocks Dave’s tray, spilling half of his cakes onto the floor! As I watched this horror unfold, I audibly gasped. Sura was emotional in that she may have accidentally ruined Dave’s cakes, and of course, Dave was the epitome of British politeness — “It’s fine.”

Not helping matters is that Sura came in first in the challenge, whereas Dave came in ninth (the judges were aware of the accident and judged his bake by the cakes that didn’t fall). I just want to get Dave a cup of tea, because the man looks like he could use one!

I’ve always enjoyed the random mix of activities these contestants bring to the table and occasionally seeing them reflected in their bakes.

For the season’s first showstopper, the bakers must create a celebrity cake bust, aiming for a cake resembling a hero of each baker. The range of celebrity heroes was wide from eclectic music heroes like Marc’s Ziggy Stardust, Laura’s Freddie Mercury, and Linda’s Bob Marley to British thinkers like Louis Theroux and Bill Bryson.

Some went with historical figures like Rowan’s Queen Marie Antionette, which felt like an odd choice considering she’s often a representation of the privileged rich classes looking down on the poor. (Read the room Rowan! It’s pandemic time, and with the rich getting richer as the poor gets poorer, I’d pick a different celebrity hero for your cake bust!) Then there’s Dave’s Tom DeLonge cake bust. Yes, audience, there’s a Brit making a cake of a musician from Blink-182, and dammit, if it isn’t amazingly horrifying.

When watching the bakers turn out their showstoppers, I felt some of the cakes could have been solid contenders for Netflix’s other baking show Nailed It. Rowan’s choux buns failed to bake, and he had to construct Antoinette’s hair out of rice paper. Linda’s Bob Marley looked it was made on a bad drug trip and lacked a mouth. Dave’s DeLonge cake looked “like a caricature,” and poor Ziggy Stardust was closer to, in Marc’s words, “Jabba the Hutt.” While Laura’s Freddie Mercury had an “exploded head,” the taste was to Paul and Prue’s liking, getting an “I love it” from Paul. Alas, there were no Hollywood Handshakes, but it’s the first episode, and I’m thinking we’ll get at least one handshake by the end of the series.

At the end of each episode, it’s final judgement time. This week’s Star Baker was Peter. His showstopper of cyclist Sir Charles Hoy, was according to Prue, “witty,” and both his Battenberg and Pineapple Upside Down cakes had great flavors. Sadly, the baker departing the tent (and quarantine bubble) is Loreia. She brought in some wild flavors, like a cream soda and bubble-gum Battenberg, and a chile-ginger chocolate showstopper, but her bakes tended to be over-baked and over-flavored. She leaves the tent with her head held high, off to quarantine before rejoining her family.

The camaraderie among the contestants is a dynamic I always love about the show, and that’s in full force this season. They’re ready to step in and help a fellow baker if their cakes are falling or need extra assembling. They rally around the departing baker, giving out hugs to comfort them before they leave the tent. The Great British Baking Show is a balm during these times, showing the good in humankind, one bake at a time. I’m glad it’s back, and I can’t wait to keep diving in for more episodes. 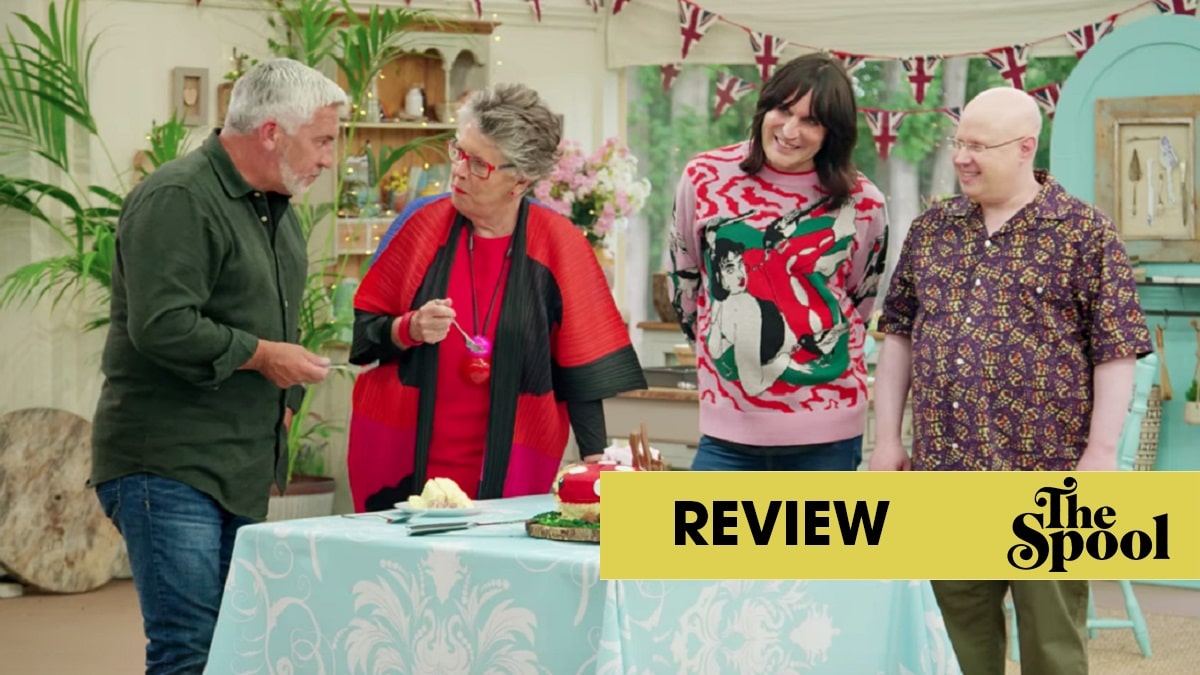 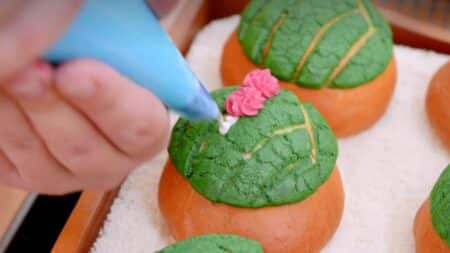 Bad jokes, wild pronunciations, and a double elimination make this week’s episode one for the book. 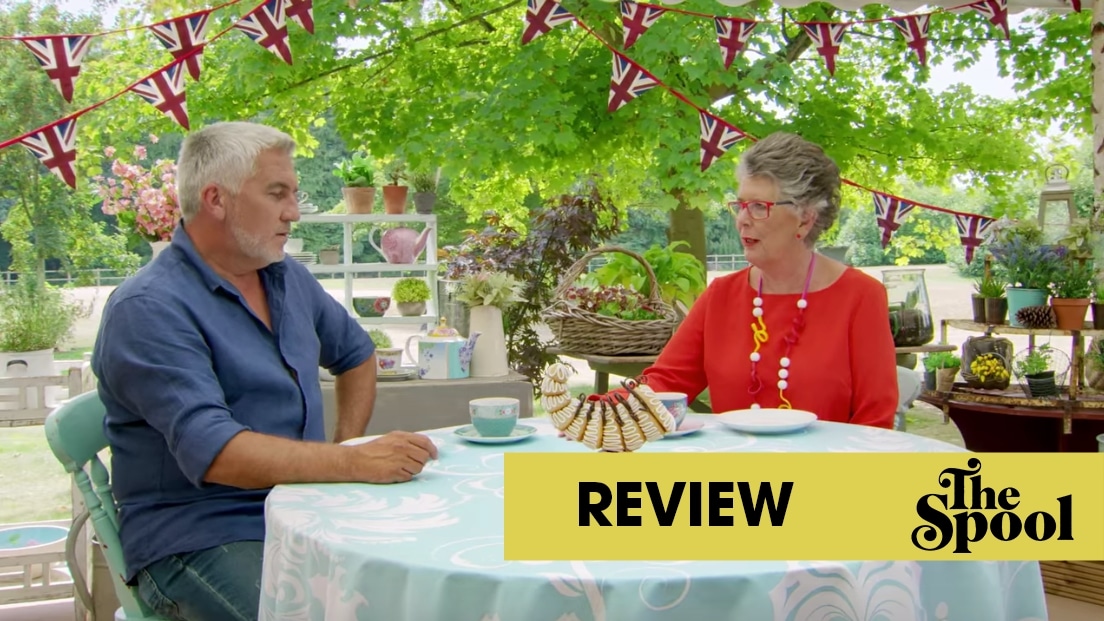 As the season draws closer to the finish line, a fan favorite is sent home.