Mike Wade (Scott Adkins) thought he could make it in Mixed Martial Arts, he really did. He couldn’t. With his career definitively over, Mike and his pride have to figure out what to do with themselves. A temporary gig on the crew tearing down Birmingham, Alabama’s infamous Castle Heights hospital is better than nothing—it even leads to a friendship with fellow crew member George (Vas Sanchez, Cobra Kai seasons one and two). But Mike’s still lost in himself, still processing the fact that his dream is capital letters DONE. And then, on the last day of demolition, mere hours before the explosives are set to go off, Mike finds a $100 bill. A $100 bill that leads to a cool three million in cash, hidden in a wall.

Ericson (Dolph Lundgren, who directs) is a relatively decent prison guard on a ledge. His daughter Emily (Ida Lundgren) is dying from a rare form of blood cancer. It is treatable, but American insurance being American insurance, his co-pay costs more than his house. On the verge of breaking, Ericson gets a lifeline. Before being imprisoned Lando (Eric Gray) stole a fortune from would-be arch-crime lord Damien Glass (Robert Berlin). Glass wants Lando dead. If Ericson helps protect Lando from Glass, he’ll get a share of the loot: three million dollars, hidden in Castle Heights hospital. Ericson, desperate, accepts.

Deacon Glass (Scott Hunter, stunts on Avengers: Endgame) is Damien’s brother. Where Damien is pretentious, Deacon is pragmatic. He’s in the game for money, money, sadism, and money. When Damien figures out that Ericson might be a lead to his money, he tasks Deacon with retrieving his ill-gotten gains. Deacon pays lip service to his expected fraternal duty, rounds up a goon squad, and promptly decides to snag the prize for himself and his equally malignant beloved Kat (Kim DeLonghi).

Everyone wants the cash, and they’ve got a strict deadline. At five PM, the charges detonate. None of the players are equipped to stop that. At five PM, the castle falls, whether Mike, Ericson, Deacon, and his crew are clear or not.

Castle Falls is a pretty good movie. It’s hampered by some choppy editing, and a fondness for tangents, particularly early on. It’s bolstered by longtime Adkins-collaborator Tim Man (Ninja: Shadow of a Tear)’s excellent fight choreography, cinematographer Frances Chen’s clean capture of the action, and Lundgren’s solid, thoughtful direction. He does strong work as Ericson and gives Adkins and Hunter to flesh out Mike and Deacon. He also does some impressive tonal balancing—Castle Falls is warm in its character work and delightfully vicious in its violence. Lundgren directs both Castle Falls‘ drama and its action well and keeps the picture coherent despite their differences in feel.

There are hiccups as the players take the stage, particularly with some odd scene transitions and a few narrative tangents—primarily related to Ericson’s story—that, while well-performed, trip up the momentum Lundgren spends the first act building. Keeping the focus either strictly on Ericson or working him into the tangents (i.e. having him witness and intervene in the attempt on Lando’s life rather than the assassination attempt, Damien’s reaction to its failure, and Ericson striking a deal with Lando all playing out separately) would help his story run a bit more smoothly.

What does work in Ericson’s story works quite well—Lundgren’s been doing neat work as an actor in his late middle age, whether as a gleefully homicidal supersoldier/preacher or as one of the ocean’s great kings. Ericson’s not as grandiose a turn, but Lundgren brings a welcome sweetness to his scenes with his daughter (played by his real-life daughter) and solid vulnerability and doubts to his scenes in both Castle Falls‘ build-up and its central cat-and-mouse battle.

Lundgren directs both Castle Falls’ drama and its action well and keeps the picture coherent despite their differences in feel.

Mike’s story by contrast, minus an awkwardly-placed early flashback dream, is clearly told and builds elegantly to the moment where Mike finds the money. Where Adkins’ last character, One Shot‘s Lieutenant Harris, was a man on a mission getting steadily more and more rundown, Mike is a man without a purpose. He’s not just struggling to find financial footing as a member of the working homeless, he’s in a rough place mentally. Fighting was his life, the thing he built everything around. And he failed at it, completely. Mike spends a significant chunk of Castle Falls grappling with that fact—and that goes about as well as the grappling in his matches went. It’s strong, internal work from Adkins.

He, Lundgren, and Man carry Mike’s struggles into the way he fights. He’s got some real skill, and that in conjunction with adrenaline and gumption can go a long way. But Mike’s not Lieutenant Harris, a highly-trained Navy SEAL on a mission. Nor is he Yuri Boyka, the Most Complete Fighter in the World. He’s a washed-up martial artist whose limits are decidedly closer to Earth. When Mike fights, it’s more luck and split-second creativity than his mastery of martial arts that let him come out on top of armed and murderous goons. The thrill comes from the way Adkins plays Mike brushing up against his limits, from the second-to-second scramble. And, on one occasion, from creative use of a disused garbage chute.

Once everyone’s gathered at Castle Heights and the clock is ticking to its demolition, Castle Falls kicks into thrill-power mode quite satisfyingly. Mike and Ericson bounce back and forth between allies and enemies, while Deacon’s snarling grows more and more vicious as the money slips further away and the explosion ticks ever closer. Hunter plays Deacon well—he’s cruel and mercenary, but not without humanity. And he’s full-on terrific during a moment where shock overrides Deacon’s scheming and general wickedness.

Castle Falls‘ action is a treat. Man’s choreography takes full advantage of the characters’ differing skill levels to build fight scenes that are as much about escape and survival as they are overcoming a deadly foe. He uses the crumbling hospital and its detritus well too—Adkins gets a great window jump aided by a firehose, and there’s a killer visual gag involving the discarded packing materials for the soon-to-detonate explosives that have everyone on a timeline. Lundgren and Chen frame and capture the fights cleanly, giving the players space to work and be seen.

The shaky parts of Castle Falls‘ setup do hurt it, but there’s a lot to dig here. Adkins does really fine work as Mike, the man lost at the end of his dream who’s an okay-at-best fighter up against armed and kill-happy jackals. Lundgren plays Ericson’s love-driven desperation with skill. Its action is strong, its drama well-played. It’s a good movie, solidly good.

Castle Falls is now playing in select theaters and available on digital. 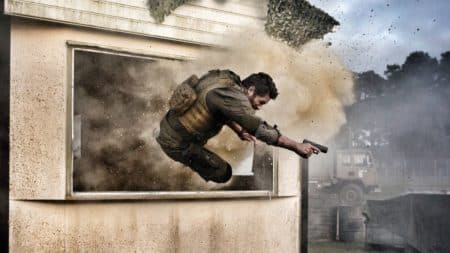 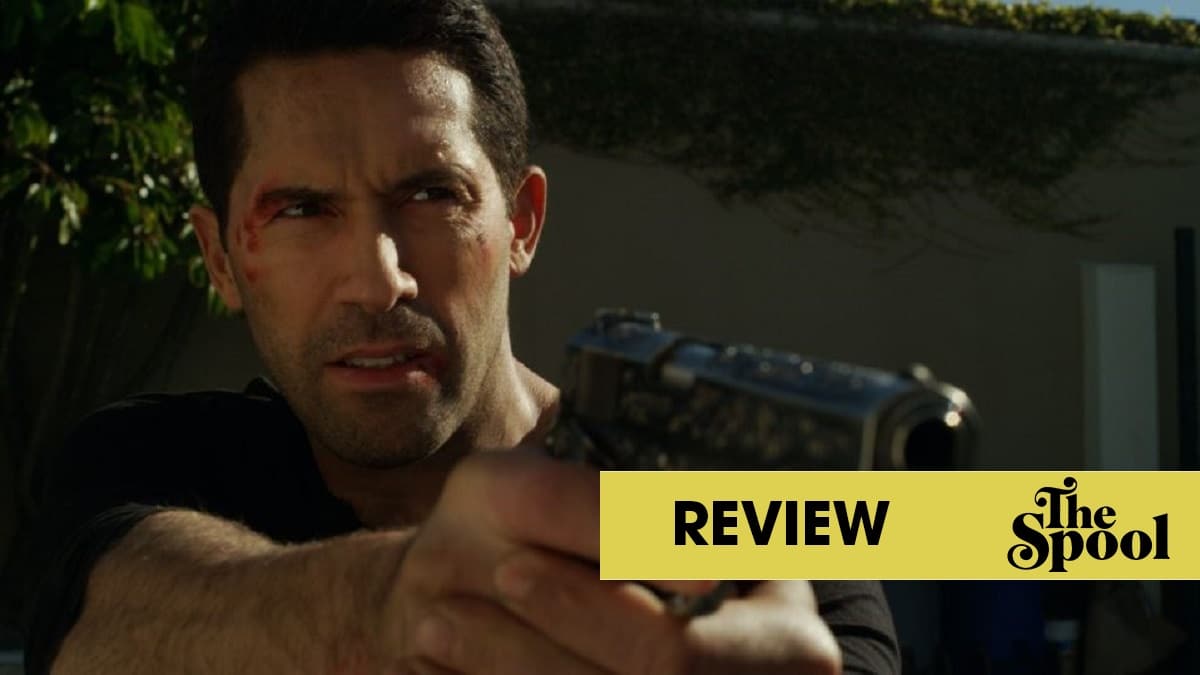 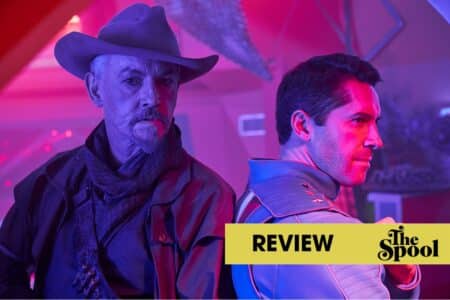