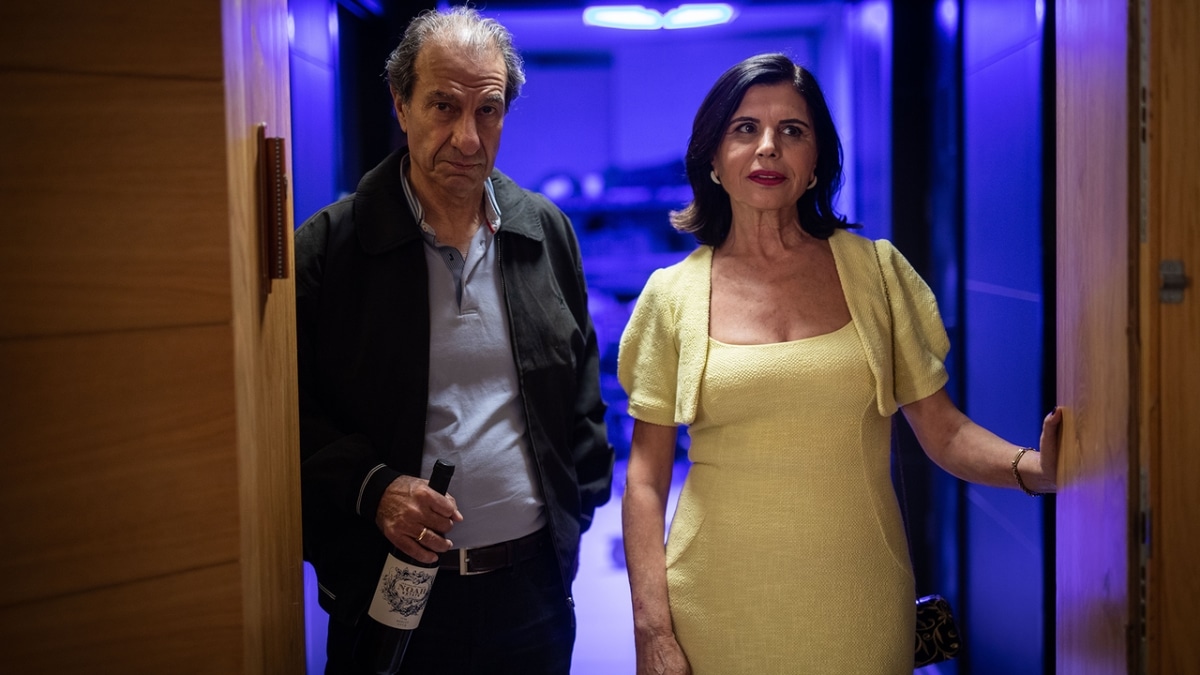 That’s the beauty of karaoke – you don’t have to know how to sing. You sing to express yourself” states Itzik (Lior Ashkenazi), the charming neighbor of Meir (Sasson Gabay) and Tova (Rita Shukrun) at his intimate penthouse suite karaoke party. It’s also the theme of  writer/director Moshe Rosenthal’s Karaoke, that even when the music stops, life is a performance full of vulnerability, mistakes, and if you’re lucky, some fun too. Karaoke is an offbeat, comedic journey that delights and surprises.

Karaoke follows Tova and Meir, a standard aging couple with 46 years of marriage and two grown daughters. They live a comfortable life, with Meir currently on sabbatical from his academic professorship, and Tova running a boutique shop. Their lives get a jolt of excitement from their neighbor from above, Itzik, who invites them to his penthouse for karaoke nights. Tova and Meir fall hard for Itzik’s energetic lifestyle. They enter into a competition amongst their other neighbors and soon themselves, trying to win Itzik’s attention.

The cast for Karaoke excel in their performances. Lior Askenazi is effortlessly charismatic as Itzik. He’s the type of guy you want hate on paper – drives a flashy Maserati, hangs out with models, and jets around the world for his work. He’s also the guy who will stand up to talkative and attention-seeking Tova, politely interrupting her diatribe at a party to ask Meir to speak, as he’s barely said anything the entire night. Itzik is the life of the party, but lurking underneath the neon glow is insecurity, a man so used to performing for others as the lavish playboy, that he can no longer turn it off.

Rita Shukrun is superb as Tova, the stern, perfectionist wife. When Itzik fails to show at the dinner she meticulously planned in her and Meir’s apartment, she’s seething with every draw of her cigarette and sip of her wine. Later that night, the sounds of melodic karaoke sounds drift down to their balcony, and Tova’s hell-bent on exacting revenge on Itzik, calling in a noise complaint to the cops. Her relationship with Meir is strained; when he calls her out on flirting with Itzik, she bluntly tells him she could have cheated on him during their marriage, had she wanted to. She enjoys Meir’s jealousy, but can’t handle the same treatment when Meir spends more times upstairs with Itzik.

Karaoke is a comedic offbeat journey that delights and surprises.

Perhaps the most moving performance is Sasson Gabay as Meir. He’s a meek man drawn to the confidence of Itzik. He walks the line of wanting to be like Itzik, joining him in snorting cocaine and drinking to excess, and being with Itzik, opening himself to the potential intimacy of his friend. It’s a moving portrayal of an older man coming of age, as Meir realizes he’s been hiding in a comfortable life for so long that he’s unsure of his identity and desires. There’s a tense moment between the two men, with Itzik admitting that he could never settle like Meir. It’s a chilling moment that pushes Meir to confront the limits of their friendship, testing how far he’ll go to prove he’s a changed man, and Gabay plays it with beautiful and haunted vulnerability.

Writer/direct Moshe Rosenthal crafts a wickedly fun journey in Karaoke. Tova, Meir, and Itzik are all pawns in each other’s games, and Rosenthal knows how to place them strategically opposite each other. Each character can bring out the best, and sometimes the worst in each other. Rosenthal also plays with their high rise complex, bringing in the sprawling yet claustrophobic atmosphere of their building. With each penthouse party, the inhabitants gaze up from their balconies, unable to escape the sounds from above. Itzik is gaining a notorious reputation amongst his neighbors. Are they really upset at the revelry in the penthouse, or are they jealous that they’re not invited? It’s a fun environment to play with, and Rosenthal really nails the politics of living in an apartment building.

Karaoke might sing a familiar tune of the weary married couple confronted with change. However, with the excellent performances of Askenazi, Shukrun, and Gabay, Karaoke finds its own spin on the same old song, offering some darkly comedic takes, all orchestrated by writer/director Moshe Rosenthal. 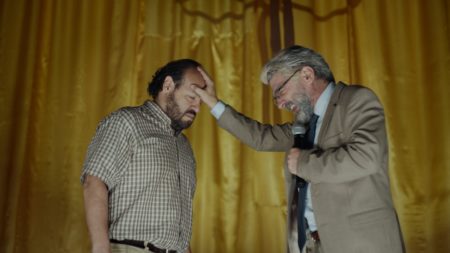 Tribeca 2022: The Visitor is a melancholic tale of redemption 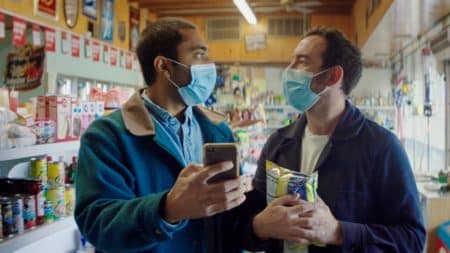 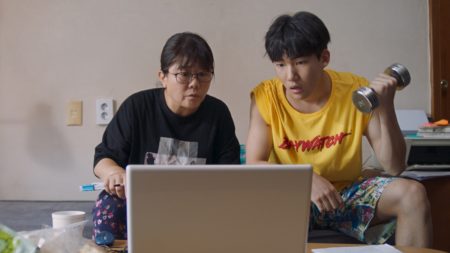