Black movies came thundering through Hollywood in the 1990s. Films like Boyz n the Hood and Menace II Society gave the world a glimpse into inner city African-American life. Meanwhile, movies like Waiting to Exhale and Soul Food gave audiences a window into the lives of professional black women. Despite this new wave of Black cinema, romance films with African-American casts had not yet made their appearance.

Love Jones and The Best Man broke the mold by showcasing the trials and tribulations of black love. However, when it came to putting the first inklings of love and sensuality on screen outside of dangerous environments, young black people —teens, in particular, had to look toward mainstream films like She’s All That or 10 Things I Hate About You for some sort of connection. Black characters may have been sprinkled throughout these films —but they certainly weren’t the central focus.

In 2000, Gina Prince-Bythewood shattered the standard for romance, black love, and sensuality in cinema with her acclaimed drama, Love & Basketball. Set in the early ’80s and moving into the ‘90s, Monica (Sanaa Lathan) and Quincy’s (Omar Epps) romance begins at age 11 when Monica and her family move next door to Quincy’s. Rambunctious and feisty pre-teens— the pair have an instant rivalry and mutual respect because of their shared love of basketball.

From the moment the film opens with Al Green’s “Love and Happiness” spinning in the distance, these kids speak the same language. As they step into their teen years, Monica and Quincy’s admiration for one another grows—as does something a bit more sensual that begins to burn under the surface. However, basketball, the politics of gender, and the perils of adulthood start to crack the foundation of their love and friendship.

The best romance films speak to our souls because our investment and the love we have for the characters tug at our hearts, and awakens some common connection we have in our own lives. Monica and Quincy’s story builds over four quarters (like a basketball game) instead of a meet-cute, confrontation, and resolution told over three acts. Instead, writer/director Prince-Bythewood takes the time to reveal the characters in all of their beauty, humanity, desires, and internal conflicts.

By the Second Quarter at age 18, both Quincy and Monica are formable basketball players with vastly different styles on the court. While Quincy seems to float across the hardwood flooring, Monica is vicious in her defense and offense. As she dribbles down the court, the audience is privy to her inner-dialogue, and her desperate desire to prove herself as one of the best players out there, regardless of gender.

Historically, women have never been allowed the full emotional capacity for sportsmanship.  As a result, Monica’s constantly attitude gets her in trouble during and further alienates her from her traditionally-minded mother, Camille (Alfre Woodard).

Quincy also has a lot to live up to. His father Zeke (Dennis Haysbert) is a pro-basketball player whom he idolizes. As Quincy matures — the facade that Zeke has built around himself as a father and a husband begins to unravel, threatening to break Quincy’s spirit and perception of self. Though Quincy is king of their high school and Monica stands on the outskirts—their mutual passion has kept them connected over the years. Through Prince-Bythewood’s lens, they are constantly orbiting around each other. At night, instead of listening to his parents fight, Quincy crawls out of his bedroom window and into Monica’s where she offers him a pillow, blanket, and space on her floor. His secrets remain safe with her. Also, it’s Quincy that Monica trusts when it comes to opening her recruitment letter from the University of Southern California (USC).

In the age of Barry Jenkins’ If Beale Street Could Talk, it seems stunning that sex and sensuality amongst black people was almost non-existent on screen up until the mid-’90s. Love & Basketball helped usher in a new era of black intimacy and desirability in film. For black women, regardless of socioeconomic background or religion –many of us been grounded in a tradition of silence when it comes to sex as a way to undermine stereotypes of hypersexuality. Black women have often been taught to suppress their sexuality, or we’ve been shamed into silence about physical needs and desires. It’s a mold that has slowly been chipped away in the last thirty years or so in popular culture.

In Love & Basketball, Prince-Bythewood presents sex as a celebratory act —a moment to be enjoyed. In Quincy’s arms —Monica is not merely desired, she’s also protected, and she never needs to be put on display. Sex scenes —especially when they are meant to capture a first-time encounter aren’t often given the care and consideration that should be expected of the experience. With Maxwell’s “This Woman’s Work” in the background Prince-Bythewood presents the beauty and candor of sex (with the visual use of a condom and verbal consent). Though we see Quincy’s reactions to Monica and her body — his appreciation, and reverence of her is evident —the experience is presented through her perspective. She isn’t an object to be ogled or placed on display. Instead, because the camera stays on her face, the audience  is privy to her emotional state and the romance of the encounter.

In addition to Quincy and Monica’s love story,  the women in Love & Basketball are the most interesting characters. Quincy’s mother, Nona (Debbi Morgan) is a force. Her pain and strength only become more magnified when she chooses herself instead of enduring more years locked in a broken marriage. Aside from her relationship with Quincy, Monica’s relationship with her mother is also central to unpacking who she is and how the film’s narrative unfolds.


Black women have often been taught to suppress their sexuality, or we’ve been shamed into silence about physical needs and desires.

Monica and Camille have been at war for a lifetime. A traditional housewife —Monica resents her mother for her apparent submissiveness. Meanwhile, Camille is loudly horrified with her daughter’s temper and tomboy persona. In every quarter of the film, they have some sort of confrontation that finally comes to a breaking point in the Fourth Quarter. Their mother/daughter relationship is a culmination of the respect and resentment of old school traditions in the modern world. The pair capture an authenticity that many black women will recognize in their own relationships with their mothers. In the end–it’s this relationship that will teach Monica the most about herself.

Love & Basketball wouldn’t be the gut-wrenching film that it is without a bit of conflict, and most of that comes to a head at in the Third Quarter —Monica and Quincy’s freshman year at USC. Years of friendship anchor their newfound love. Still, the complete break down of Quincy’s parents’ marriage, immaturity and Monica’s ambition throws a wrench in their relationship. Though Quincy admires Monica’s work ethic, when all is said and done —he forces her to choose between being his support system and her dreams. It’s a situation she would never have placed him in. It’s a choice that not only topples their romance, but erodes their near lifelong friendship.

In the Fourth Quarter —five years after their devastating breakup —Monica and Quincy cross paths once again. Brilliantly, Prince-Bythewood does not simply offer a chance for reconciliation. Instead, she presents an opportunity for them to decide who they truly are as individuals. Monica is living out a version of her life-long dream —playing professional women’s basketball in Spain. Yet, she’s never felt more alone. Quincy, on the other hand, has started to look in a different direction, realizing that his ties to basketball had more to with his connections to his father as opposed to his true passions. Instead of losing themselves in the game, as they did those many years before, Monica and Quincy confront their feelings for one another head on.

Love & Basketball is a love story that enchants us today, just as much as it did 19 years ago. Monica seeks both love and career without compromise, and she refuses to make herself smaller for the sake of her partner’s ego. From the day they meet on the basketball court at age 11, Monica shows Quincy who she is — and in the end, he is the one who must adjust his expectations of what women can and should be so that he can love Monica exactly the way she is. 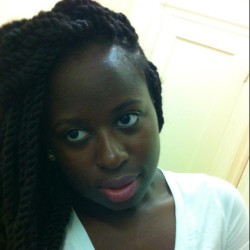 Latest posts by Aramide Tinubu (see all)
Liked it? Take a second to support The Spool on Patreon!