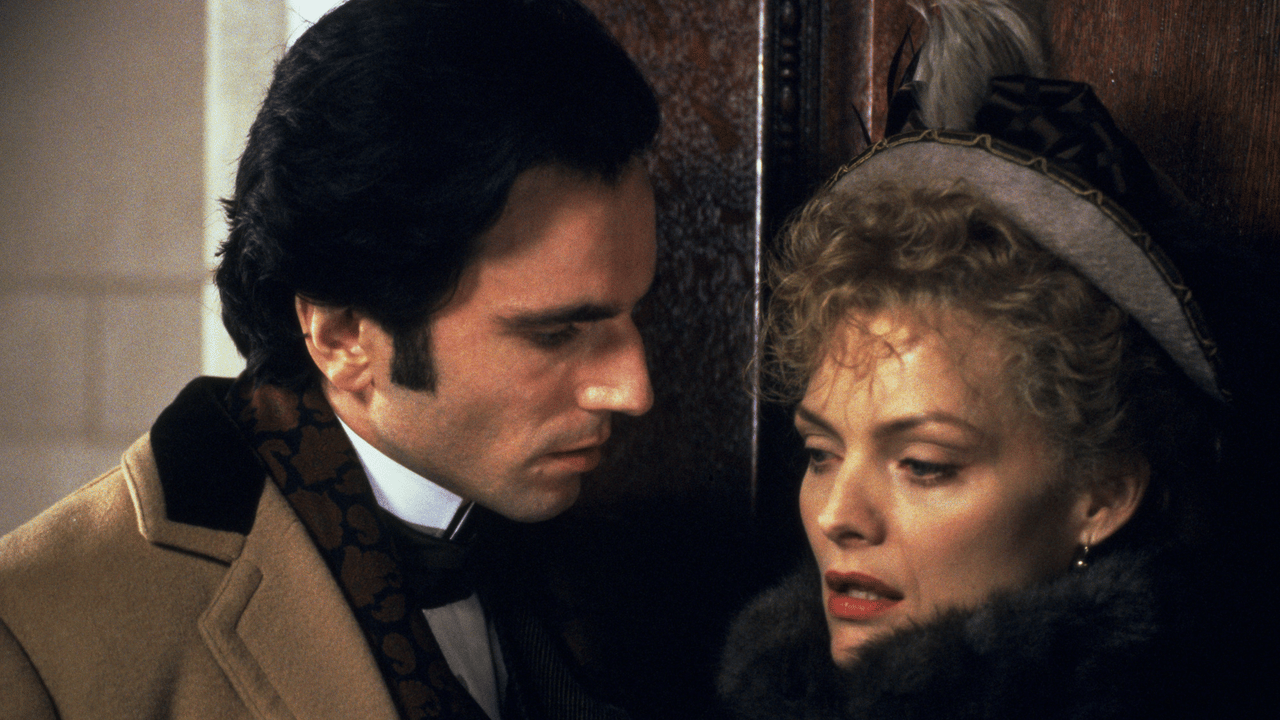 Martin Scorsese has made a lot of different kinds of movies. But his best-known ones are about bad people doing bad things. Being bad is fun because it feels really good, right? But its legacy is toxic — it leads to moral and spiritual ruin. That’s the cost.

But people aren’t born bad, or most people aren’t anyway. A lot of bad people start out wanting to be good and lose themselves slowly, piece by piece. Scorsese’s 1993 masterpiece The Age of Innocence (based on the Edith Wharton novel) is instead about the cost of being good –  two people fall in love with each other after seeing mutual decency in one another. And, because of that decency, they can never consummate that love.

Newland Archer (Daniel Day-Lewis) and Countess Ellen Olenska (Michelle Pfeiffer) are both members of the Manhattan upper crust in the mid-nineteenth century. Newland is a respectable lawyer, recently engaged to pretty young thing May Welland (Winona Ryder). When May’s scandalous cousin Ellen returns to New York from Europe after escaping a disastrous marriage, broad-minded Newland, who grew up with Ellen, actively rejects the judgmental, gossipy element of society that’s eager to look down on and shun Ellen for fleeing her relationship.

In Scorsese’s bad guy movies, the penalty for violating cultural customs is prison or death. In The Age of Innocence, going against the culture results in being socially blackballed, a fate almost as bad. Like in the mob, reputation is everything among socialites, and one wrong word can end a person as quickly as a bullet. Newland’s renewed friendship with Ellen lends her a bit of his credibility and ties their social fortunes together. It’s a risky thing to do, but it’s the right thing to do too, for himself and Ellen but also for May, whose family’s reputation is shaded by Ellen’s return.

Newland is simultaneously in society and apart from it. He’s an upstanding member of the community, taking care of his mother and sister and enjoying the perks of money and status, but he’s also troubled by the rigidity and hypocrisy of his social circle. It’s unjust that women like Ellen are treated like lepers for being mistreated by their husbands while men who are unfaithful are allowed free reign. Everyone gives Ellen side-eye for running away from her shitty husband but no one seems concerned that her husband was, in fact, super shitty. Newland seeks to correct that injustice, at least for Ellen.

Women in Ellen’s situation didn’t have a lot of options back then – she couldn’t just start her life over, get a job and a new set of friends. Without the association and financial support of Newland and a few of her family members, she’d be alone and more likely to return to her abusive husband. Newland isn’t being completely altruistic, he genuinely enjoys her company; she’s not as stuck up or shallow as the people he runs with, not as obsessed with doing everything the right way. The relationship that blossoms between them is ridiculously tame by modern standards, but in the world they inhabit it’s as potentially destructive as a bomb.

The Age of Innocence … [is] about the cost of being good.

Life in The Age of Innocence is very contained, very organized, and very public. Everyone is in everyone’s business and everyone spends all their time looking at, talking about, and judging everyone else. Even the whisper of impropriety between Newland and Ellen is potentially disastrous, not just to themselves but to the people they care about. Newland’s mother and sister would be ruined, as would the elements of Ellen’s family who supported her when she returned to New York, including, obviously, May.

If Newland ran off with Ellen it would only prove that all the scolds who believe society’s rigid structure is necessary and that Ellen is sexually dangerous are correct; plus, he still cares for May and has no wish to harm her. Similarly, it’s the devotion to family and morality that Ellen loves so much about Newland. He took a risk when he publicly backed her return to New York, and he is a good family man who also cares very much for her cousin. Her marriage collapsed because of infidelity; if she gave herself to Newland she would be no better than the woman everyone said she was and he would be just like her scumbag husband.

To consummate their desire would tarnish the good they see in each other. But, because the passion is strong, they walk up to the brink of true impropriety. Being good is hard; it’s work. It doesn’t promise the rush that accompanies the immediate gratification of being bad, or the woozy drunk pleasure of being in love.

When May announces that she’s pregnant, Newland and Ellen break permanently, and in so doing deny themselves their hearts’ desires. Newland stays with May and Ellen is able to achieve some financial independence and leave New York for that elusive new life. They stay good but they lose each other. The story leaps ahead decades and we find that Newland has a satisfactory life after his marriage, he has loving children and maintains his position in the culture. Ellen’s future is less clearly explained but there’s no indication that she’s unhappy.

Was it worth it? When contrasted with the carnage and ruin that so often closes all those other Scorsese movies, it’s hard to argue that it wasn’t. But that’s not exactly the same as peace. Newland never exactly gets over Ellen either; he lives with the shadows of his own compromises and regrets. No one gets out of this life clean.

The Age of Innocence Trailer: