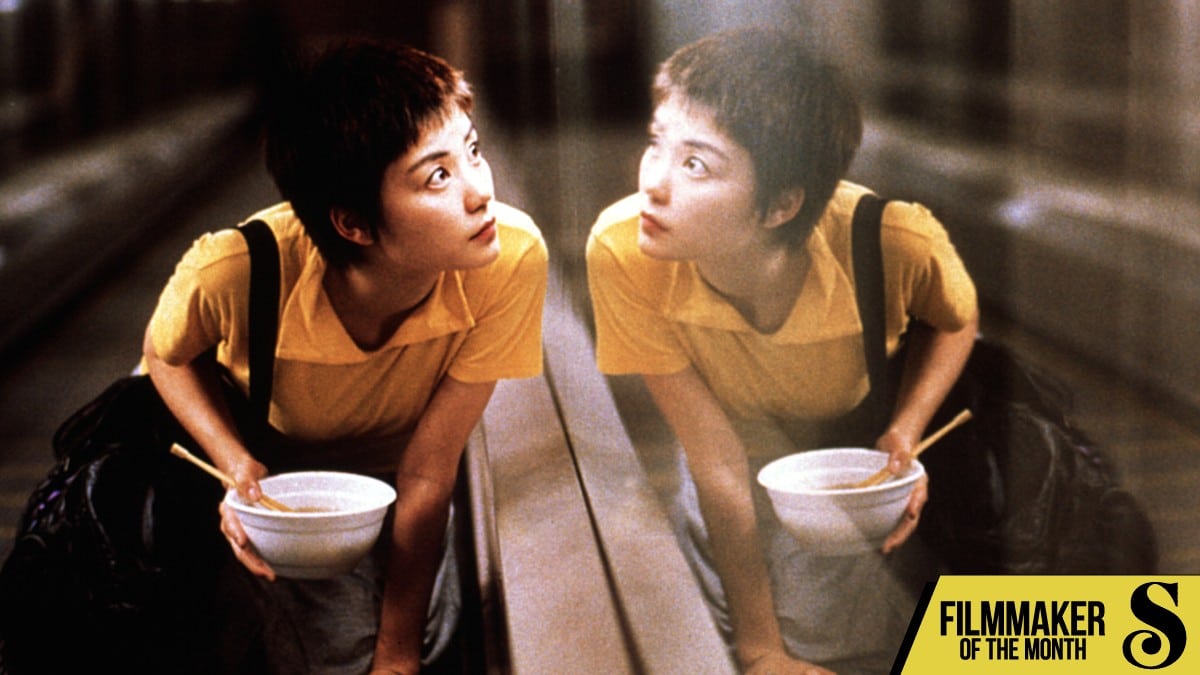 Every month, we at The Spool select a filmmaker to explore in greater depth — their themes, their deeper concerns, how their works chart the history of cinema, and the filmmaker’s own biography. This March, we revisit the sumptuous, romantic, deeply humanistic works of Hong Kong’s favored son, Wong Kar-wai. Read the rest of our coverage here.

“Everything expires. Is there anything in this world that doesn’t?”

In the world of Wong Kar-wai‘s Chungking Express, people, and the relationships between them, are defined by the objects they buy. A heartbroken cop (Takeshi Kaneshiro) purchases a can of pineapples from his local convenience store for 30 days, each one with an expiration date of May 1st — both evocative of his recently-departed girlfriend (also named May) and of the month she tells him she needs to think their relationship over. A curious food stand worker (Faye Wong) sneaks into the messy apartment of another cop (Tony Leung Chiu-Wai) just to learn more about him, and clean up his belongings. Items become totemic, indicative of the passage of time and our connections to each other.

Time is absolutely on Wong’s mind in every stage of Chungking, from his understanding of chronology to the liminal states of his characters. The context of the film’s creation is also unique in its timing: Wong made Chungking on a two-month break from the years-long editing process of his sprawling wuxia epic Ashes of Time, out of a need to break out of that mode and try something new in the form of a two-chapter set of love stories set in the modern day. (A third planned story would be scrapped from Chungking and turned into future feature Fallen Angels.)

The results, of course, were revelatory, not just for Wong’s status as an auteur filmmaker but for the world of independent global cinema: Chungking Express was a huge success, at least critically, and established Wong Kar-wai as a known quantity among Western cinephiles.

Unlike the languid slowness of Ashes, Chungking is sprightly and fast-paced, its understanding of time as malleable as its step-printed chase sequences that begin the film. The film’s two distinct narratives — both of cops dealing with fractured love and the anxiety of its distance — take place, respectively, in Chungking Mansions (a crowded, working-poor area punctuated by flophouses and shady dealings) and the Midnight Express (the food stand where Wong sways to “California Dreamin'” ad nauseam while selling chef’s salads). They’re liminal spaces, waystations from one place to another; everyone feels like they’re just there on their way to the next thing, and those that stay shouldn’t be there much longer.

Alienation and decay are littered throughout Chungking Express, and the only characters we really follow feel like ships in the night, figures looking for love but unable to put away their pretenses. Take the first story, for instance, the love-sick cop with the canned pineapple fetish — his narrative chiefly revolves around his dalliance with a mysterious drug dealer with a blonde wig (Brigitte Lin Ching-hsia, serving Gena Rowlands on a silver platter), which never goes further than the cop intimately polishing her shoes while she sleeps one night. Wong knows their interactions can’t last — like the expiring can of pineapple, Lin’s own time is running out, as the drug couriers she’s recently betrayed will soon come to kill her (her own countdown comes from a similarly-expiring can of sardines being handed off to her). And yet, their encounter helps to teach Kaneshiro’s cop to let go and look for love elsewhere.

Leung and Wong’s romance, meanwhile, is more endearingly hazy — both Leung’s cop no. 663 and Faye strike up a curious courtship, much of it unrequited on her part. But in classic Wong fashion, rather than be straight and ask him out on a date, Faye takes the rare chance of being handed his keys by an ex-girlfriend to sneak into his apartment while he’s working and hang out there. These are some of Chungking‘s most iconic scenes, Faye bobbing her head to “Dreamin'” as she cleans up his place, plays with the toy airplane 663’s flight attendant ex gave him, and simply soaks in the margins of his life. She gets to know him through his stuff: commodity fetishism in perhaps its most literal form.

This attachment to objects isn’t limited to Faye, either. Frequently in voiceover, no. 663 muses on the changed state of his apartment when he returns from work, assigning human emotions and thoughts to the things around him. He talks to his soap and his towels. Upon returning to see his apartment soaked (Faye accidentally soaked it), he thinks, “When a person cries, you just hand them a tissue. But when an apartment cries, it’s a lot of work to mop up.” He refers to a wet towel as “a very emotional towel.” For the lonely characters of Chungking Express, the things around them are their only real chance at a real connection.

Like Breathless or Masculin feminin before it, Chungking feels deeply inspired by Jean-Luc Godard’s own freewheeling celebrations of youth culture — music-obsessed youngsters who fall in love and float through the world like it’ll never end. In addition to the anthemic use of the Mamas and the Papas, we’re also gifted with Dinah Washington’s velvety rendition of “What a Difference a Day Makes”, as well as a Cantonese cover of The Cranberries’ “Dream” (delivered by Wong herself), among other signifiers of the West’s pop culture influence on Hong Kong. Of course, Chungking comes a few mere years before the handoff of Hong Kong from Britain to China, portending an end to the kind of materials-based freedom that association with the West afforded them up to that point. It’s hard not to read the film, then, as a last-ditch celebration of these freedoms before Hong Kong’s own expiration date runs out.

But independent of these material anxieties and the cultural context of its release, Chungking Express functions magically as a modern love story divorced from time and space. DPs Christopher Doyle and Andrew Lau twirl and whirl the camera around our heroes, dipping and diving along with their dancelike movements, bathed in the sickly, fluorescent greens and blues of urban life. There’s a fly-on-the-wall feeling of verite to the whole affair, until Wong sets us up for a striking, static composition like Leung’s first walk up to the camera, his dreamy eyes staring down the barrel of the camera. The rest of the world feels out of focus, immaterial but for its ability to draw the two figures of Wong’s eye together. Sometimes, that’s them sharing the same space; other times, it’s them relating to the other through die-cast planes and tins of canned fruit. In their hands, these items hold power — the power to connect with each other, even if they’re miles apart.

That’s the magic of Chungking Express: not just to capture Wong’s hallucinogenic, incontrivertibly artful style as a filmmaker, but to capture the power we ascribe to objects as placeholders for human connection.