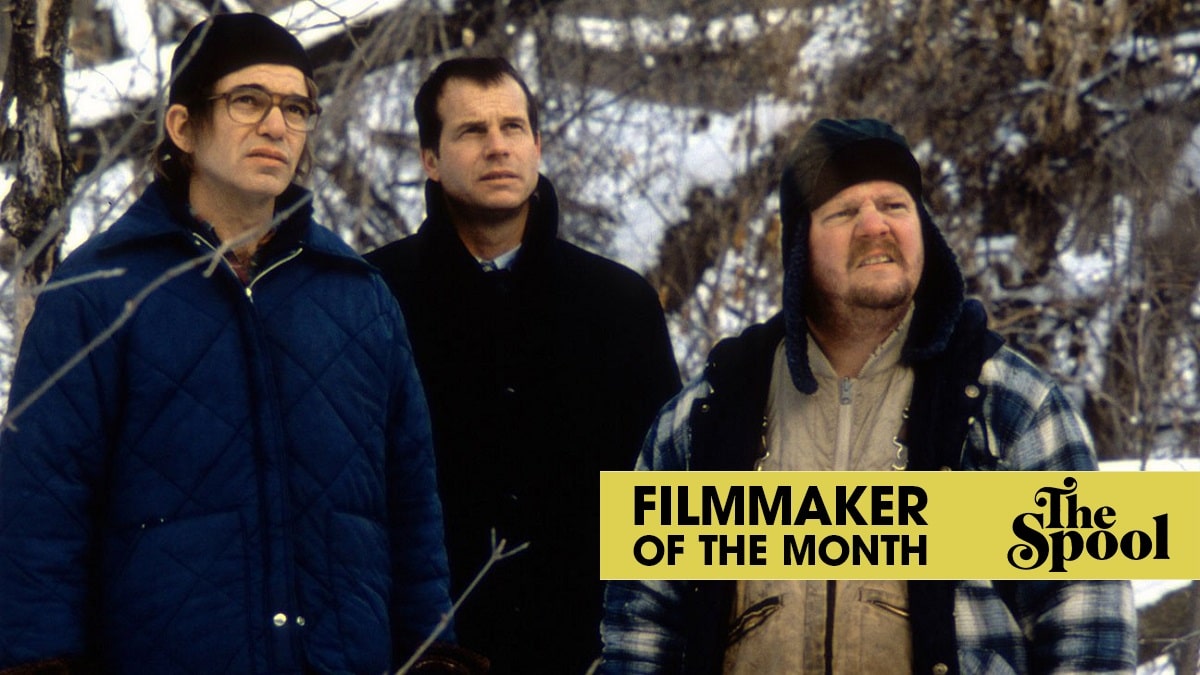 There’s never a happy ending in a movie when a character finds a bag of money. It always ends in violence and heartbreak, with our protagonists corrupted, no matter how pure they may have started out. A Simple Plan is the best of these movies and the best of the short-lived trend of crime movies in snowy locales post-Fargo.

Bill Paxton, in the finest performance of his career, plays Hank. He’s got a dutiful wife Sarah (Bridget Fonda) and a baby on the way, as well as a steady, if menial, job at the town feed store. His older brother Jacob (Billy Bob Thornton) is a perpetual screw-up: often drunk, chronically unemployed and a virgin. He’s frankly one of the most pathetic characters in cinema history. And like The Sopranos’ Paulie Walnuts, he has an annoying habit of repeating the punchline of a joke someone else just told, hoping to wring out whatever laughs might still be out there.

While going to visit their parents’ grave, the brothers – along with Jacob’s drinking buddy Lou (the late Brent Briscoe) – discover a crashed plane. Inside, they find a duffel bag with $4.4 million. Even a fraction of that could be life-changing to any one of them. Immediately, Hank registers that keeping it is a bad idea. Part of this is self-preservation: Someone always comes looking for a load of cash that size. Part of this is Hank’s do-gooder, Boy Scout nature. And part of it is his arrogance and superiority – which will repeatedly come back to haunt him. He thinks he doesn’t need this money and claims he would rather earn his living than come by it dishonestly.

Still, it’s fascinating how quickly Hank turns into a secretive, even manipulative conspirator in this theft. He doesn’t tell the town sheriff (Chelcie Ross), chiding Jacob for nearly blowing their cover. He instructs Lou to keep it from his wife Nancy (Becky Ann Baker), yet immediately rushes home to tell Sarah, who soon transforms from an angelic mother into Lady Macbeth.

It’s not surprising to us as viewers that things go bad, but they go bad so quickly. Every step a character takes to correct a mistake only makes things worse. Yet there’s not a single false note or wasted moment in the film’s two-hour runtime. Every time I see A Simple Plan, I keep hoping they won’t ruin each other’s lives with greed and chicanery because none of them start out as bad people. But like all of these stories, it can only turn out one way.

A Simple Plan had been in the works since before Scott Smith’s novel was even published, with directors like Mike Nichols and John Dahl (who certainly knew his way around gritty crime dramas) involved before John Boorman (Deliverance) was hired. He left to shoot the Irish gangster film The General instead. That left Sam Raimi to accept the job last-minute, but what a coup that turned out to be.

Coming off The Quick and the Dead, an entertaining and hyper-violent Western that marked the genre’s death knell, the movie had little of the gore or dark humor Raimi was known for. Indeed, the movie is an outlier in his filmography. (The only one further outside his wheelhouse was his follow-up, the romantic sports drama For Love of the Game.)

It’s not surprising to us as viewers that things go bad, but they go bad so quickly.

Yet this is among his most intense films, with every scene a masterclass in building tension. In Alfred Hitchcock’s Psycho, it’s shocking how quickly we root for Norman Bates to cover up his crimes. We’re on the edge of our seats as we wait for Marion Crane’s car to sink into the lake. Again and again in A Simple Plan, we’re anxious for Hank and Jacob to get their stories straight after one murder begets more, hoping they can avoid suspicion for just a little while longer.

The only scene in here that feels like the films that made Raimi’s name is the extended sequence at Lou’s house. Sarah suggests Hank and Jacob get Lou drunk enough to “confess” to a murder the brothers committed. Lou and Jacob, who both feel Hank can be smug and highfalutin, revel in taking turns mocking him. The plan nearly works, but Hank’s cockiness proves deadly, as he immediately plays back the taped “confession” for Lou, prompting a bloody gun battle that absolutely shatters what’s left of Jacob’s motivation for living.

What had been keeping Jacob going up until this point is not the money. He really never had any, and to him, hatching schemes with Hank is the same as bonding. He’s getting to reconnect with the brother who always looked down on him, who has all the things he wishes he has. The money is a gateway to happiness, or so he thinks. His dream is not a mansion with a fully loaded truck in the driveway. He wants to buy back the family farm, even though he knows nothing about agriculture. He wants the fantasy of normalcy. The bank had long ago repossessed the house they grew up in, though whether it was through their dad’s bad business dealings or his desire to send Hank to college is left unresolved. The dilapidated barn and rusted tractor represent the bleak ending for their parents, one that Jacob seems destined to repeat.

That desire for normalcy is understandable. In one of the film’s most heartbreaking scenes, Jacob reveals that he’s never even kissed a girl. Hank tries to give him an attaboy, reminding him of a past girlfriend. Jacob confesses it was part of a sick bet that her friends made: $50 to go out with him for a month. Even if that relationship had been real, Hank’s referencing a brief moment of happiness that’s close to 20 years in the rearview.

But appearing normal is what proves to be the brothers’ undoing. Late in the film, Neil Baxter (Gary Cole) arrives, claiming to be an FBI agent searching for the downed plane. Because the townspeople are so trusting, and Neil looks so, well, normal, his sinister intentions only catch the attention of the person who’s furthest removed from the action: Sarah. That makes the last 20 minutes of the film riveting and absolutely devastating.

A Simple Plan will remain timeless as long as the world keeps buying into the lies of capitalism: that hard work will get you everything you need, and that more money will make you happier. Everything that was true about the film more than 20 years ago is true today, and will sadly be true for decades to come.