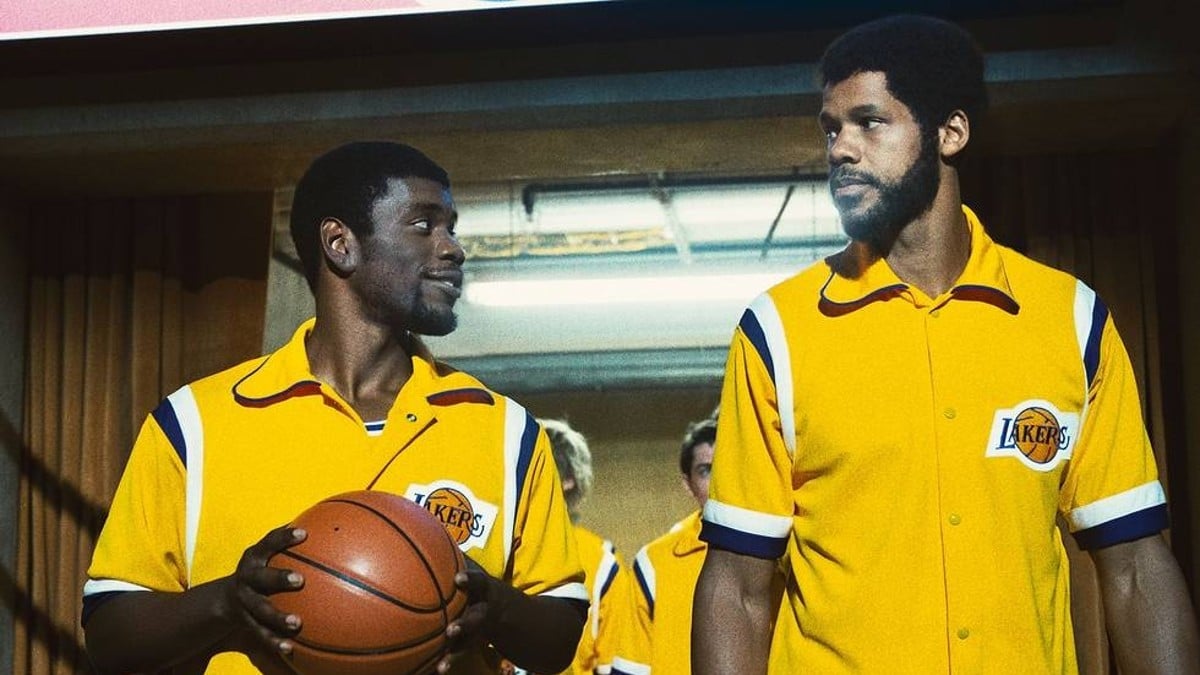 We don’t step foot on an NBA court until the final minutes of the first episode of HBO’s new docu-series, Winning Time: The Rise of the Lakers Dynasty. This isn’t an accident; it’s a show with more on its mind than the x’s and o’s of a regular-season game. It’s not a series about the game of basketball but about the business of basketball – specifically, the moment the NBA goes from a poorly attended, barely-regarded sports league to the global entertainment juggernaut it is today.

It all comes down to a coin flip in a smoky office to determine the number one pick in the 1979 draft. Adam McKay, who directs the first episode, leaves this historic coin in the air for several moments to show its importance. We never see the coin land, but we know the ground has shifted. The winner of this fateful coin toss is the fledgling Los Angeles Lakers, now owned by a doctor in chemistry and frequent Playboy Mansion guest, Jerry Buss (John C. Reilly)

He doesn’t know anything about the actual mechanics of the game, but he knows how to build things. He has his eyes set on picking Earvin “Magic” Johnson (newcomer Quincy Isaiah), an electrifying point guard who’s too tall for his position but fresh off a National Championship at Michigan State. The rest of the organization is skeptical of the 19-year-old, including head coach and former Lakers great Jerry West (Jason Clarke). Buss ignores the doubters and, like everything else in his very privileged life, gets what he wants.

If there’s one thing that McKay wants to teach us with his recent, post-Big Short output, it’s that the world is run by rich assholes. This show, like the McKay-produced Succession, has a great ensemble of them, from Michael O’Keefe as Jack Cooke, the racist and uptight former owner of the Lakers to the great Michael Chiklis chomping on cigars and whatever scene he’s in as the revered Celtics coach, Red Auerbach. But only an actor as likable as Reilly can make such a philandering, narcissistic individual like Jerry Buss redeemable.

Reilly plays Buss like a used car salesman whose overwhelming charm and confidence persuade you to pay full price for a car you know is going to explode the moment it leaves the lot. That skill comes in handy in scenes like when he convinces his ex-wife to give him a hefty loan in order to finalize the $67 million deal to buy the Lakers. Buss, who passed away in 2013, knew how to buy low and sell high. The franchise is now worth $5.5 billion.

The rest of the cast also imbues their real-life counterparts with dimensions that make them into flesh and blood people instead of one-note characters doing an impression of a public persona. Jason Clarke does great work here as Jerry West, a man so bitter about his career and its lack of championships that he wallows in his underwear as a victim, even though he’s in the Hall of Fame and the literal logo for the league.

Only an actor as likable as Reilly can make such a philandering, narcissistic individual like Jerry Buss redeemable.

The second episode, directed by Jonah Hill, peeks behind West’s curtain with a flashback to his difficult childhood in West Virginia. It doesn’t excuse his behavior, but when West has a breakdown and throws his NBA Finals MVP trophy through a window, you get it.

Quincy Isaiah has the highest degree of difficulty here. He’s playing one of the most recognized and celebrated athletes of the past 40 years while also giving a nuanced performance about a kid who goes from humble surroundings in Lansing, Michigan to being the most famous athlete in the entertainment capital of the world. Isaiah doesn’t match the physicality of the real-life Magic, but he does nail the most important part- a smile with enough wattage to power the Eastern Seaboard.

The series begins in 1991 in the doctor’s office where Magic finds out he’s contracted H.I.V. We all know this happened but starting here before cutting back to the carefree (and very sexually active) Johnson of the ’70s gives the show immediate dramatic tension and hangs a darkness over the bright lights of the “Showtime Lakers”.

The show also recreates the ‘70s and ’80s NBA era with a hyper-stylized look that matches the technology used to shoot the games at the time. They mix together 16mm and 35mm film stock before dirtying up the negative to give it a Kodachrome feel.

It’s an ingenious use of cinematography that takes the intensity from the court to the real action off the court (and a clever way to avoid paying for actual NBA footage) but the constant mixing of film stocks and quick cuts can also get in the way of the narrative. There’s one scene about a business meeting taking place on a golf course that’s so overly edited it’s like Oliver Stone had taken over the control room of the 1980 Masters.

The first episode also starts in full Big Short mode with Reilly breaking the fourth wall and speaking directly to the camera as he navigates through piles of naked people at the Playboy Mansion. Like The Big Short, it can become a narrative crutch to hand feed the audience context without the effort to show it, but the show dials it down as it progresses.

It’s still a fun way for characters to share more back story and exposition while giving us insights into their thinking, like the scene where Buss tries to desperately close the Lakers deal with Jack Cooke. Reilly turns to the camera and instructs us to “Watch [him] paddle, motherfuckers.”

The show captures the spirit of a Wild West era for basketball, before it transformed into a legit business enterprise.

I have no idea how historically accurate Winning Time is, and I truly don’t care. Like the performances and the old school visuals, the show captures the spirit of a Wild West era for basketball, before it transformed into a legit business enterprise. It was a turning point not just for professional basketball or professional sports, but for capitalism.

The mad genius of Dr. Jerry Buss is how he combines the spectacle of big arena sports with athletes like Magic Johnson (who have the magnetism of Hollywood celebrities) to build a world-devouring empire worth billions. Getting a few championships along the way doesn’t hurt either.

Winning Time: The Rise of the Lakers Dynasty Trailer: