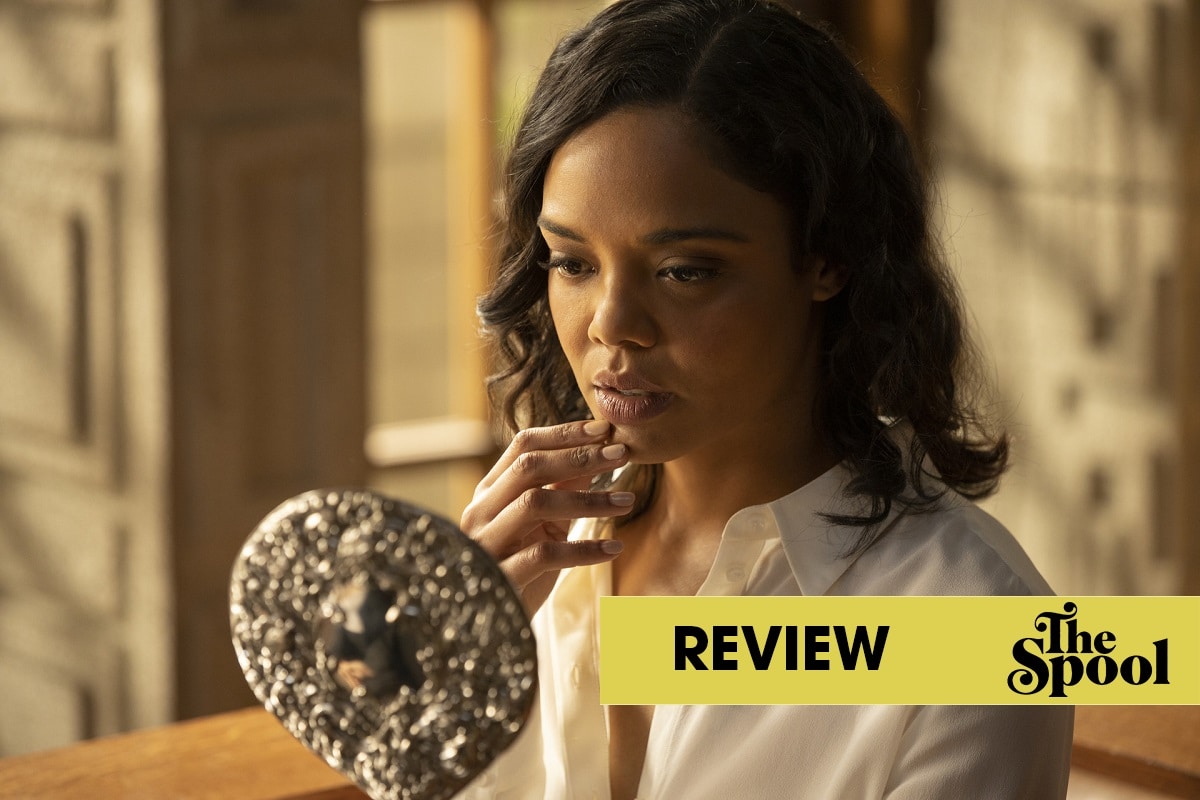 Both Charlotte and Caleb wrestle with identity crises, and the show spins its wheels.

“Have you ever questioned the nature of your reality?” has been Westworld‘s mantra since its inception. As season 3 veers further away from the parks and its Michael Crichton origins, Jonathan Nolan and Lisa Joy‘s show feels more and more like Nolan’s previous series Person of Interest with each passing minute, moving past robot personhood and all the way into the ways overarching systems control us by understanding us better than we understand ourselves. Episode three of this third season, “The Absence of Line,” is maybe the most unsubtle, direct exploration of that credo yet, though it stumbles a little under the show’s own heavy-handed weight.

Who is Charlotte Hale (Tessa Thompson) now, anyway? That’s the major question this episode concerns itself with, as we revisit the end of season 2, and host-Charlotte’s conversation with Dolores (Evan Rachel Wood) about why she’s alive and why Dolores needs her. From this, we get the implication that another host is inside Charlotte’s body, that an existing character’s pearl has been placed inside this new body for the purposes of controlling Delos from the inside. “You and I are the mother and the father,” says Dolores; “without Delos, there will never be any more of our kind.”

And so she’s sent off to masquerade as the real Charlotte — to play mother to her son Nathan and exchange tense words with Charlotte’s ex-husband (Michael Ealy). What’s more, her phone contains a number of cryptic, static-y audio files she can’t quite decipher. And not only that, there’s a mole inside Delos, someone doing some corporate espionage while a mysterious rival (whom we quickly discover is Vincent Cassel‘s French businessman Serac) is rapidly planning a hostile buyout of Delos.

But who is Charlotte really? And what is she up to? Is she merely a host version of Charlotte, her personality replicated using the Delos data-mining algorithms the park was designed to use? Or is she something else altogether? After all, something inside Charlotte is rebelling against the host consciousness, cutting her skin in strange, needle-like patterns. “I feel like I’m changing,” she admits to Dolores after asking for help. Thompson’s an incredible performer, but the show hasn’t asked her to do all that much so far. At least here, she gets a proper showcase, masking all that vulnerability and cunning into steely-eyed resolve.

It’s too bad, then, that Westworld‘s scripts remain frustratingly opaque. I get that the mystery and mystique is part of it, but at a certain point it gives way to sheer myopia. Take the scene where Charlotte confronts a sexual predator who apparently sits outside the Delos offices with a dog (which Nathan loves to pet) and a device that shuts off all the security cameras in that area. Convoluted? Yes. Contrived? Sure. But it’s a nifty release valve for Charlotte, who gets to strangle Thomas (and steal his adorable pupper) in a bid to match the real Charlotte’s killer instinct. “I remember what it’s like to be me.”

Therein lies the real trouble with Westworld‘s labyrinthine plotting: while at least we don’t have to deal with elliptical, dueling timelines anymore, the answers we get only seem to raise more questions. The pacing doesn’t help, Charlotte’s A-plot taking forever to get us 90% of the way to fairly straightforward conclusions, with little insight as to why we should care, despite Thompson’s committed performance.

The reveal that the soundfiles are, when played together, a musical passkey to reach Serac for a meeting (a reference to the real Charlotte singing “You Are My Sunshine” to Nathan in a moment of video-log vulnerability during the massacre that opened season 2) is cute, but one can’t help but feel like it’s a repetition of the end of season 2. I can’t wait for Serac to do more than just fling veiled threats at a beautiful robot woman in a beautiful courtyard.

But in more straightforward, engrossing news, series newcomer Caleb (Aaron Paul) is slowly but surely being dragged into Dolores’ revolution. Paul’s got fantastic John Wick energy here, all gritted teeth and action-hero resolve, but with the vulnerability needed to pull him back from cliche. This episode essentially sees him recruited by Dolores to be her new right-hand man (shades of Teddy), but his journey also offers some of the most potent, cogent thematic material of the season.

You see, we obviously root for the robots in this show about robots revolting against evil corporate humans — we’ve spent two seasons seeing just how the hosts are abused and manipulated by their human masters. But Caleb doesn’t belong to that system: he’s just as enslaved to capitalist interests as Dolores is. “It’s not about who you are, Caleb,” Dolores notes, standing on the same pier that the predictive algorithms of Rohoboam say he’ll kill himself in ten years’ time. “It’s about who they’ll let you become.” “You are the first real thing that has happened to me in a long time,” he confesses. As Dolores reminds him/tells us, his life’s been traumatic ever since his mother abandoned him at a diner when he was six years old. And his shadowy military past has just been one long extension of that trauma.

In the world of Westworld, the real barriers aren’t between robot and human, but between the haves and have-nots. The revolution Dolores wishes to spark would free the poor and the disenfranchised just as much as it would the artificial. While forces like Maeve and Bernard are already being positioned to stop her, it’s hard not to see the merit in Dolores’ quest. We’ll just have to see how much it evolves.