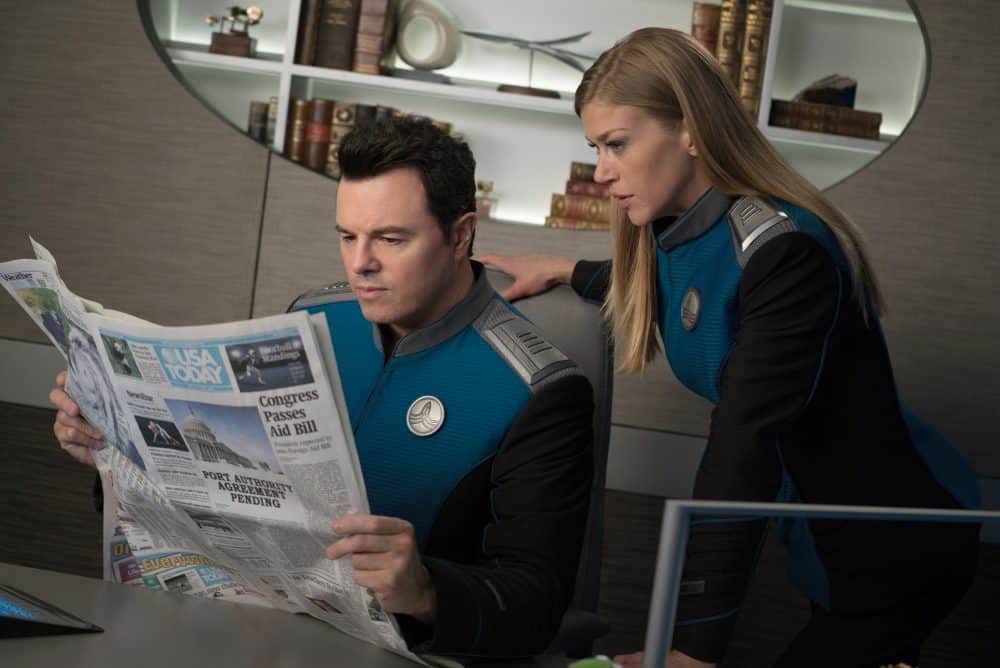 Gordon falls in love with a simulation of a 21st-century woman in another gentle, domestic filler episode.

What do our cell phones say about us? And I don’t mean that in a Black Mirror, reliance-on-technology-will-cost-us-our-humanity kind of way – what kind of image of us will we leave behind in our text messages, Instagrams, tweets? If a stranger from the future came across our cell phone years after we were gone, what would they think of our lives based on how we recorded it on our phones?

That’s the premise of “Lasting Impressions”, the second Orville in as many episodes to finally put the spotlight on the ship’s resident goofball, Gordon Malloy (Scott Grimes) after “Blood of Patriots”. They’re both episodes that test the big, lunkheaded heart of ace pilot, but in different ways – while the last episode pushed him into some real wartime conflicts with life-or-death consequences (and was the better episode for it), “Lasting Impressions” simply tempts him with the prospect of an unattainable romance with a simulation.

That simulation comes in the form of Laura Huggins (Leighton Meester), the owner of a 21st-century iPhone recovered from an old time capsule unearthed by archaeologist Dr. Sherman (Star Trek alum Tim Russ). Using a little futuristic engineering, Gordon and Lamarr (J Lee) get the phone working again, and Gordon is instantly smitten with the videos, messages correspondence left by the phone’s attractive owner – who left the phone in the capsule in the hopes that people in the future would see what her life was like based on her calls, texts and videos. In a fit of impulsivity, Gordon has the computer port all of the phone’s data on Laura into an accurate simulation of her and her life on Earth in 2015, striking up that quickly grows into a budding relationship.

Considering the show’s pedigree, it’s not hard to tie “Lasting Impressions” to the episodes of The Next Generation where Geordi LaForge found himself falling in love with a holodeck simulation of the Enterprise‘s original designer. It was creepy then, and the idea’s deeply creepy now – Gordon’s instant infatuation with her isn’t the best look, nor is his insistence that they start a relationship (and the, um, edits that he makes to her program along the way to clear a spot for him to enter her love life). To Seth MacFarlane‘s credit (he wrote the episode), he seems aware of the sketchiness of this dynamic – the second half of the episode sees his Captain Mercer (MacFarlane) and crew confront Gordon over the unhealthy nature of his simulated relationship with Laura (“You can bang a Krill, but I can’t date a sales rep at Macy’s?” Gordon throws pettily in Ed’s face).


It doesn’t necessarily help that Laura as a character falls short of the kind of realistic flaws and foibles that would make a real human being.

Even so, the larger conceptual questions raised by the episode don’t hold a great deal of water. In his defense of his relationship, Gordon name-checks Isaac, a robot everyone still treats as one of the crew despite being as artificially created as Laura. (Sidenote: we haven’t seen much of Isaac since his people tried to exterminate the human race; one would think it would take some time for the crew to reacclimate to him, especially given his temporary treachery.) It’s a terrible argument, though, and not for the reasons the crew claims: unlike Isaac, Laura already existed – these are the simulator’s recreation of the memories and media of a centuries-old dead woman. For Gordon to date her, even as a simulation, feels like necrophilia of a sort.

It doesn’t necessarily help that Laura as a character falls short of the kind of realistic flaws and foibles that would make a real human being. Her scenes with Gordon in the simulator – exchanging small talk at a house party, listening to her sing and play at a bar (a scene which basically doubles as a Leighton Meester music video, below), and more – are hardly scintillating stuff, as easy as Grimes and Meester’s chemistry can be. Perhaps that’s the point; the most normal guy on a futuristic spaceship would naturally crave the comfort of a mundane relationship like that. But The Orville has explored these kinds of low-key romances before, and there just isn’t enough beyond Laura’s unknowingly simulated nature to make these scenes more interesting.

Still, as Gordon and Laura’s ‘romance’ becomes more complicated, MacFarlane manages to wring out some more moments of intimate reflection and bonding among the crew, which is where The Orville typically excels. When Gordon makes the unforgivably selfish error of deleting Laura’s on-again, off-again boyfriend Greg (Darri Ingolfsson) so he can move in, he comes to realize the impact that relationship had on her – without him, she wouldn’t chase her dream of becoming a singer.

It’s a sentiment echoed by Kelly (Adrianne Palicki); without her failed marriage to Ed, they wouldn’t have chased their dreams of commanding a starship, and none of them would be on The Orville. “Every single one of us is shaped by the totality of our relationships,” says Kelly, for good or ill; we wouldn’t be the people we are without them. It’s a refreshingly human moment, one which makes the episode retroactively more intriguing.

Ironically given its title, “Lasting Impressions” doesn’t really leave many on the viewer. It’s a wonderful showcase for Grimes, to be sure, and a testament to The Orville‘s commitment to spending most of its time telling smaller, more intimate stories about its cast of likable characters. But its more interesting discussions about personhood, the pitfalls of unrequited love, and the value of our life experiences are pushed aside in favor of a trite contemporary romantic drama that suffers in comparison to the show’s more intriguing hours.