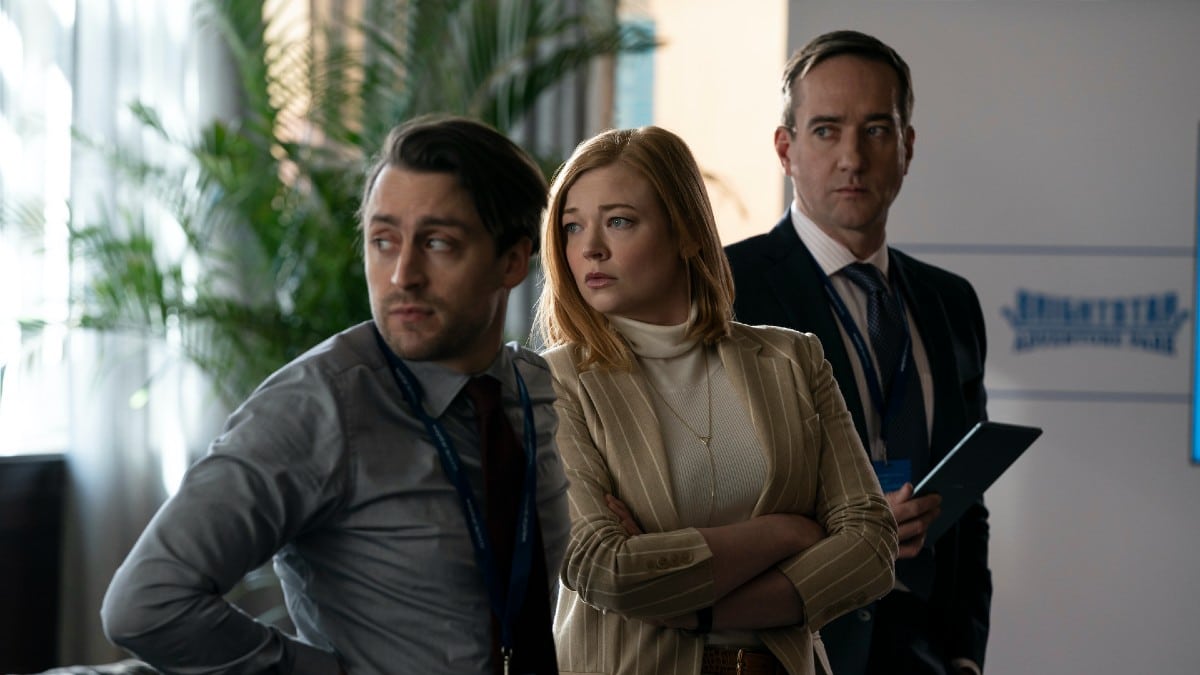 Last week’s episode of Succession was a slow burn, the tides turning as investor Josh Aaronson (Adrien Brody) pulled his money out of Waystar Royco. This week’s episode is a full-blown farce, as the Roys battle it out behind the scenes of Waystar Royco’s Annual Shareholder Meeting. They hope to present a unified front while attempting to secure a deal with Stewy (Arian Moayed) and Sandy (Larry Pine), curry favor with the President and keep Kendall (Jeremy Strong) out of the picture. Complicating matters is Logan (Brian Cox), madder than usual, barking nonsensical orders as his soldiers carry on.

The Roys and company gather at a Midtown hotel conference room. It’s time for the meeting, and all hands are on deck to prevent the Roys from losing control of the company. Gerri (J. Smith-Cameron) and Karl (David Rasche) have been trying to solidify a deal with Stewy and Sandy, but they keep getting sidelined with demands like board seats, veto power over a Roy CEO, and outrageously asking the family to give up their private jets, or “PJs.” There’s debate if it’s just a test. Roman (Kieran Culkin) thinks if they accept, it will be a way to humiliate Logan. Shiv (Sarah Snook) thinks they should just eat the jets.

Over on Kendall’s side, he’s hunkered down in a smaller suite, watching the drama unfold and letting Greg (Nicholaus Braun) know that he may have to “burn him” to win control of the company. Greg’s not too thrilled about being burned, but he always has good old grumpy gramps Ewan (James Cromwell) to help bail him out. But then Ewan informs him that rejecting counsel from Roger Pugh (Peter Riegert) and siding with Logan means he’s kicked out of the will. Ewan’s giving all his money to Greenpeace. Greg wonders if he can lovingly sue his grandfather; ultimately, he opts to sue Greenpeace.

Back with the Waystar team, the deal’s fine print is being negotiated. Undecided, Logan abruptly “has to piss,” so it’s up to Frank (Peter Friedman) to stall the shareholder vote. They’ve left him up at the podium to pontificate, rambling on about the company’s bright future. There’s back and forth between Shiv (Sarah Snook) and Sandi (Hope Davis), the daughters of business titans turned negotiators. They won’t back down on the private jets, and Logan returns to the bathroom to give the order to tell Stewy and Sandi to “fuck off.” They decide to go for a vote, trusting Logan’s gut. It’s carried him through before, so why would today be any different?

Logan’s extra cantankerous, and announces he needs to take a piss again. Tom (Matthew Macfadyen) helps him and the two have an awkward yet tender moment in the bathroom. Tom notices Logan has chills and suggests they try to get a doctor. His suspicions are confirmed when Logan returns to the conference room and calls Shiv “Marcia.” It’s revealed that Logan has a UTI, which has effectively turned him “piss mad.” The team wonders if he was in his right mind when they declined the deal. They have moments to decide if they should go back to Stewy and Sandy or try to get Logan onstage in the hopes that he can sway the stakeholder vote their way.

The farce cranks up as Logan becomes convinced there’s a dead cat under his chair, and Colin effectively escorts an “invisible cat” out of the room. Just then, Kendall storms in, demanding they fix the deal, as he’s worked hard to build up the company, risking everything they’ve worked for. They tell Kendall to fuck off, trying to hide a sick Logan from his view. Shiv decides to go back to Sandi and hammers out a deal that would work for their fathers and themselves, adding some board seats so they too can lean in at the board table.

The family is out of options, and in perfecting timing, the “Raisin” aka the President of the United States calls Logan, demanding to speak to him. There’s debate over who’s the person to take the call. Connor (Alan Ruck) wants to take the call and tell the President to fuck off; Gerri suggests Roman should take the call. The President seemingly berates Roman on ATN’s recent unfavorable coverage. He informs Roman that he won’t be running again, thus opening the gate for a less sympathetic administration to lay down the law with its prosecution of Waystar. Connor’s the only person to delight in this news, as he thinks he can move forward with his presidential campaign.

Karl sets out to announce the deal to the shareholders. Mid-speech however, Kendall calmly walks onstage, asks for a moment of silence, and then recites the names of the victims of the crimes that took place on Waystar’s watch. He also announces he’s launching a foundation for other victims of sexual abuse that occurred at the hands of Waystar.

While most of this episode may have played out like a screwball comedy, its ending crosses into tragi-comedy. Instead of coming together, everyone’s left to fend for themselves. Logan reverts to his normal, angry self. Shiv tries to sell him on the deal; he hates it. Roman crouches down next to Logan and says “Shiv being a bitch?” Logan needs to have the last move and sends his assistant Kerry (Zoe Winters) to ask Roman to meet Logan in a room. Kendall, still buzzing after his “Sermon on the Marriott,” is then greeted by Jess (Juliana Canfield), who informs him that his dad has left. At the end of the episode, Kendall tries calling Logan. Upon seeing the call, Logan hands the phone to Kerry to block the number. 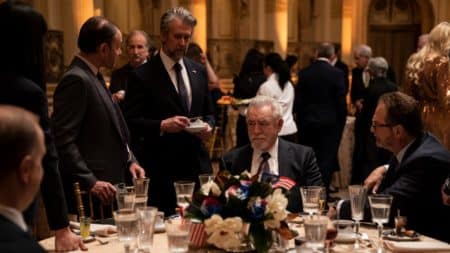 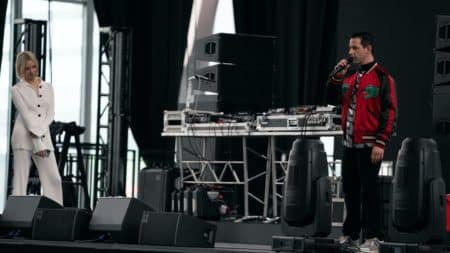 The director of Hustlers skillfully guides the audience through the grotesque bash the second-eldest Roy sibling throws for his 40th. 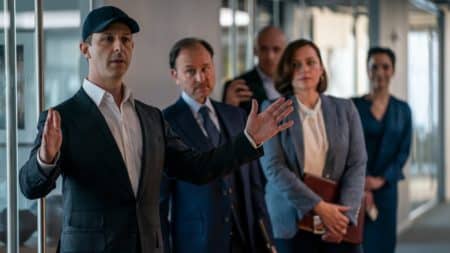 Succession Recap: The Roys’ schemes collide in “The Disruption”

This week's Succession sees the Roys' plots entangle with each other.