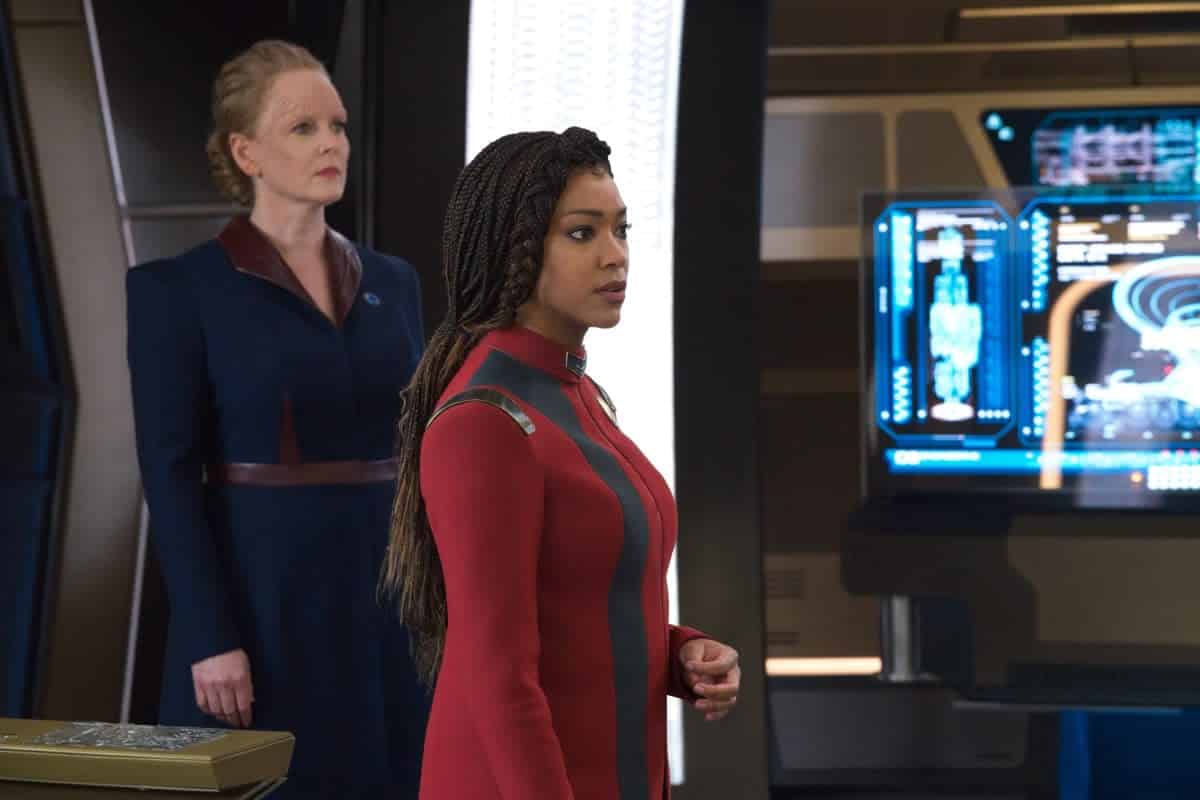 Plenty of Star Trek shows hit their stride in season four. The timing makes sense. After four years together, the cast and crew have all had time to jell. The writers have had long enough to hone the show’s voice and course correct for any missteps. And there’s still enough mileage left in the original premise and characters to take them to interesting places.

Star Trek: Discovery seems poised to follow suit. The show’s more confident, purposeful, and sound as it embarks on the fourth year of its mission. For the first time, the series can boast the consistency of the same pair of showrunners for consecutive seasons. Alex Kurtzman (CBS’ overall Trek impresario) and Michelle Paradise both return to guide our time-hopping heroes through another tour of duty in the 32nd century. The behind-the-scenes continuity helps, with clearer efforts to build on past stories and utilize connections from one season to the next.

Those stories are promising. Michael Burnham (Sonequa Martin-Green) is captain now, and must not only carry out Starfleet’s renewed mission of peace and exploration, but also face down political leaders with different approaches and agendas. Sylvia Tilly (Mary Wiseman) searches for a way forward, as her leap to the future and close calls from last season have given her new perspective. Cleveland Booker (David Ajala) grapples with important changes to his relationship with his family and his home planet. Saru (Doug Jones) must balance his bond to the Kelpien community with his Starfleet duties. And the found family of Paul Stamets (Anthony Rapp), Hugh Culber (Wilson Cruz), Adira Tal (Blu del Barrio), and Gray Tal (Ian Alexander) coalesces and overcomes challenges both spiritual and practical.

Everyone has something worthwhile to do. The personal and professional hurdles the characters face reveal important facets of the crew’s psyches and bring into relief the brave new world they’re trying to forge out of the discord of The Burn. All the character arcs at play, both big and small, are commendable, particularly in their focus on the consequences of what these people have been through after three years’ worth of adventures.

Likewise, the new season (or at least its first four episodes) does a good job of balancing standalone, episodic adventures with broader character arcs and bigger threats. Chief among the latter is a mysterious anomaly, which threatens not just the Federation but the galaxy as a whole. It’s a suitably Trekkian mystery, with life-or-death stakes and plenty of puzzling scientific inquiries to mull over.

More intriguing still is the arrival of Federation President Rillak (Chelah Horsdal), who has a more utilitarian view of international relations and command decisions than Michael. Her distinct perspective makes her a good foil and source of friction for the new captain. In the proud Trek tradition, their conflicts and conversations also provide the show a canvas upon which to consider grand notions of leadership and morality.

In that vein, the first quartet of episodes from season 4 do a nice job of capturing the spirit of Star Trek. With The Burn neutralized and starship fuel abundant once more, the doors to interstellar travel are again open. The Federation, and the U.S.S. Discovery in particular, are a vanguard for reforming the bonds broken amid the prior catastrophe and affirming the need for a stronger, more connected interstellar community. Ensuing debates over pragmatism and practicality versus ethical obligations and lingering loyalties abound.

The show continues its devotion to inclusion and representation, both in terms of which characters get to stand in the spotlight and the cultural metaphors that have long been the bread and butter of Star Trek. The sense of optimism, diversity, and mutual support at the heart of the franchise not only lives on here, but thrives.

So does the series’ devotion to action, for better and worse. A new video wall setup (a la The Mandalorian) has replaced location shooting for the series, to variable effect. Sometimes the results are impressive and immersive, but sometimes the combination of grit and gloss in the show’s visual style can be too unreal and off-putting. Despite that, escapes from alien attackers, tangles with spatial phenomenon, and away missions gone wrong all keep the heart-pumping with aplomb. One early episode even features stand-out imagery of Burnham in open space that evinces a commitment to artistry amid the breakneck thrills the show’s legally mandated to pack into its various voyages.

The catch, of course, is that while this first batch of episodes is a winner, Discovery’s long been better at beginnings than endings. More than one season of the show has started with a strong storytelling foundation and a worthwhile mystery, only to squander both with unsatisfying narrative hand-waves submerged in a sea of the usual fisticuffs and CGI explosions by the end. Season 4’s first handful of episodes toss a number of intriguing balls in the air. Whether Paradise, Kurtzman, and their team will be able to catch them all on the way down remains to be seen.

More to the point, Discovery is, rightfully, an emotional show. It’s admirably concerned with what the characters are thinking and feeling through all of these world-shaking events, and how the major players relate to one another. But at times, scenes with blunt dialogue, cold visuals, or an affected style of performance that suffuses the series render too many of those moments less-than-affecting. Regardless of good intentions, the worthy sentiments at play don’t always land.

I’ll still take this opening bow from Discovery, with its heart and head both clearly in the right place, even if execution falters now and then.

Occasionally, Discovery even has an odd sense of detachment. You can tell in some places the show’s working hard to make you feel something, and the plot and characters may even be well-suited for the goal. But the show can’t always cut through the inevitable artifice of the presentation to seize on the germ of something authentic at its core. The effort is sound, but the ability to conjure genuine feeling on a scene-to-scene basis comes and goes.

And yet, I’ll still take this opening bow from Discovery, with its heart and head both clearly in the right place, even if execution falters now and then. I don’t know if season 4 will be the year when the series puts it all together. We’ve seen strong starts followed by stumbles at the finish line before, and some recurring issues have survived through changes in both showrunners and centuries.

But as the show enters year four, it knows exactly what it wants to be. This is the most sharp and self-assured Star Trek: Discovery has ever been. Its moral and galaxy-imperiling quandaries are clear. Its characters are directed but complicated. Its efforts to open up the big tent Star Trek represents and welcome all inside are palpable and heartening. These are the elements the brightest lights in the franchise have brought to bear when reaching their highest heights. Only time will tell if Discovery can do the same. Nevertheless there’s good reason to hope, and to watch this cast and crew take flight once more.