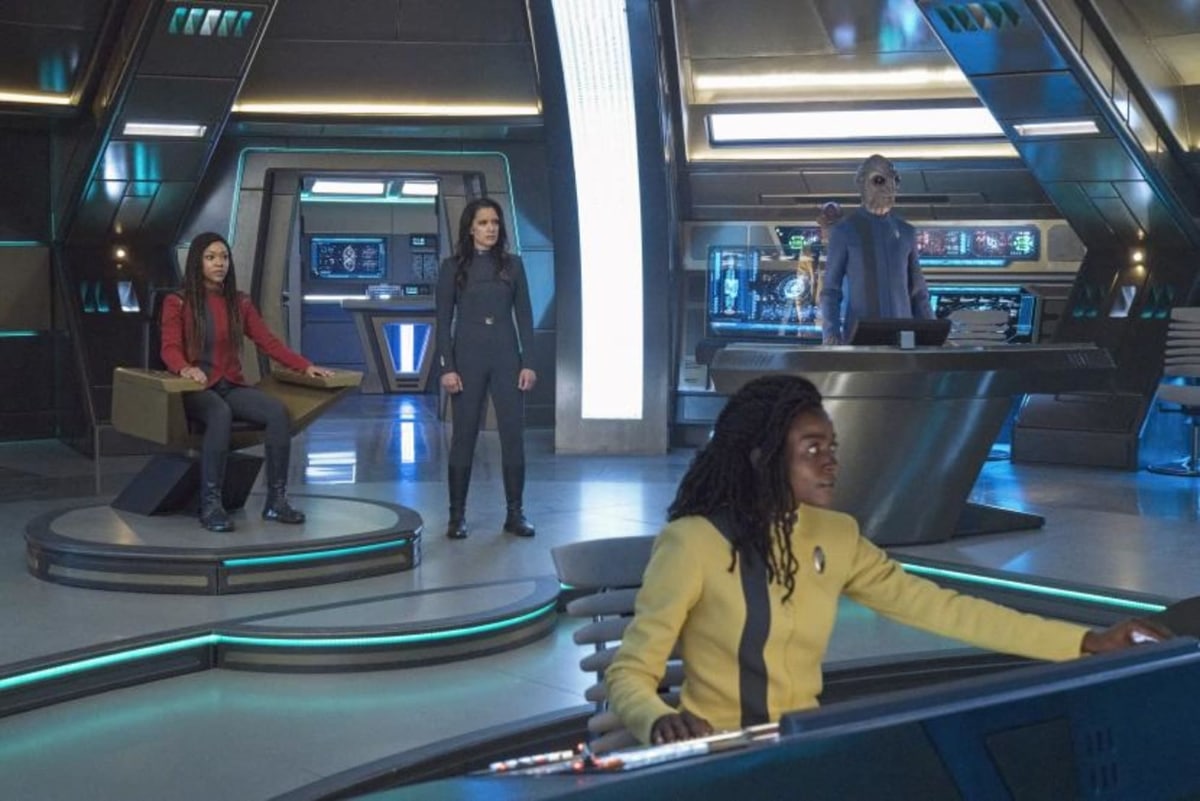 A tug of war between the personal and the pragmatic is unconvincing in practice in episode 9 of Discovery.

The best scene in “Rubicon” comes at the very end of episode 9 of Star Trek: Discovery. Michael Burnham (Sonequa Martin-Green) and Commander Nhan (Rachel Ancheril) stop and take stock after the wild events of the hour. They talk as friends, and the moment feels real. Sure, there’s a clumsy bit of backstory. Nhan describes her visit home and the lessons learned with the poetic air folks on television use all the time, but people in real life rarely do. But there’s a warmth to the exchange, an ease in the dynamic between her and Michael, that makes the moment seem genuine.

It’s a trick, of course. The two characters have barely interacted on-screen outside of the season 3 episode where Nhan left the show. Before then, she was barely even a character, popping up in a handful of big moments but lacking the sort of shading that makes characters seem fully formed. Despite that, the sense of familiarity in their dialogue, the amiable tone the performers convey, makes you believe it. That’s the magic of storytelling on screen.

That’s especially striking since that sort of magic is all but absent in the rest of the episode.

It bears repeating, week after week, that the bones of the fourth season of Discovery are good, even in less-than-stellar outings. This week, Admiral Vance (Oded Fehr) sends Captain Burnham and the Discovery to stop Cleveland Booker (David Ajala) and Ruon Tarka (Shawn Doyle) from destroying the DMA. The catch is that he and President Rillak recognize that Michael is too close to be objective, and so assign Nhan to advise and take over if Burnham can’t make the tough choices.

The ensuing ethical and practical decisions happen in stereo. Burnham and Book both want to succeed in their missions without hurting the other. Nhan and Tarka, on the other hand, are willing to achieve their goals by any means necessary. It’s a tug of war on both sides of the conflict. The hard-nosed pragmatists insist their foes have made their beds, and it’s time to fire the weapons, while the estranged lovers keep trying to find a third option that stops, but doesn’t destroy, the opposition.

The approach creates a good structure for the episode of reaction and counter-reaction. The choices here extend the season’s animating motifs: whether Michael can make the tough call that may result in personal losses but serve the greater good, and whether she and Book can resolve the conflicting pulls of their shared bond and opposing moral philosophies.

Nhan serves as a firm-but-friendly counterweight to Burnham’s decision-making, highlighting the stakes and the moments where Michael’s personal attachments could be clouding her judgment. Tarka serves a similar role for Book, making self-serving (but not unreasonable) points about why these rogues need to carry out their plan even if Michael is literally and figuratively standing in their way.

There’s a subspace anomaly-sized problem though. You can’t feel the personal stakes of those conflicts, or the moral force of the dilemmas the characters face, because the dialogue and performances feel so far removed from actual human expression. So many conversations in “Rubicon” play as though the characters are talking to the audience rather than to one another.

Of course, they are. All TV dialogue is for the benefit of the audience. The trick, though, is to blend the key bits of information and big ideas with the recognizable rhythms of human speech and the tenor of how we speak to one another in real life. That’s not to say all dialogue must be naturalistic. Star Trek has long had room for grandiose speeches and outsized performances (see: Shatner, William). But it does have to fool us into thinking people might really say and, more importantly, feel these things. And it has to make us buy their back-and-forths as genuine human conversations. Time and again, “Rubicon” fails at that.

Tarka’s grand bit of oratory about expected utility calculations scans as hokey and tin-eared, even coming from a villainous quirk-fest with a flair for the dramatic. A ham-fisted argument between Bryce and Rhys over whether Book’s actions are contemptible or understandable seems like a conspicuously-designed attempt to highlight opposing viewpoints on the issue rather than a legitimate debate between colleagues which just so happens to serve the same purpose.

Despite the pleasantness of the closing heart-to-heart between Nhan and Burnham, their initial conversation falls into the same trap. The show has to explain sundry details like how Nhan came back, why she’s only showing up now, and what happened to her grand plans from the last time we saw her. The clumsy, wooden exposition lobbed back and forth to answer those questions cuts the legs out from under what’s meant to be a heartening reunion between friends. The staginess of it, the lack of compelling emotion at the center of the scene, render these interactions unconvincing.

It’s emblematic of the strange disconnect in “Rubicon,” where the core ideas are good, but the words spoken and emotional tones presented don’t live up to them. These flaws make it all the more noteworthy when something authentic cuts through the noise.

To the point, halfway through the episode, it looks as though push has come to shove. Burnham is going to have to give the order to destroy Book’s ship, and she’s not sure if she can do it. Time freezes. The shots becomes impressionistic. Once again, we hear her deep breaths and feel the weight of the choice: to save the galaxy or save the one that you love. It’s one of the few moments that grabs you here. And not for nothing, it’s nigh-wordless.

So many conversations in “Rubicon” play as though the characters are talking to the audience rather than to one another.

But it’s the exception, not the rule. Most of “Rubicon” is spent unraveling technobabble problems or clunkily debating the right choices. Book’s ship and the Discovery do play a decent cat and mouse game inside the DMA (although the details are unclear and the environment seems to contradict the more dangerous version we saw in “Anomaly“). There’s fun and excitement to be had from the two sides’ ploys and counters. But few of them are intuitive, and the dueling jumps in particular seem awfully convenient, particularly when, for some reason, there’s plenty of time to pause and debate the next choice despite the supposed urgency of the situation.

Still, the friendly foes eventually settle on a middle ground, thereby clinching the major thematic point of the episode. Taking a cue from Dr. Culber (Wilson Cruz) and Saru (Doug Jones), Book and Burnham push past the binary and find a compromise. Burnham enlists Stamets (Anthony Rapp) to use the DMA’s boronite consumption rate to determine how long the anomaly will stay in one place, which turns out to be a week. It’s enough to buy both sides time and a temporary cease-fire.

Michael explains to Book that the Federation will try its peaceful contact method with Species 10-C in that time period. She promises that if it doesn’t work by then, he and Tarka can blow the damn thing up. It admittedly seems a little nuts that both sides would agree to this after the preceding firefight, but it’s plausibly founded on Book and Burnham’s mutual trust.

Of course, Tarka unilaterally blows the damn thing up anyway. It’s something of a copout, letting the show escalate the season-length threat without dirtying the hands of the characters we know and like. No one has to make the hard choices. Instead, their high-minded compromise is merely disrupted by a dastardly bad guy. At least there’s some poignance in Tarka’s last ditch effort being all for naught. He learns the DMA is powered from the other side of the wormhole, and thus he can’t commandeer the power source for his own ends. The bitter poetry of that is worth something.

Alas, the words used to support his story are no sweeter. “Rubicon” ends on a high note, with Burnham and Nhan sharing their lovely moment together. The duo brings the highfalutin “Find a middle ground” message of this episode of Discovery down to a personal level and steeps it in the warmth of human interaction. It’s a tack strangely absent in nearly every other scene in this episode. The dearth of that earned emotion makes what could be a worthy story, of noble individuals straining under difficult decisions and personal connections, into a tale of cardboard cutouts announcing their big ideas without offering the real humanity necessary to sustain them.