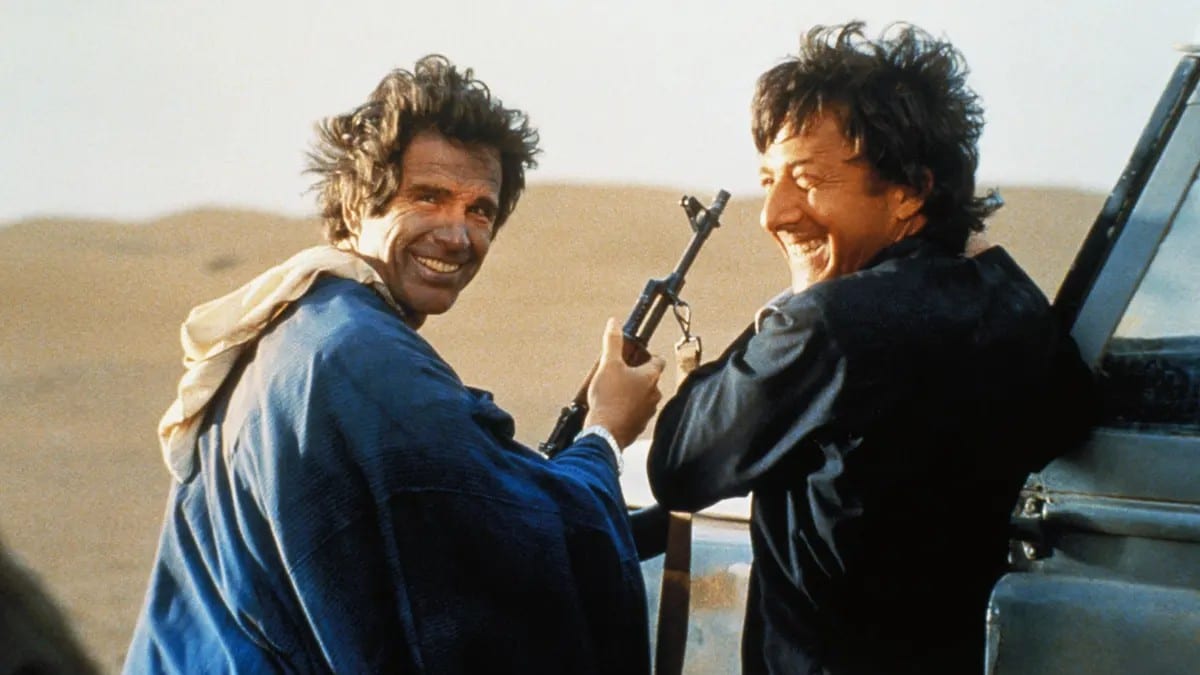 With perhaps the single exception of Heaven’s Gate, perhaps no American film produced in the 1980s received more bad press, critical hostility and commercial indifference than Elaine May’s Ishtar. Scathing press coverage revolved around its enormous budget—which extended to the reviews, many of which felt as if they were written by investors rather than critics—and studio machinations pretty much ensured that it would fail. Audiences stayed away in droves; as May herself once quipped, “If all the people who hate Ishtar had seen it, I would be a rich woman today.”

It was a disaster that became an instant shorthand punchline for Hollywood excess and brought May’s career as a director to a screeching halt. But like Heaven’s Gate, no failed film of that era has been more deserving of a similar critical reappraisal than this one. Seen far removed from its attending controversies, Ishtar can be properly regarded as one of the funniest and most politically astute films of the decade.

Ishtar began as a noble gesture on the part of Warren Beatty, for whom May had co-written his huge hit Heaven Can Wait (1978) and did one of her famous uncredited rewrite jobs on his Oscar-winning epic Reds (1981). By this time, May had directed three feature films—A New Leaf (1971), The Heartbreak Kid (1972) and Mikey and Nicky (1976). While the first two were hits, her unconventional filmmaking approach and tendency to shoot a lot of film did not sit too well with the powers-that-be, and both A New Leaf and Mikey and Nicky ended in acrimonious battles between her and Paramount Pictures. Beatty felt that part of her problem was that she had never had a strong producer in her corner; if he, as one of the more successful names in Hollywood at the time, agreed to produce and star in a project of hers, he could give her the backing that would allow her to work to her full potential.

The project that she devised would turn out to be, of all things, an affectionate homage to the so-called Road movies that Bob Hope and Bing Crosby made, in which the comic pair got into bizarre scrapes, sang songs, and wooed Dorothy Lamour. In May’s take, Beatty and Dustin Hoffman would play Lyle Rogers and Chuck Clarke, a staggeringly mediocre singer-songwriter duo who manage to snag a booking in Marrakech. But, during a stopover in the fictional neighboring country of Ishtar, they inadvertently land in the middle of a conflict between the corrupt C.I.A.-backed regime and a group of freedom fighters looking to overthrow the emir.

At various times, the two once-inseparable pals find themselves at odds, mostly due to their mutual lust for beautiful rebel Shirra Assel (Isabelle Adjani) and the machinations of sleazy C.I.A. operative Jim Harrison (Charles Grodin). In a twist on the well-established public personas of the two leads, Beatty would play the bumbling, socially awkward loser, Hoffman the slick ladies’ man.

The production difficulties that ensued once the cameras began to roll since entered the annals of Hollywood legend, so there’s no need to rehash in detail. Suffice to say, May’s tendency towards indecisiveness and shooting enormous amounts of footage caused great strife between her and cinematographer Vittorio Storaro—he was more concerned with capturing the visual beauty of the desert, she was more concerned with the comedy. While Beatty backed her throughout, tensions soon boiled over between her and the three leads as well. Meanwhile, the studio heads were growing increasingly appalled at the overruns but realized that they couldn’t do anything without having the entire project collapse.

Then, during production, producer David Puttnam began his brief and ill-advised tenure as the head of Columbia Pictures; since he had already publicly feuded with both Beatty and Hoffman in the past, he essentially washed his hands of the whole thing and refused to have anything to do with the production.

Once the shooting finally stopped, Ishtar had fallen so far behind schedule that its ballyhooed Christmas 1986 release had to be punted to the following May. All of this was breathlessly reported in the press; as a result, when it finally opened, virtually everyone decreed it to be a disaster and the meager opening grosses quickly shrank to nil.

I confess that when I saw it that opening weekend, I was one of those naysayers. There were things about it that I liked—Grodin is absolutely hysterical as the CIA weasel, the deliberately bad songs that May composed with Paul Williams for Chuck and Lyle to sing were pretty funny, and there was some inspired slapstick involving a blind camel who becomes integral to the plot. But it too often seemed weird instead of funny. More significantly, for a film whose budget seemed to suggest spectacle, Ishtar was curiously lacking in that very department. The desert sequences lacked any sort of visual splendor and the big action climax literally involves an attack by a single helicopter that immediately flies away after our heroes briefly return the fire.

But a few years later, I happened upon it on cable one day and was genuinely shocked to discover how great it was. The stuff that I liked before was still funny as hell, but this time around, everything else seemed to click into place. The political satire of the U.S. meddling in foreign affairs was both very funny (“No, if two Americans die, it has to be unofficially”) and infinitely more cutting than most studio films of the era. The lack of expected visual splendor actually put those old Road movies closer to mind, where Hope and Crosby never left the Paramount lot and no one seemed to care.

Even the much-derided conceit of having Beatty play the schmuck and Hoffman the stud proved to be more amusing this time around. In one scene, Lyle tries to pep up a despondent Chuck by remarking, “It takes a lot of nerve to have nothing at your age, don’t you understand that? You say you’d rather have nothing than settle for less.” The line is funny on its own, but Beatty delivers it with a poignance that makes it resonate beyond the laugh. To my eyes, the only real flaw to Ishtar is May’s waste of the extraordinarily gifted Adjani on a role that gives her nothing to do.

The further removed Ishtar gets from its notorious debut, the more people seem to respond to its nutty charms. (I once hosted a screening of it in 2004, and can assure you that it played like gangbusters.) Sadly, the brutal reception killed May’s directorial career. But at least she began and ended things on the highest of notes, even if it took us all years to realize it. Ishtar is a film made by someone who would rather have nothing than settle for less. Those of us who adore it (the film counts Quentin Tarantino, Lena Dunham and Martin Scorsese among its better-known admirers) wouldn’t have it any other way.