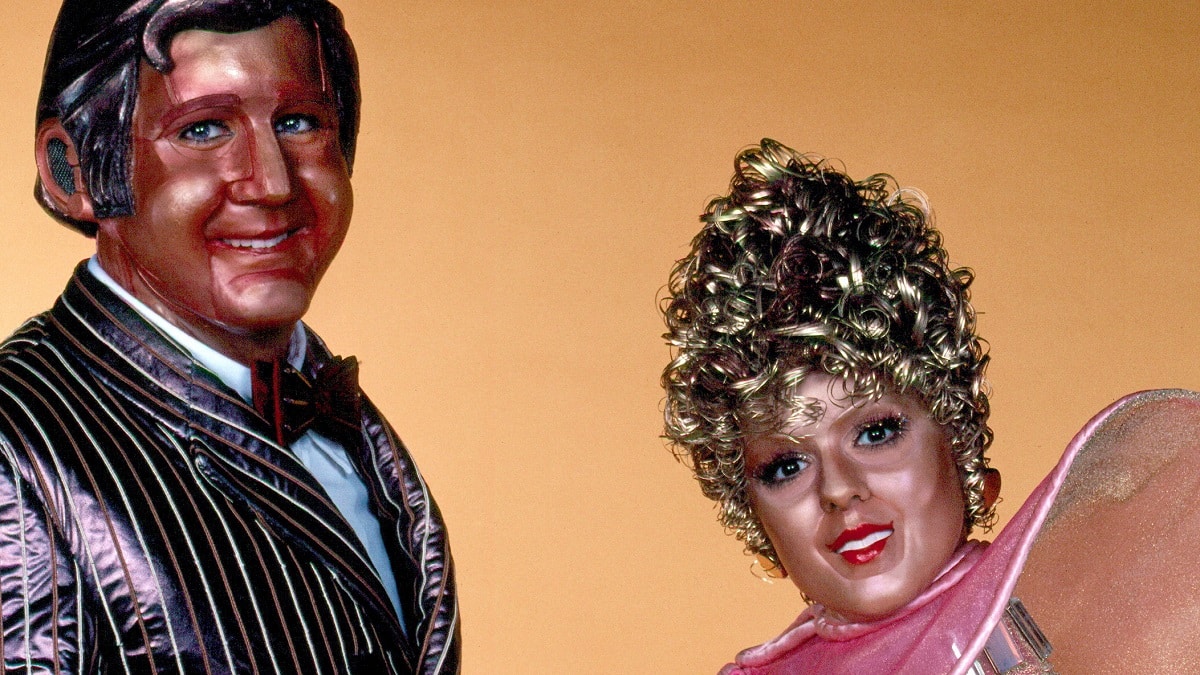 A re-evaluation of Andy Kaufman’s biggest film role leads to more or less the same conclusions.

Looking back, the holiday movie season of 1981 was an undeniably exciting time to be heading out to the multiplex. Unspooling in theaters at that time were such films as Reds, On Golden Pond, Ragtime, Neighbors, Pennies from Heaven, Sharky’s Machine, Ghost Story, Absence of Malice, Chariots of Fire, Four Friends, Rollover, Time Bandits, and a reissue of Cinderella—all intelligent, ambitious and well-made movies. Even if they didn’t all pay off critically or financially initially, they have managed to stand the test of time.

One exception to this otherwise stellar lineup was Heartbeeps, the infamous Andy Kaufman vehicle that tanked at the box office, drew some of the worst reviews ever penned, and which has thus far resisted any call for some kind of reevaluation. It is rare that one ever comes across a genuinely perfect cinematic object, but that is precisely what Heartbeeps is in its own perverse way.

Here is a film where it seems every possible bad creative choice was selected and executed with ghastly precision. This is the kind of project producing duo Bialystock & Bloom might have selected if they went into film. Though I can assure you when it was all over, absolutely no one involved remarked, “Where did we go right?”

The whole debacle began when Kaufman, who was going back and forth between his enormously popular work as the lovable Latka on the hit series Taxi and his increasingly bizarre and controversial experiments in dadaist comedy, pitched Universal Studios on a film project. Together with cohort Bob Zmuda, they wrote a script based around his notorious alter ego, Tony Clifton. Evidently not self-referential enough with just Clifton, it also would find him playing a deranged and monstrous version of himself. The screenplay was hilarious, but deeply weird. You can sometimes find it online and it is worth the effort. It was the kind of thing that Charlie Kaufman would perfect a couple of decades later. The notion that any studio would have even contemplated making it back then boggles the mind.

However, the executives at Universal had a more pressing concern. Although a star from Taxi and his appearances on Saturday Night Live, Kaufman’s big-screen career to date at that point consisted of minor roles. Neither his roles in Larry Cohen’s God Told Me To nor Marty Feldman’s religious satire In God We Trust proved that he could carry a film on his own or attract a paying audience. Therefore, they proposed that Kaufman do another movie first to prove his viability as a film star. If that worked, then the Clifton project could theoretically proceed. That, in a nutshell, is how he came to appear in Heartbeeps. You have to wonder what those other scripts were to make this seem like the ideal project for him.

For those who never saw the film or successfully purged it from their memories, Heartbeeps unfolds in the distant future of 1995. It features Kaufman as Val Com 17485, a valet robot who arrives at a factory to await repairs. There he meets Aqua Com 89405 (Bernadette Peters), a robot designed for hostess duties. The two quickly fall into what humans call “love” and decide to escape and start a new life for themselves.

You have to wonder what those other scripts must have been like to make all involved think that this was the ideal project for [Andy Kaufman] to tackle.

Much of the abbreviated running time is dedicated to the two robots wandering in search of a place to live and an all-important power supply. They build a small robot child out of spare parts named Phil to demonstrate their love. Catskill, a robot stand-up comedian (with a voice supplied by Jack Carter)–who, in a prime example of the comedic sensibility on display, is always shown sitting down–soon joins them. What passes for action and drama comes when a malfunctioning police robot known as Crimebuster. It goes off in pursuit of the two fugitives, causing all sorts of mayhem along the way.

Considering Kaufman’s ability to shift characters in the blink of an eye, you might think Heartbeeps would take advantage. Perhaps have him play a robot whose malfunctions cause him to shift personalities constantly. That might not have saved the film, but it certainly would have livened things up a bit.

Instead, his only mode suggests Latka after being hit in the back of the head with a tire iron. He ends up getting submerged in the character’s utter innocuousness. To make matters worse, the makeup that he and Peters wore to create their robotic looks was unyielding. It strands these two normally expressive performers looking as if they had been flash-frozen the entire film.

Although the complete waste of Kaufman’s talents remains the greatest crime committed by Heartbeeps, it is hardly the only one. John Hill’s screenplay unfolds like a barely feature-length (78 minutes) version of the cheapo animated television specials that used to pop up on television to sell crap to kids. In his follow-up to the cult favorite Rock n Roll High School, director Allan Arkush inexplicably gives the proceedings the kind of ponderous pacing that one might expect in a film by Ingmar Bergman at his most anguished and not in something revolving around two robots falling in love.

Fans of Arkush’s Roger Corman days will appreciate him slipping favorite performers like Paul Bartel, Mary Woronov, and Dick Miller into a major studio project. Unfortunately, not even they can do much of anything with the material. At least in those Corman films, things actually happened from time to time.

When the studio finally saw Arkush’s initial cut, they were appalled and responded by firing him and recutting it themselves. They even went as far as to remove the contributions of Jerry Garcia, who supplied the sounds for Phil’s voice. When it was finally released, reviewers were appalled, moviegoers stayed away in droves, and any chance of Kaufman being allowed to do The Tony Clifton Story went down the drain along with any hope of him becoming a movie star.

While the Kaufman cult has grown by leaps and bounds… not even his most devout fans are willing to try to make the case for Heartbeeps.

While the Kaufman cult has grown by leaps and bounds since his tragically early death in 1984, not even his most devout fans are willing to try to make the case for Heartbeeps. Hell, even I cannot make a claim for it as some kind of overlooked masterpiece. Me, the guy who has tried to suggest to you that films like Nothing but Trouble and Buddy Buddy are better than their reputations might suggest.

So instead, I would like to conclude this essay by citing the only three relatively notable things that one could say about Heartbeeps.