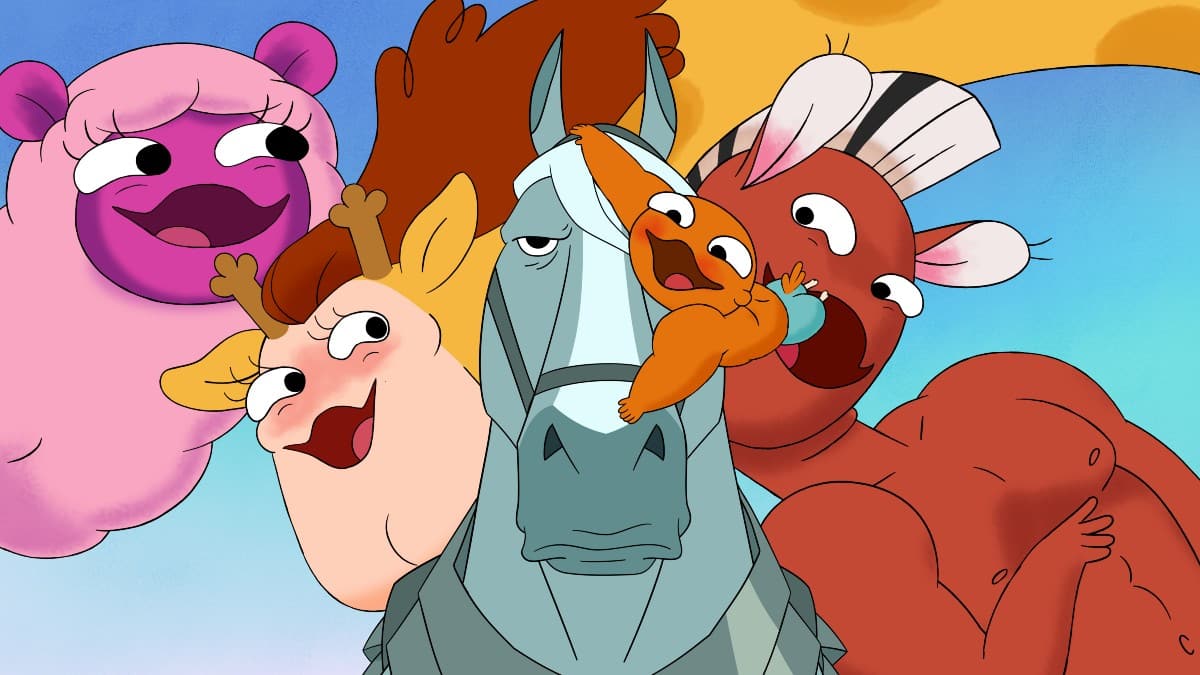 Netflix’s new animated show Centaurworld, created by Megan Nicole Dong, is a whimsical show set in a world of centaurs. It’s chock full of catchy songs and comedic moments that adults and kids will enjoy, but it also bogs itself down with complicated mythology that steals time from its lovable characters.

Centaurworld follows Horse (Kimiko Glenn), a horse who, alongside fellow warrior Rider (Jessie Mueller), wages desperate battles in a desolate landscape. During one such engagement, a rift between worlds tears open and drops Horse into the technicolor, musical land of Centaurworld.

The animation in Centaurworld is stunning.

Here Horse meets a comical, musical herd of centaurs consisting of Wammawink (Megan Hilty), Zulius (Parvesh Cheena), Durpleton (Josh Radnor), Glendale (Megan Nicole Dong), and Ched (Chris Diamantopoulos). Together Horse and her newfound acquaintances travel the Rainbow Road in search of Shamans. These mystics can aid Horse in collecting the scattered parts of a magical key—one that can reopen the rift and hopefully reunite her with Rider.

The animation in Centaurworld is stunning. Its human world is full of sharp angles, shadows, and orange hues. The audience drops into an anime-inspired battle, following Horse and Rider as they wage war against violent creatures. When the rift opens and Horse falls into the bubbly, candy-colored hues of Centaurworld, the show’s look changes dramatically. The characters are round and exaggerated, cartoons in the classic sense that grant their land a happy-go-lucky feeling.

The show’s mixture of styles highlights Horse’s alienation and emphasizes her status as a battle-hardened outsider in a fantastic and bubbly land. However, as the series progresses, Horse’s look evolves. She begins to lose her sharp features and becomes rounder, signaling her growing attachment to this new, strange world.

Centaurworld‘s cast is chock-full of Broadway stars and comedy-heavy hitters. Kimiko Glenn is excellent as Horse, a hero stuck between two worlds who gradually, haltingly lays down some of her warrior tendencies in favor of openness and vulnerability amongst her new friends. During one song she denies she’s crying because she’s sad. No, her tears are because she’s frustrated! She’s a perfect match for Rider, voiced by Tony-winner Jessie Mueller.

The Centaur herd ensemble Horse befriends is a ragtag group composed of doofus Durpleton (an endearing Radnor), kleptomaniac Glendale (a scene-stealing Dong), self-absorbed Zulious (a hilarious Cheena), and angsty Ched (played with aggression and hidden warmth by Diamantopoulos). The herd is led by their fearless, cheerful leader Wammawink (an excellent Hilty, balancing the humor and drama with many songs to belt). Centaurworld also makes space for welcome guest stars, including Tony-winner Renée Elise Goldberry as Waterbaby, a Centaur Shaman, and Paul F. Tompkins as Horse’s Tail (yes, Horse’s literal tail).

The program excels when it delves into its characters. Wammawink may be all bubbly, but she’s putting on smiles to hide her childhood trauma. Durpleton has daddy issues that manifest themselves in his flatulence (anytime he passes gas, it’s an affirmation in his dad’s voice). Glendale steals to fill the literal void in her magical stomach. Zulious’s concerns about his looks are a way to hide his insecurities. Ched’s outward aggression and professed hatred of Horse belie his inner softness. And Horse herself has spent so much time in battle, so much time metaphorically armored up, that she must learn how to set down her shield and let others into her heart. Centaurworld‘s heart lies in the importance of finding your herd, choosing the family who will walk alongside you on your journey in life.

Where Centaurworld struggles is the matter of its mythology. The rift between the human and centaur worlds was sealed to protect them both. Reopening it to reunite Horse with Rider puts everyone at risk. It’s a compelling obstacle, but all of the information critical to understanding it arrives late in the show and distracts from Centaurworld‘s wonderful characters. There is an epic battle where everyone pulls together to defeat a fearsome foe, but by and large, it’s too much information delivered too late in the series. While it is setting up stakes and stories for a future season, it draws away from the ensemble and the emotional impact of their personal stories and leaves the season’s endgame a bit of a shrug.

Centaurworld is a diverting show, one easily binged in a weekend. It boasts entertaining songs, dazzling animation, and a powerful cast performing compelling characters. Aside from the clumsiness of its mythology, it’s a program well worth gathering your herd for.