Franchises come, franchises go, but franchise wannabes are forever. Put another way: where there’s a comic-book property featuring superpowers or a high-concept, easily digestible hook, there’s usually a producer or movie studio nabbing the film option, sometimes before the comic book series in question has even reached readers. Even as hope springs eternal, failures are innumerable, especially outside the Marvel Entertainment Complex.

Luckily, Gina Prince-Bythewood’s adaptation of Greg Rucka and Leandro Fernández’s creator-owned series for Image Comics, The Old Guard, works both as a franchise starter — the ending practically, justifiably begs for a sequel — and a standalone superhero/action film that offers a surprising number of diversionary pleasures.

Prince-Bythewood’s previous work (Beyond the Lights, The Secret Life of Bees, Love & Basketball) leans heavily towards intimate, nuanced, character-driven drama. It’s a finely honed skill she uses here to deliver the combination of world-building and big, action-heavy beats not typical of the superhero genre.

Rather than simply jumping into an attention-grabbing opener, Prince-Bythewood opens with the bloody aftermath of a fatal firefight, before hitting the rewind button and introducing The Old Guard’s central characters in hangout mode. There’s Andy (Charlize Theron), a 6,000-year-old immortal who’s grown weary fighting seemingly meaningless battles across millennia; Nicky (Luca Marinelli) and Joe (Marwan Kenzari), centuries-old lovers who met on opposing sides of the Crusades; and Booker (Matthias Schoenaerts) the youngest member of the Guard. They exchange the relaxed, easygoing pleasantries typical of longtime comrades-in-arms and metaphysically-minded mercenaries.

Prince-Bythewood smartly avoids the kind of hyperkinetic camerawork and rapid-fire editing typical of inexperienced action directors, over-eager to dive into the next stunt-heavy action scene. Rucka, meanwhile, understands that audiences don’t need to be spoon-fed world-building information. He respects his audience’s collective intelligence by not over-explaining the relatively simple premise, the characters, or their relationships with each other.

It helps too that Rucka relies on a tried-and-true narrative device — the audience viewpoint character, in the form of a newly “born” immortal, Nile Freeman (KiKi Layne). When Nile, a U.S. Marine, survives an otherwise fatal knife wound in Afghanistan, Andy scoops her up unwillingly and throws her headlong into their world of immortal mercenary work — and the people who want to hunt them down.

The Old Guard, works both as a franchise starter… and a standalone superhero/action film that offers a surprising number of diversionary pleasures.

If Nile’s journey sounds somewhat familiar, it should: Rucka borrows the central premise of the long-defunct Highlander series but strips out the “Chosen One” point that pits immortals against each other, swapping out head chops with headshots. All the while, Rucka deftly interweaves a central plot involving classic bad-guy Evil Co. Merrick Pharmaceuticals and its hissable, hoodie-wearing CEO (Harry Melling), who wants to capture the immortals and extract the secrets of their longevity for maximum profit. Aiding him is an ethically-compromised ex-CIA agent (Chiwetel Ejiofor) who betrays the immortals on a faux-rescue mission. Prince-Bythewood adds a few global stops (e.g., Morocco, Afghanistan, France, and the U.K.) to give The Old Guard a much-needed sense of scale generally unsupported by a film with a relatively modest production budget.

That modest budget gives Prince-Bythewood only a handful of action scenes, but she handles each of them with ample assurance and dexterity. She focuses on clean lines, clear spatial geometry, and her cast’s individual performance styles. Theron’s willingness to take on more action-oriented roles, from Mad Max: Fury Road to Atomic Blonde, often doing her own stunts, pays off handsomely here. There’s never any doubt that Andy (short for Andromache of Scythia) can handle any firearm, blade, or hand-to-hand combat style. Making Nile a U.S. Marine erases the need to explain Nile’s abilities or waste valuable screen time training her up into a full member of the Guard. She’s gained those skills through months, if not years, of hard work, concentration, and dedication.

In creating characters who are nearly immortal, but can also suffer excruciating physical pain and emotional anguish, Prince-Bythewood and Rucka hit a narrative sweet spot, taking the long view on human nature and behavior within an action movie framework. Andy, Nile, and the others share both superhuman healing powers and emotional vulnerability, making them some of the most relatable, most memorable comic-book-to-film characters in recent memory. Bring on the sequels. Bring on all the sequels.

The Old Guard cuts its way through throngs of baddies to Netflix July 10th. 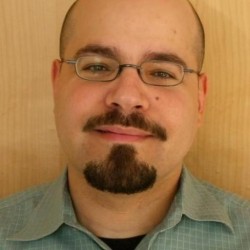 Mel Valentin
A longtime resident of San Francisco and lifelong film lover, Mel Valentin has written hundreds of film reviews, articles, and interviews that have since disappeared through no actions of his own. He continues to diligently watch and review films from different genres, countries, and periods for finer culture sites around the Internet.

Latest posts by Mel Valentin (see all)
Liked it? Take a second to support The Spool on Patreon!