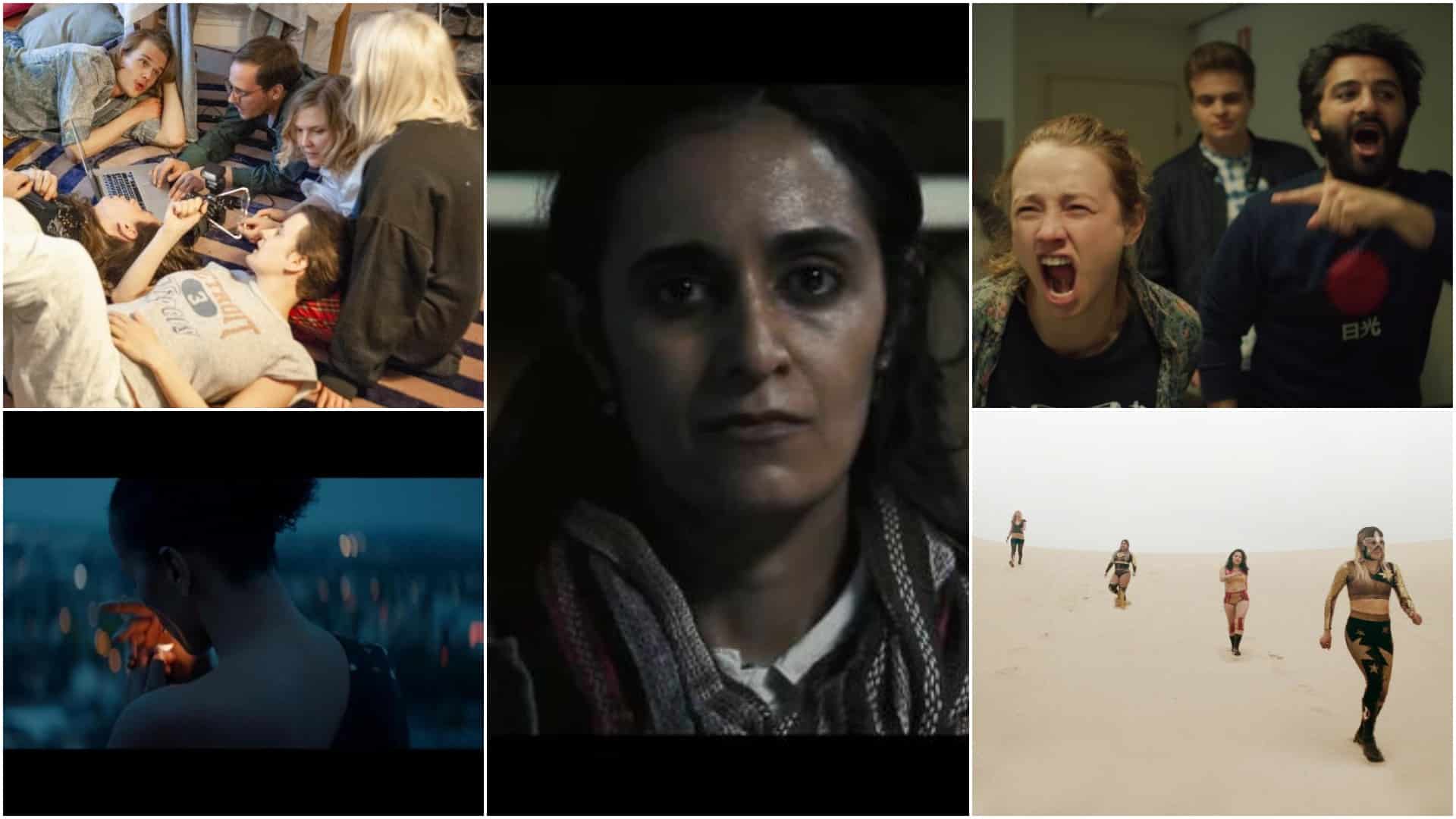 Five films from around the world come to this year’s SXSW, from tales of oppression to liberation to everything in between.

Of the five films that comprised the Global section of this year’s South by Southwest film festival, my favorite by far was Bantu Mama, a fascinating drama from the Dominican Republic that starts off as one kind of film and gradually transforms into something different and deeper than expected.

The film revolves around Emma (Clarisse Albrecht), a French woman of African descent who takes a vacation to the Dominican Republic and winds up getting arrested at the airport as she tries to return home. As the police are taking her away, there is an accident that sets Emma free but with nowhere to go and no way to get back home.

She is soon discovered and taken in by three underaged kids (Scarlett Reyes, Arturo Perez and Euris Javiel) who are living on their own in a dangerous neighborhood. While holing up with then as she tries to figure a way out of her predicament, she gradually takes on a more maternal position with the kids that takes a decided turn when she is informed of what they want in exchange for their help.

On paper, that description may seem a little gross — yet another example of the narrative that suggests that a woman somehow isn’t complete unless she is a mother — but that’s ultimately not the case here. Instead, director Ivan Herrara, who also co-wrote the screenplay with Albrecht, offers up a more nuanced take on family ties and cultural roots without getting too mawkish for its own good.

The film is aided immeasurably by the lovely performances by Albrecht and the three non-professional kids. Their scenes have such an authenticity about them that there are moments when you have to remind yourself that this is not a documentary.

Bantu Mama is also interesting in its depiction of the run-down areas of the Dominican Republic where it’s set. Having grown up there, Herrara depicts them in a way that shows a genuine affection for the area and its people while never sugarcoating the danger and poverty around every corner.

It’s a bit of a slow burn that may make some viewers a little antsy after a while. But those who stick it out to the end may find themselves surprised by just how deeply affected they are.

“Affected” is also a word that I would use to describe the Finnish import Fucking With Nobody, though using an entirely different definition. As it begins, filmmaker Hanna (Hannaleena Hauru, who also co-directed and co-wrote the screenplay with Lasse Poser), has just learned that she has lost a directing job to a male rival whose profile has grown thanks to a series of contrived Instagram photos that he has posted depicting the domestic bliss that he shares with his wife, who is also the writer of his new project.

Annoyed beyond measure by this, Hanna and some of her radical feminist friends decide to post a series of photos depicting her fake romance with friend Ekku (Samuel Kujala) as a way of satirically commenting on the value that society places on such imagery. Alas, the satirical aspect is lost on the public, who swoon to the new romance playing out on their social media, and both Hanna and Ekku find their fortunes changing for the better while their colleagues grow frustrated as their project begins to turn into the very thing they were attempting to skewer.

The initial premise of the film is pure rom-com fluff—the kind of thing that you could imagine someone like Sandra Bullock knocking out of the park back in the day—but once viewers have been lured in, Hauru and Poser start pulling the rug out from under viewers with a series of increasingly self-reflexive moves that will put viewers more in the mind of Charlie Kaufman than Nora Ephron.

The moves that Hauru and Poser make are certainly audacious, but they just don’t quite work. For the most part, they are not nearly as clever as they seem to think that they are and they soon become tiresome. That said, Fucking with Nobody does have a certain degree of ambition to it that should be admired—it is just a shame that those ambitions never quite lead to anything. Nevertheless, my guess is that before long, some American studio will eventually snap up the rights and do a remake, stripping out all of the breaking of the fourth wall, of course. I predict a hit.

Another film that seems destined for remake status is the half-raucous/half-sweet Norwegian comedy Ninjababy. A loose adaptation of the graphic novel from Inga H Saetre, who co-wrote the screenplay with director Yngvild She Flikke and Johan Fasting, the film is about Rakel (Kristine Kujath Thorp), an aimless 23-year-old woman with vague dreams of becoming a cartoonist who is shocked to discover that not only is she pregnant but she is six-and-a half months along and therefore unable to get the abortion that she wants.

With absolutely no interest in becoming a mother, Rakel tries to figure out her next moves with the help of Mos (Nader Khademi), a sweetly goofy martial arts instructor that she briefly believes is the father, and her unborn child itself, who appears to her in animated form and who is just as caustic about everything as she is—the kid’s reaction alone to the discovery of the supremely self-absorbed twerp (Arthur Berning) who is the actual father, is particularly hilarious.

The premise may make Ninjababy sound like what might have emerged if Judd Apatow had made Look Who’s Talking (1989) but while the humor is rude and raucous throughout, it also develops a more serious and thoughtful edge as it follows Rakel as she is forced to negotiate tricky situations that cannot be resolved with a combination of sex, booze and sarcasm—not that she doesn’t try to deploy those at first.

Likewise, the gimmick of the unborn kid being depicted as a smart-mouthed cartoon works at first because its commentary is oftentimes hilarious but as the film continues on, this aspect also grows smarter and deeper and eventually leads to a nicely done payoff. Unlike a lot of other movies that you or I could name, the combination of crude jokes and heartfelt material really works her and transforms Ninjababy into a real charmer worth seeking out.

Although the final two films in the Global section are superficially different in any number of ways, both deal with certain key issues that are so similar that one could easily imagine them playing together on a double feature.

Luchradoras is a documentary from Mexican filmmakers Paola Calvo and and Patrick Jasim that follows the lives of four female wrestlers as they go about their lives. Lady Candy wrestles to earn money for a visa so that she can visit her children in America, Mini Senerita is returning to the ring to help support her adult daughter and Little Star and Baby Star are sisters from a family of wrestlers determined to keep up tradition.

The one thing they all have in common besides wrestling is that all four of them live in Ciudad Juarez, a place known as being one of the most dangerous cities in the world, especially for women, and the knowledge of the dangers that they—as well as all of the other women in the area—face on a daily basis because of their gender is always hovering over them.

There are moments in the film that are painful to watch—the hostility that they sometimes face from their audiences is truly shocking—but even if you’re not much of a wrestling fan, watching them going about the sport they love as a way of taking a stand against female subjugation and victimhood is undeniably exciting.

The issues of subjugation against women also crop up in Trapped, a film by debuting director Manal Khaled that is the first film of Arab origin to play at SXSW. Set around the events of 2011’s Arab Spring uprisings in Egypt, the film introduces us to a number of women of varying ages and stations in life who nevertheless all find themselves trapped in various spaces—ranging from a basement to a bathhouse—as chaos erupts in the streets. They find themselves struggling to break free of the physical, emotional, and societal constraints they are currently trapped in.

Inspired by real stories, Khaled and screenwriter Rasha Azab have created a film that may seem slight at first but which grows in power as it goes along, leading to a spellbinding final sequence in which a number of the women come together in the bathhouse and are able to forge a sense of empowerment out of their shared desire for something more out of their lives and for all women.

Even though it clocks in at barely 80 minutes, Trapped is a powerful, inspiring and radical work that makes one excited to see what Khaled will come up with next.