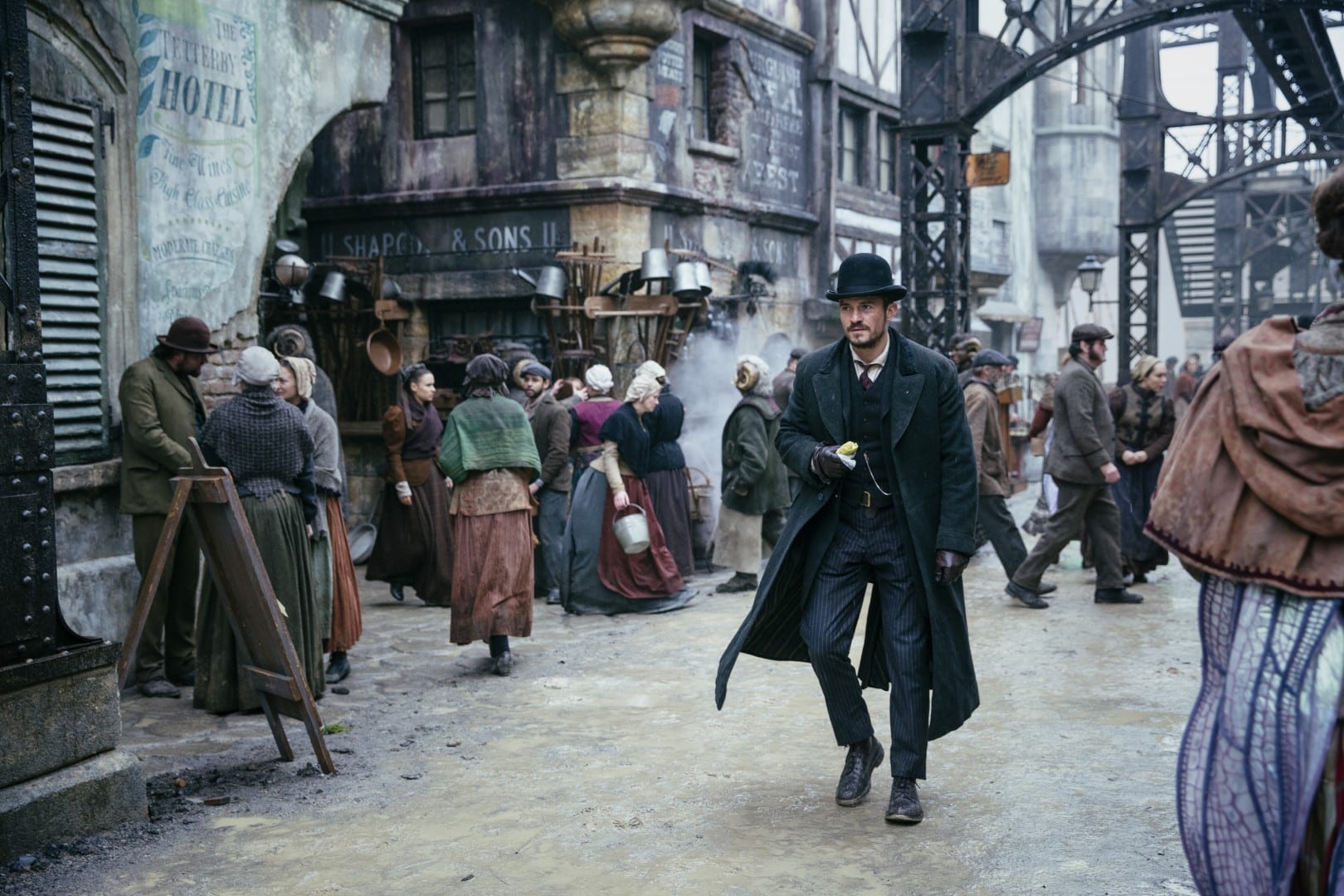 Brilliant production design and strong lead performances get bogged down in too much worldbuilding in Amazon’s high-budget fantasy series.

One can’t argue that Carnival Row does not have big things on its mind. Colonialism, racism, the danger of the thin blue line, the exploitation of immigrants, and classism are but a few of the topics it seeks to wrestle with, either allegorically or head-on. The abandon with which series co-creator Travis Beacham (Pacific Rim) loads these issues onto Row‘s framework is undeniably admirable. (Listen to our interview with Beacham on The Spool’s weekly interview podcast to learn more.)

It doesn’t, however, make for good television.

It’s the 7th Century on a planet where humans exist (but is likely not our Earth). For instance, despite it being the 7th Century, the “civilized” West looks a lot like mid-19th Century. Regardless, it’s perhaps easiest to think of it as a magic-touched Victorian England and just move on.

Tirnanoc, a faerie homeland, has long been under attack by The Pact. For a time, the Burgue (again, just think England) attempted to aid Tirnanoc but it failed. Now, the mystical creatures seem to face either death in their homeland or second-class treatment — if they can survive the boat trip — in the city of their former human allies. After an unspecified amount of time, Vignette Stonemoss (Cara Delevingne) has given up on saving her fellow fae and chosen to become a refugee herself.

In the Burgue awaits her former lover-turned-cop Rycroft Philostrate (Orlando Bloom), whom she believes dead (and has been wearing a widow’s braid in mourning for) since he disappeared from Tirnanoc. A friend who escaped ahead of her, the poet and artist Tourmaline Larou (Karla Crome), has turned to sex work to make a living, as the Burgue has little interest in supporting the art of the faerie people. Additionally, there’s a growing political anti-fae movement akin to white supremacist movements, political machinations involving the apparently fae-friendly head of government Absalom Breakspear (Jared Harris) and his secretly ambitious wife Piety Breakspear (Indira Varma), a Jack the Ripper-esque murderer known as Jack the Unseemlie, the aristocratic-yet-debt-stricken Spurnrose family, and the arrival of a rich faun named Agreus Astrayon (David Gyasi). To say Carnival Row is overstuffed would be to declare Jeff Bezos “a bit wealthy.”

With so many balls in the air, some things will inevitably get underserved. In the case of Row, the incessant need to world-build makes the whole show feel like a survey course. We get a taste of this subplot and then we are off to the next. An insight into this character and then we won’t see them for another episode and a half. Time progresses, but it is never clear how. Does the first season unfold over the course of a month or two years? Either feels equally plausible. Even though the season progresses in a relatively linear fashion (excepting an all-flashback episode) it’s difficult to construct a coherent sequence of events when the credits roll. It’s not confusing, per se, just a mess.

Amongst that mess, however, Row still often manages to intrigue. On a pure artistic design and direction standpoint, the world of Carnival is a wonder. The city is impeccably laid out and grounds the viewer in a wonderful sense of geography. For a show with such a lumpy sense of plot layout and pacing, its attention to its physical word is incredible. From the cramped “slums” of the fae immigrant community to the boarding house where Rycroft lives rather than set down roots to the upper-class neighborhood, each environ is wonderfully conceived and enacted.

For a show with such a lumpy sense of plot layout and pacing, its attention to its physical word is incredible.

As for the leads, Delevingne gets a strong a role as she’s had yet, and seems ready for the weight of it, effortlessly capturing the ache of living with the kind of anger that hollows one out inside. Bloom modulates on a similar frequency, which is helpful to twinning the former lovers’ narratives but dims their chemistry considerably. The leads are doing good work, but the plot restricts them tightly.

It’s unsurprising, then, that the performances that prove most eye-catching come from the supporting players. Crome takes what could have been an easily dismissible, hopelessly tragic character and makes her compelling. There’s a lightness and ease to Larou that lend her scenes the kind of extra zing Row desperately needs. On the upper crust side of the Burgue, the chemistry between Tamzin Merchant’s naïve and sometimes cruel Imogen Spurnrose and Gyasi’s Agreus gives teeth to what at first appears to be a pretty bland bit of lip-service plotting.

Unfortunately, all of this sumptuous production design and charming performances end up fighting Carnival Row’s natural resting state: bloated, scattered, and choking on implication. Everything Row wants to be about is worthy of attention. It just also happens to be deserving of a much better show.

Carnival Row flies into theaters on the back of faerie wings August 30.