When asked to name his favorite of his own films (at what turned out to be a premature retirement press conference in 2013), master animator Hayao Miyazaki chose Howl’s Moving Castle. Perhaps his age at the time played a role in that choice. Miyazaki’s fables typically take the viewpoint of a child, but Howl’s Moving Castle is one of his few vehicles to explore old age. The 18-year-old protagonist magically trapped inside the body of a 90-year-old woman gave the then 60-year-old director a chance to have his main character complain of an aching back (“it’s not easy being old,” observes heroine Sophie (voiced by Emily Mortimer as a young woman in the English dub, by Jean Simmons as she ages) as her recently-aged spine crackles painfully when she stands up) and to stage a major set piece around a contest between two elderly ladies gingerly racing up a steep stone staircase.

The source of Sophie’s sudden transformation is the Witch of the Waste (Lauren Bacall), who strides one day into her mother’s shop and curses the young girl for an innocent and accidental connection to the Witch’s rival, the wizard Howl (Christian Bale). Through the intervention of a turnip-headed scarecrow (Crispin Freeman), the involuntarily-disguised Sophie soon finds herself in Howl’s employ, living in his moving castle powered by a wisecracking captive fire demon.

Loosely based on the children’s novel of the same name by Welsh writer Diana Wynne Jones, Howl’s Moving Castle is set in a mythical European fairy tale kingdom—the picturesque cobblestone streets and red-trousered dragoons with handlebar mustaches suggest France on the eve of World War I, but it could just as easily be set in Wales or Austria-Hungary. Magic and fantastical technology coexist here. Behemoth military airships prowl the skies, and steam-powered automobiles are available to the upper classes.

Howl’s castle itself is as clinking, clanking a collection of caliginous cartoon junk as ever animated — a clutter of turrets, gangways, girders, and smokestacks, with a rustic cottage attached, belching smoke and lurching along on mechanized chicken legs like some replica of Baba Yaga’s hut commissioned by a mad steampunk billionaire.

One of the central ideas in fairy tales is metamorphosis: handsome princes secreted away in the body of frogs, geese who transmute eggs into gold. Howl’s Moving Castle has enough metamorphoses to make Ovid’s head spin — most of the major characters are under some kind of form-shifting spell. The trope of the prince imprisoned in another body occurs here, but many of the characters’ transformations are more mysterious and psychological. When the Witch of the Waste’s powers are stripped from her, the spell that has been holding up her multiple chins over the centuries collapses with her fading power, and her face turns into a mess that looks like a deflated wedding cake with makeup.

The mercurial Howl goes through numerous mutations. He turns into a hawklike creature in order to do battle with dirigibles, but each alteration leaves him closer to being permanently trapped as a monster. He begins the film with bangs as blond as the front man in a boy band, but by the movie’s end stress, and Sophie’s mismanagement of his dye collection, has taken its toll and left him a brunette. The bad hairdo punctures his vanity, and he secretes a green goo and nearly dissolves into a snotty puddle of self-pity on the floor.

And aging—the curse that turns Sophie from lassie to granny—is the movie’s key transmogrification, the plot’s engine. As the film advances, she sometimes inexplicably appears as a hybrid of young and old woman. She finally ends her metaphorical and morphological journey in that state, with a fresh girlish complexion topped by a gray fringe of wisdom.

Although everyone admires Miyazaki’s astounding visual compositions—which may be put to more baroque purposes here than anywhere in his canon—and his gift for spectacle, the story’s loose ends and the bafflement of the time-traveling finale put some viewers off.

Some critics and fans rate Howl as a “lesser” Miyazaki, but it may be his most overwrought, grandiose, and rambling work—in other words, his best, if you value rambunctious energy over tasteful restraint. The mix of classical European influences, contemporary fantasy literature, Japanese sensibilities, and Miyazaki’s own preoccupations fuse here into a unique universe.

Like Howl’s castle, this movie is cobbled together from mismatched parts; it looks unstable and threatens to tumble over as it rambles along, but master wizardry holds it together. 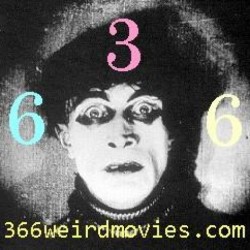 Gregory J. Smalley
Gregory J. Smalley is the founder and editor-in-chief of 366 Weird Movies. His film writing has appeared in "Pop Matters" as well as "The Spool." He is a member of the Online Film Critic's Society.

Latest posts by Gregory J. Smalley (see all)
Liked it? Take a second to support The Spool on Patreon!