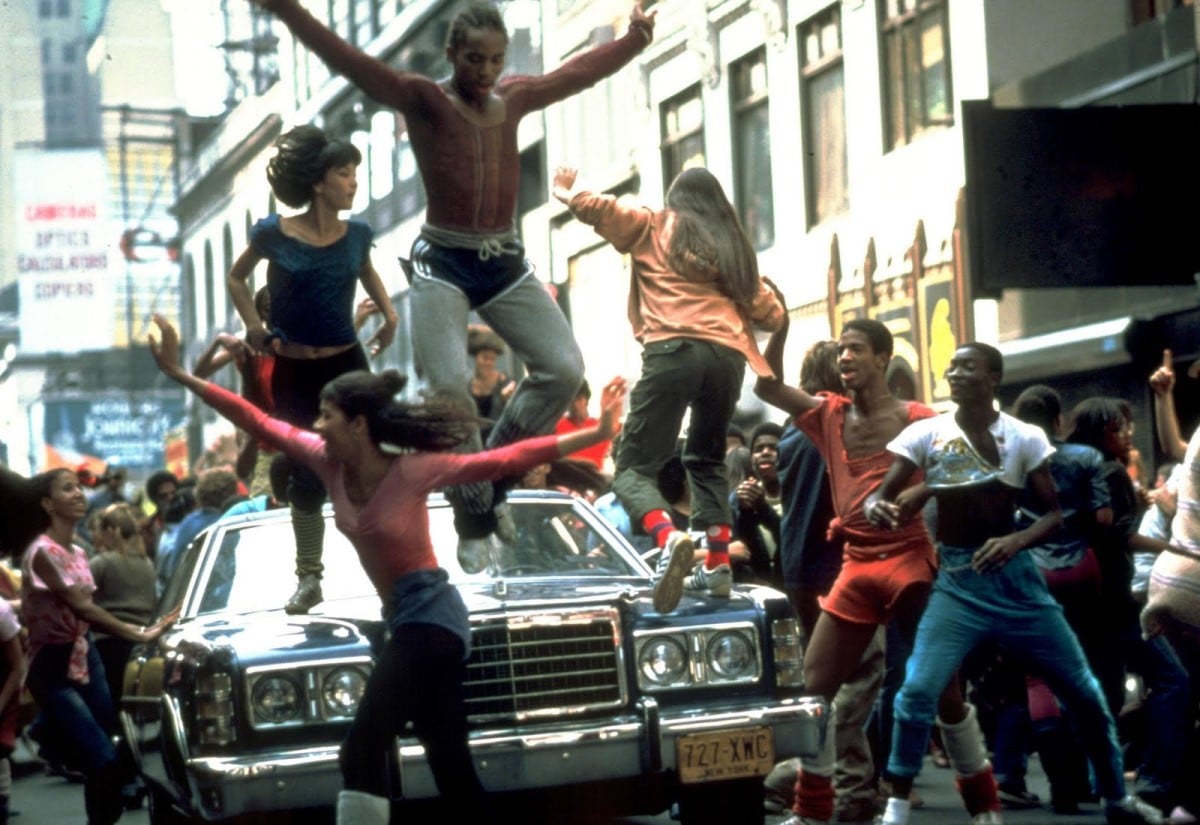 You should never give up on your dreams. But you’ll probably need to modify them at some point, particularly if your dreams involve a career in the arts. We are on this planet for a very finite amount of time, with even less time to devote ourselves to dancing, music or acting. There’s no real expiration date for becoming a successful writer, although you may find self-promotion in the ever changing world of social media a challenge after a certain age. Acting, dance, and music, however, have far narrower windows for success, and those windows are far out of reach for most people. Alan Parker’s Fame, released forty years ago this month, told a sobering truth about show business: just being talented and ambitious isn’t enough to make it.

Ostensibly a musical drama about student life at New York City’s High School for Performing Arts (now named LaGuardia High School), Fame occasionally feels like a documentary. This is not just because the cast consisted largely of unknown actors, many of them plucked right from the real life High School for Performing Arts itself, but because it focuses far more on grim reality than flights of fancy. The peppy, optimistic songs on the soundtrack provide a stark contrast to the rejection, cruel setbacks and dashed dreams the characters experience.

LaGuardia High School’s alumni over the past few decades has included Adrien Brody, Jennifer Aniston, Nicki Minaj, Awkwafina, and Timothee Chalamet. That’s impressive, until you learn that LaGuardia’s average enrollment consists of nearly 3,000 students per year. The ratio of how many students attend LaGuardia to how many of them manage to make a successful career out of their chosen medium is not much higher than it would be at a standard public high school. Yet, to be accepted, you can’t just be talented, you must also be driven, ambitious, and convinced that you have what it takes to make it. Of course, that isn’t all it takes. More important than perhaps even raw talent itself is luck, timing, connections, and selling yourself, and those are things no school can teach you.

Fame opens with our protagonists successfully auditioning for slots in the high school’s freshman class. Doris (Maureen Teefy) and Montgomery (Paul McCrane) are acting students, along with Ralph, Puerto Rican but who’s trying to pass himself off as white (played by Barry Miller, a white actor trying to pass himself off as Puerto Rican). Bruno (Lee Curreri) is an insecure musician, while Coco (Irene Cara) is a triple threat, enrolling in the acting, music, and dancing programs. Finally, Leroy (Gene Anthony Ray) sort of ends up in the school by accident, after upstaging his dance partner during her audition.

The peppy, optimistic songs on the soundtrack provide a stark contrast to the rejection, cruel setbacks and dashed dreams the characters experience.

In addition to hours of dance, music and acting classes, the students are expected to maintain a rigorous academic curriculum, and live as though they’re already professional performers. It’s work, constant work, for what might in the end be almost no payoff, except a chronic case of impostor syndrome and shin splints. Only during the musical numbers does anyone look like they’re having any fun, and those are surprisingly few and far between. They’re fantasies, what the audience imagines life at a performing arts school to be like, until Parker brings us swiftly back down to Earth.

Each of the main protagonists has a huge stumbling block on their respective roads to success from the minute we encounter them: Leroy is too angry, Ralph is too immature, Montgomery is too gay, Bruno is too self-absorbed, Coco is too naive, Doris is too timid (and, the movie implies, too Jewish). Almost all of them are from working class, if not downright poor backgrounds, putting them at a further disadvantage. Their teachers are tough and unbending. There are certain standards that need to be met at the High School for Performing Arts, and if you can’t meet them, there’s the door, no excuses. We see this with Lisa (Laura Dean), who’s expelled from the dance program because her teacher doesn’t believe that she’s trying. It’s not that she’s bad, it’s that she’s just not good enough. In a way, that’s worse, because at least if you’re truly bad, people will remember you. Who remembers just average?

For every scene of ambitious young teenagers displaying dazzling talent with ballet shoes or a violin, there’s one that provides a bleak balance of how the world may treat them once they’re outside the relatively safe confines of school. Doris has an awkward encounter with Michael (Boyd Gaines), a promising acting student who left New York to pursue an agent contract in California, only to find himself back home just three years later waiting tables. We’re never told why Michael returns so soon, because we already know why: because the chances of becoming a successful actor, particularly in movies, are so slim that they’re almost negligible. Is there still a chance for him to succeed? Of course. Will he succeed? Well. Who can say.

Ralph lets very minor success as a stand-up comedian go to his head, and he ends up ruining his relationship with Doris. Coco is taken advantage of by a sleazy “producer.” The harshest scene, however, is when rich girl Hilary (Antonia Franceschi), pregnant after a shock-the-parents fling with Leroy, tearfully insists to a nurse at an abortion clinic that she has big dreams, and her whole life planned out as a professional ballet dancer, to which the nurse, in a flat “whatever you say, honey” tone, responds by asking her if she’s going to pay with American Express or Mastercard. She didn’t ask. That’s Hilary’s business.

While the TV series spinoff managed to maintain some of the spirit (and some of the cast) of the original, the 2009 remake scrubbed sparkling clean any references to homosexuality, abortion, rape, or other potentially challenging issues, and presented success in the performing arts as something anyone can achieve with just a little bit of pluck, and some good friends cheering you on. More High School Musical than Fame, it gutted everything from Fame that makes it compelling and realistic, in favor of choppy MTV editing and bland, cardboard cutout characters.

The students in Fame aren’t cute. Like actual teenagers, like we all were once, they’re often selfish and childish, turning against each other the moment insecurity rears its ugly head. The uplifting, hopeful closing song “I Sing the Body Electric” is almost jarring. Most of the students, before even graduating high school, have experienced a taste of how ruthless show business will be, but they’re going to keep trying anyway. It’s all they know how to do, and the world keeps turning on hopes and dreams.