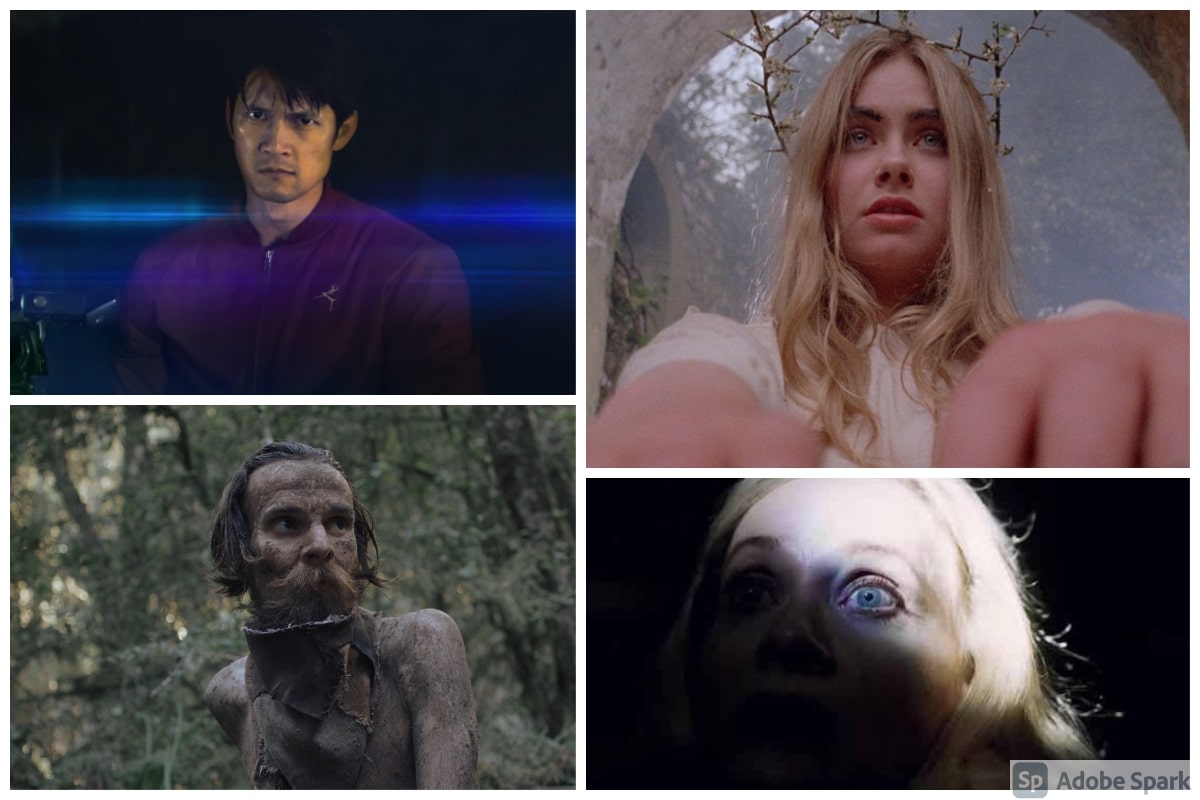 We’re in the middle of a horror renaissance, and some of the most exciting recent films in the genre, including The Babadook, Hereditary, and Get Out, did time on the festival circuit before seeing widespread release. It’s difficult to predict which festival screenings will end up hitting big and which won’t, but this year’s selection of South by Southwest’s “Midnighters” features offer a number of possibilities. Here’s a quick overview of the first few movies to be shown:

Top of the heap so far is Kier-la Janisse’s Woodlands Dark and Days Bewitched, an extremely thorough documentary on folk horror. A three hour-plus running time may be daunting, but not a minute is wasted on this scrupulously researched, endlessly fascinating movie. Rather than the usual black t-shirt wearing talking heads yammering over the same clips we’ve seen before, Janisse goes deep, taking an academic approach and exploring the roots of folk horror, and how it’s served over time as a reflection of both current events, and humanity in general.

Woodlands Dark focuses initially on folk horror in the British Isles, and its origins in paganism, followed by American folk horror, and then folk horror around the world, including Australia, Poland, Central America, Russia and Japan. It’s the segment on American folk horror where the documentary really shines, giving time to different regions of the country and their attendant themes, such as New England Puritanism and Deep South poverty. The origins of the “Indian burial ground” trope are also explored, as well as how colonialism and slavery shaped voodoo and Black folk horror.

While considerable time is given to famous films in the genre, such as The Wicker Man and Midsommar, much of the movies featured in Woodlands Dark are relatively obscure (certainly to the casual horror fan), in essence creating a syllabus for itself by the end. Due largely to time constraints, most documentaries on film take a surface, incomplete approach. Here, however, the audience is left feeling as though they’ve genuinely been educated on an underrated sub-genre, one that combines history, religion and anthropology to unsettling results.

Next up is Travis Stevens’ gruesome, darkly funny vampire thriller Jakob’s Wife, starring horror veterans Barbara Crampton and Larry Fessenden. Crampton plays Anne, a bored, lonely minister’s wife quietly chafing at the bit, while Fessenden is her nice but uptight and oblivious husband. While flirting with the idea of having a fling with an old flame, Anne has a horrifying encounter with a shadowy figure, which leaves her with an unquenchable thirst for blood. On the upside, she feels sexier and more sure of herself than she’s felt in years, much to Jakob’s chagrin.

Jakob’s Wife immediately follows Stevens’ similarly gruesome and darkly funny Girl on the Third Floor, and it’s clear that he’s a rising star in horror, with a special skill for putting a unique flair on well-worn tropes. So eager is she to experience something, anything exciting and new in her life that Anne almost instantly accepts being a vampire. Her issues with it initially are ones of practicality, such as how to acquire blood without having to kill everyone in her small town. It quickly becomes part of her daily routine as a housewife, purchasing bags of blood from the grocery store butcher department and serving it to herself in a pitcher like an afternoon martini. It’s only until she realizes that Jakob, who she still loves (even though the romantic spark in their relationship seems to have died years ago), stands in the way of her realizing her full potential as a creature of the night that problems arise.

It helps that Crampton plays the role with depth and sensitivity. She’s sorrowful that the life she wants for herself may not have a place for Jakob in it (particularly since he’s a disappointing combination of stubborn and cowardly), but determined to spend some part of what remains of her time on this planet living for herself. What she’s going through is not unlike the grief of divorce, if divorce involved growing a set of fangs (though, frankly, talk to a couple divorce lawyers and they’ll tell you that it does turn you into a monster, in a way).

In a role that could have (and would have, in the hands of a less skilled director) been aged down, what a wonderful rarity to see an actress over sixty (hell, over fifty or even forty) be allowed to be both sexy, and sexual. Anne’s transformation into what’s essentially a Bizarro World version of herself could have been treated as something grotesque or pathetic, but instead it’s fascinating, even inspiring. We should all come into ourselves and discover who we are well past middle age, even if we might have to rip off a couple heads to get there.

After that is Jaco Bouwer’s Gaia, creepy environmental horror in the same vein as Alex Garland’s Annihilation. Gabi (Monique Rockman), a park ranger on assignment in the remote wilderness of South Africa, is separated from her partner and injured after accidentally setting off a trap. She’s taken in by Barend (Carel Nel) and Stefan (Alex van Dyk), a father and son living off the grid and nearly feral ever since Barend’s wife died more than a decade earlier. Gabi is wary of the suspicious, erratic Barend, who seems to be hiding something, but finds herself drawn to the barely verbal Stefan, who’s been living in the forest since he was a child.

The woods around Barend and Stefan’s cabin are alive, not just with animals and insects, but mushroom-human hybrid creatures that are both horrifying and strangely beautiful. The spores they emit create others like them, and Barend and Stefan spend much of their day both keeping them at bay, and trying to appease the otherworldly being who seems to be in charge of the whole thing. Meanwhile, the recovering Gaby is stuck in a discomfiting place, having to trust Barend, but suspecting that he’s at least as dangerous as the creatures outside.

For an indie film, Gaia’s production values are astonishing. The shroom monsters are visceral, the forest setting is both eerie and enticing. It does an excellent job of creating a sense of unease from the opening scene on, and of setting Barend up as a sort of unreliable narrator. He’s either a loving but overprotective and paranoid father, or he’s an abuser who’s gaslit his son into believing the safest place to be is a tiny radius outside their home. Nel’s performance anchors what could be a stock villain-or-is-he character, radiating fear, madness, and sly cunning in his eyes.

Other than too many uses of “oh, it was just a dream” moments, where Gaia falters a bit is in the weird, uncomfortable relationship that develops between Gabi and Stefan. It’s unclear how old Stefan is, perhaps late teens to early 20s, but he’s childlike in nature, and Gabi’s friendly interest in him turning romantic doesn’t sit right with the rest of the movie (particularly since Gabi is the heroine and audience surrogate). The clever irony is, of course, that in inserting herself between father and son (let alone her immediate desire to “civilize” Stefan), Gabi inadvertently reinforces Barend’s beliefs about the outside world, that it means to interfere and do his little family harm.

Last but not least, there’s Jacob Gentry’s stylish but ultimately empty Broadcast Signal Intrusion. A technothriller inspired by the infamous Max Headroom signal hijacking in 1987, Broadcast Signal Intrusion stars Harry Shum, Jr. as James, a video archivist struggling with the loss of his wife, who disappeared a year earlier. While working one evening, he sees footage of a disturbing broadcast interruption of a masked figure, one of three such recordings, and the origins of which were never discovered.

Both to appease his paranoid nature and to distract himself from the loss of his wife, James goes on a wild goose chase to find the source of the signal interruptions, uncovering a conspiracy that may offer some clues in the cases of several missing women — including James’ wife. With its late 90s setting, which includes James getting much of his information about the conspiracy from BBB message boards, the movie occasionally feels like a darker, grittier version of Fox’s turn of the century spate of conspiracy thriller TV shows, including The Lone Gunmen and Harsh Realm. That, along with the reference to 80s sitcom Small Wonder, create an odd sense of nostalgia for a time that was maybe a little weirder than we realize.

With its film noir influences and nods to Brian de Palma (specifically Blow Out), Broadcast Signal Intrusion has atmosphere to spare, but it’s at the expense of a hollow core. Though it’s through no fault of Shum’s capable performance (and it’s certainly nice to see an Asian-American actor playing the lead in sci-fi/horror rather than someone who merely supplies the lead information), we don’t really know enough about James as a person to be all that invested in his tumultuous journey from grieving husband to full-blown paranoiac. He goes from 0 to dangerously obsessed in just a scene or two, and that’s far from the only time it feels like a key moment was edited out of the final cut.

He seems to solve the mystery a little too easily, picking up threads than an FBI investigation overlooked, with the help of stalker-turned-friend Alice (Kelley Mack), whose motivations, both to stalk and to eventually help James, are never really explained. Presumably it’s meant to enhance the sense that no character, even James himself, can really be trusted, but instead it just feels like an incomplete story.