In the garden of wonderments that is the body of work by Japanese animation master Hayao Miyazaki, his 2001 gem Spirited Away is at once one of his most accessible films to a Western audience and the one most distinctly rooted in Japanese culture and lore. The tale of Chihiro, a 10-year-old girl who resents being moved away from all her friends, only to find herself working in a bathhouse for the gods, doesn’t just use its home country’s fraught relationship with deities as a backdrop. It takes an Alice in Wonderland-style narrative as a springboard to deal with the subject head on.

It’s also a fine children’s film, the kind that elicits a deepening bond across repeat viewings and the passage of time, mostly because Miyazaki refuses to talk down to younger viewers. That’s been a constant in all of his filmography, but it’s particularly conspicuous here because the stakes for its young protagonist are bigger than in most of his previous features aimed at younger viewers. It involves conquering fears and finding oneself in situations where safety is not a given.

But what’s striking about Spirited Away is the ordinariness in the way it opens and closes, how it hides its wondrous realm in the cloak of the quotidian. Chihiro, voiced by Rumi Hiiragi in its original Japanese and Daveigh Chase in its English-language dub, is roused from her funk when her parents stop their drive to their new suburban home to wander around an abandoned theme park. Grown-ups will probably detect a jab at consumerism when her parents begin to wolf down succulent dishes at an unattended food stand at this theme park that is not as abandoned as it appears.

Miyazaki shifts Chihiro’s temperament from boredom to apprehension to sheer terror in a matter of minutes once she realizes her parents’ gluttony has literally turned them into pigs. The sun has set, and as night begins to fall, a sinister pall falls over the park as it comes to life and a ferry is seen approaching across a large body of water that was not there moments ago. Longtime collaborator Joe Hisaishi’s lush and melodious score simultaneously conveys the pageantry of the gods and spirits disembarking with Chihiro’s heart-stopping sense of helplessness as she realizes there’s nowhere to hide. Then her body starts turning invisible.

What’s striking about Spirited Away is the ordinariness in the way it opens and closes, how it hides its wondrous realm in the cloak of the quotidian.

Lest you think it’s all gloom and doom, the story that follows falls on the no-nonsense side of kindhearted whimsy. Chihiro meets her first ally seconds later: Haku (Miyu Irino/Jason Marsden) looks like a teenage boy but he shows off a dizzying array of special abilities that suggest there’s a lot more to him than meets the eye. She can’t be an intruder if she finds work at this sauna for spirits, Haku tells the frightened new arrival, and he sets her on a path that leads to a one-on-one job interview with the big boss: the witch Yubaba (Mari Natsuki/Suzanne Pleshette). The character is a triumph of animation: impeccably coiffed gray hair, grotesquely jumbo-sized head and even larger nose. She’s more terrifying than intimidating — as Chihiro, who displays a resolve she didn’t know she has, soon discovers.

Regardless of the surface similarities these moments may share with Western children’s literature, ancient Japanese folklore and Miyazaki’s own past work, there’s a bracing sense of discovery to them. A child’s quest to find inner strength in order to confront daunting challenges is an integral element in fairy tales, and yes, Spirited Away ticks off the requisite boxes. And yet, the notion that you’ve never seen that story told in quite this way is pretty inescapable. No, you have not seen this movie before.

That remains true whether it’s your first or your fifth viewing. Miyazaki’s eighth feature, made after his ambitious (and more adult-themed) 1997 epic Princess Mononoke, is the gift that keeps on giving. It retains some of Mononoke‘s god-themed scope but ties it back to films like My Neighbor Totoro and Kiki’s Delivery Service, the ones that earned him the nickname the Japanese Walt Disney. It’s a field day for animation enthusiasts, in large part for its character’s nuanced facial expressions. Yubaba, with her wild saucer eyes and ability to abruptly glide from one side of the room until she’s right in your face, is a clear MVP here, though the giant baby she keeps hidden away, with his propensity for throwing temper tantrums, is a close second. But their eclectic richness is on ample display everywhere, down to to the design of the most incidental employee or clients at the bathhouse.

There are so many moving parts here, from both a thematic and technical point of view, that pinpointing what makes Spirited Away stand out from an already outstanding body of work becomes as challenging as a meeting with Yubaba. But I think it comes down to an ability to deal with heady, complex subject matter from a 10-year-old’s perspective without diluting or lessening its resonance. Miyazaki has made a loopy, demanding work of art that asks your inner child to come out and play. There are few high-wire acts in all of moviedom as satisfying as that. 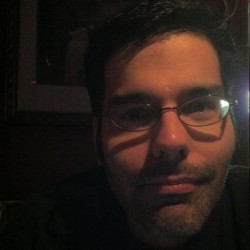 Latest posts by Rubén Rosario (see all)
Liked it? Take a second to support The Spool on Patreon!