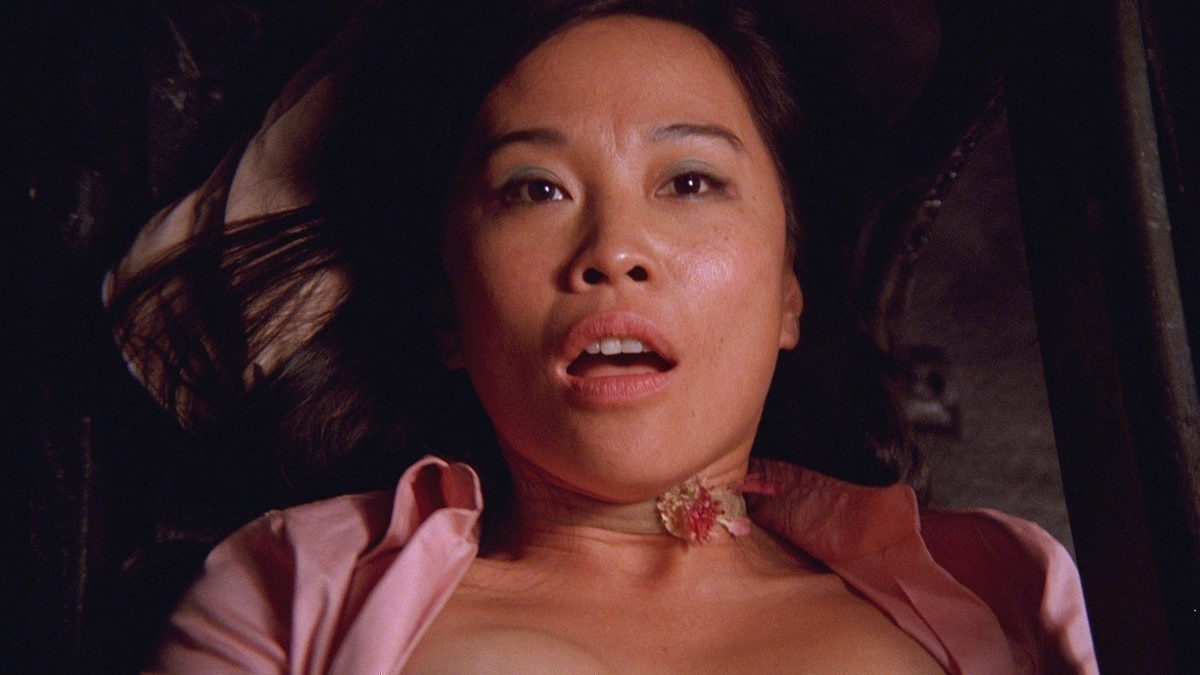 The director talks about his cult film’s 4k restoration, how it reflects the culture now and then, and the possibility of a return to live theatre.

In 2006, John Cameron Mitchell’s second feature film Shortbus debuted at Cannes. It told the story of a salon in New York City where a collection of people gathered to make art and connect with one another. While critics were typically enthusiastic about the film, much of the conversation surrounding it concerned several scenes involving unsimulated sex.

Now Oscilloscope has put Shortbus back in theaters with a 4K restoration to coincide with the 15th Anniversary of its Cannes Film Festival premiere. In honor of the occasion, we sat down with Mitchell to talk about its boundary-pushing sex scenes, whether it could be made today, and whether all of those on-screen orgasms were, in fact, real.

This interview has been edited for length and clarity.

Obviously, humans enjoy anniversaries in multiples of five, so that’s part of the reason for this re-release; but when I re-watched Shortbus, I thought about the political climate that it was made in. The Bush Era and 9/11, along with the culture wars over sexuality. We seem to be in a similar situation with our very divisive political climate, and we again find sex and gender – especially for trans and gender non-conforming people – as part of the culture war. How do you think Shortbus speaks to today’s climate?

JOHN CAMERON MITCHELL: You know, I feel like there were a few films back in the early ’00s and late ’90s that used explicit sex (often from France, Mexico, and Britain) that were interesting. The only one I really liked was Fat Girl, which was by Catherine Breillat, which was harrowing but beautiful. But they tended to be very grim; the sex was always connected to trauma. And it was boring, and sex can be all those things.

Sex is not inherently interesting, it’s neutral. It’s like music, you can do things with it, in life and in art. And I wanted my New York film – I wouldn’t say Woody Allen, but my Albert Brooks version of it. A little feeling of Everything You Wanted to Know About Sex. My role model was the German film Taxi Zum Klo from around 1980/1981, which was somewhat autobiographical. It was funny, it was melancholy, it used explicit sex, it was touching. That was more the model. A touch of Harold and Maude too.

So it’s a cartoon, a fairy tale, of a New York that I moved in and moved around in. I was inspired by a New York that’s not really there anymore, affected by 9/11. Pre-iPhone. The blackout was a real thing and felt the way it felt in the film. Beautiful and exciting. We were alive suddenly, there was no violence. I wanted to capture that moment, that felt, as Justin Bond says, “just like the ’60s but with less hope.” There’s a panic in the air, but there’s a love too.

Today, the panic about sex seems to come from the left. The idea that if someone is having sex, they’re being exploited. Which feels like a little hangover from the #metoo and consent stuff. Imagine the intimacy counselors required today for Shortbus! I just did Joe Exotic and the intimacy counselor was like, “Is it okay if he puts his hand on your shoulder?” And I’m like, “My shoulder? In Shortbus, someone had an arm up to their shoulder inside somebody.” It’s hilarious.

And there’s a sense of finding community in [Shortbus] that feels even more necessary today. I love getting people together. Hiding behind screens has led to so much polarization, the woke panic, and the cancellation panic because we aren’t seeing each other’s faces. We aren’t hearing the tone of voice when we’re saying the words. We’re not seeing context. And we’re judging from the hip, and we start to reject people without even knowing them. And that’s all kinds of people. I think of this as a corrective. In it, I kind of invented Grindr.

I was going to say, you talk about the screens today and Shortbus presages this with people filming themselves all the time and the “yenta bot,” which is freaking hilarious.

MITCHELL: I saw that technology happening, and thought, “It looks like this is going to happen, let’s use it [in Shortbus],” but also you can see [Shortbus’s] also a little bit Luddite. Technology always fails in this film. The light goes out. It’s in failure that people meet and interact, in the dark perhaps. The Yenta gives a guy’s pacemaker a jolt, and Ceth ends up meeting the mayor of New York and having a beautiful interaction. An intergenerational remembering of AIDS and talking about what’s different today.

But I feel today the pushback would come more from the left. I’m a cis, gay, white man shooting an Asian woman having an orgasm. “That’s not my life to tell!” might be the refrain. But, I’ll tell you, I relate to all those characters, and I have faked an orgasm or two.

I think we all have.

MITCHELL: And the male gaze works for the gay males. It’s a problem for gay males too.

Hedwig is very theatrical, glam rock – as it would be, it started off as a play. Shortbus is much more naturalistic, almost documentary-like. How different was it making these very like different movies? Was that a big shift for you directorially?

MITCHELL: Directing Hedwig was not as fun as directing Shortbus. I was in it, and there was too much going on, and I was learning too much, and it was stress. The times I had the most fun were directing the actors in scenes I wasn’t in. Shortbus, I took what I learned from that, and how to guide the actors into paraphrasing.

For Shortbus, I told the actors I’d fire them if they learned the lines as written. Because the super experienced and super inexperienced actors were in the same film, they only started to melt together when they could paraphrase their lines. Not the same as improv, though we did have some improv. We developed it through improv. I wrote a script, and then I said “you have to do those lines, but they have to be different and in your own words every take.” So that gave me great pleasure.

I was able to find people who were able to do that, who may not have been able to do verbatim stuff. But they were naturals at the paraphrasing and the looseness. So I was using techniques I had adapted from Mike Leigh, Robert Altman, John Cassavetes, some of my favorite filmmakers, into a form that really could use.

A lot of non-professional actors I was seeking out because they were less panicked about sex. A lot of stars don’t want to have real sex. God knows if they have it in their own lives. So I inoculated myself against having name actors by having sex. And name actors are a pain in the ass because you have to work around their schedule and their agents, drivers, massage therapists. So it was a very down, dirty, but loving set. Since then, all the actors and crew said it was their favorite experience. I was the intimacy counselor. Everyone was the intimacy counselor then. But today you can imagine SAG not allowing me to do it.

People aren’t even going into movie theaters now. I’m moving into television, podcasts, and theater. If I don’t make another film it would be sad but the small film is out of vogue right now. But I love that this 90-minute short story called Shortbus still resonates. And the excitement is there for the rerelease. Most people will see it again on Blu-Ray or streaming rather than in the theater, but I love getting people together in the same room.

When I would do screenings, I would sometimes do a “drunk directors commentary” for Shortbus. I’d slowly get drunk and talk through the film. And whenever there was an orgasm I encourage people to throw their popcorn. There is one fake orgasm, and I mean fake by the actor, not the character. All the other orgasms are real unless they’re designated fake. I’d have a contest for who can spot the fake orgasm and they get a prize.

Now I’m curious if I can guess which one. I guess my thought would be one of the opening scenes with Severin and the trust fund kid.

MITCHELL: No, he’s hitting that painting.

My respect for him goes through the roof.

MITCHELL: Well you see it happening in that shot, there’s no digital in this film.

You got started in theater, have you thought about going back to do more live theater?

MITCHELL: Oh yeah, in effect I’ve been on tour. I did it at the Athenaeum actually, a show called Origin of Love which is a memoir show where I tell the story of making Hedwig. And it was theatrical, we had projections and costumes and things. But definitely. Obviously, the theater has taken more of a hit than any art form in COVID. But definitely. My last big project was Anthem Homunculus, which was a podcast musical series that I originally thought of for stage. But it was a large story, and we could very well bring that to the stage in a slim downed form.

Or Shortbus. I wouldn’t mind if people made Shortbus into a musical. In the ’60s people did have real sex on stage. Wouldn’t it be nice for that to come back?

Do you still keep in contact with any of the performers still?

MITCHELL: Of course, we’re all very close. The people I haven’t talked to much are the person who played Severin, who’s in Boston and actually teaches acting at Emerson College, and Raphael Barker, the husband character, he’s been a little incommunicado. Not sure where he is, he has kids now. I’m very close to Suk-Yin who plays Sophia, Paul, and PJ, who remain a couple, they’ve been a couple for 17 years. And Peter Stickles, who’s the stalker, Justin Bond for sure. Allen Mendel who plays the mayor. Bitch who plays herself. A lot of these people I’m very close to. And I run into a sextra every once in a while. And of course, I still work with the same behind-the-scenes people, producers and DPs and everything.

Any chance you might go on tour to do that drunken director’s commentary for Shortbus? There is no scheduled screening for Chicago and I’d love to see that in person.

MITCHELL: I’d like to. What would be the right theater in Chicago to do a run of it?

MITCHELL: The Music Box is still going? Is the Fine Arts still there? I remember seeing Cassavetes for the first time there.

I would really love to, I’ve been touring around different cities piecemeal. So it’ll be more when they want to when they can. I’m doing Portland, ME; Portland, OR; Jacksonville, New Orleans. So I’ll definitely be coming to Chicago at some point.

The 4k restoration of Shortbus is currently playing in select cities.