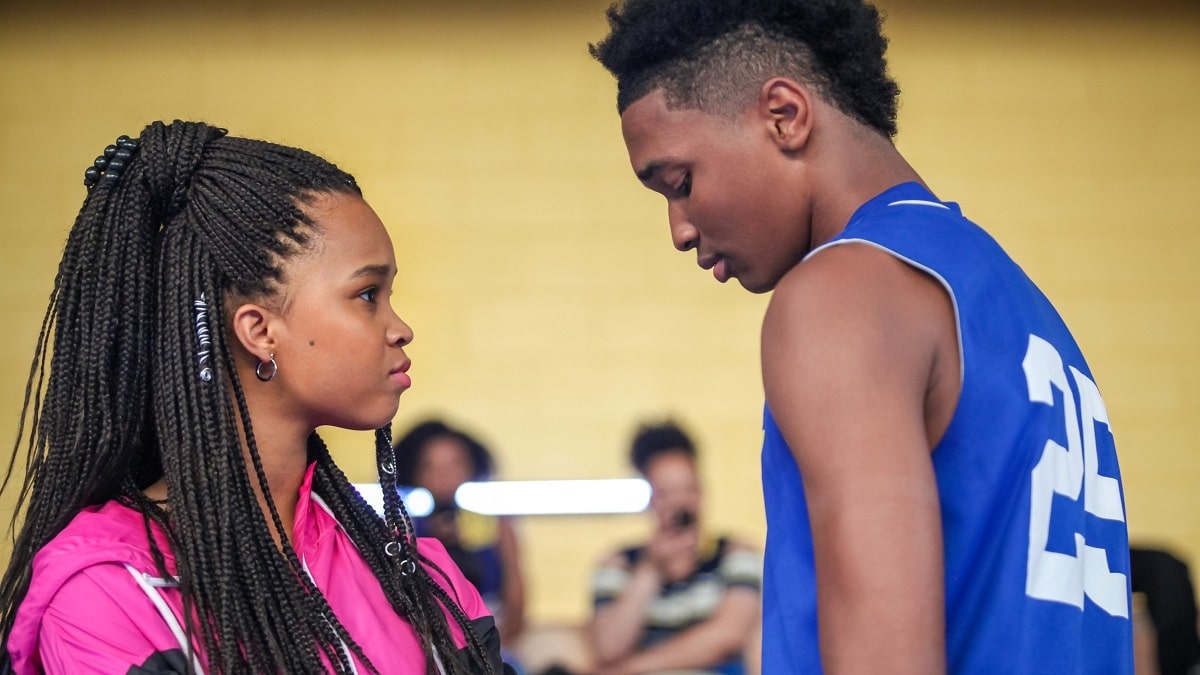 Sports and sports-related entertainment is not a topic I’m especially well versed in, so color me surprised that I enjoyed Apple TV’s Swagger as much as I did. Produced by NBA superstar Kevin Durant, the series is loosely based on his own life and struggles coming up in the sport. Swagger spends as much time off the court as on, as we follow the life lessons of young Jace Carson (newcomer Isaiah R. Hill).

At fourteen years old, talented, driven Jace is already training like a pro, running five miles every morning before school. His single mom Jenna (Shinelle Azoroh) has invested as much, if not more, in his pursuit. It’s reached the point that her tiger mom tendencies sometimes overshadowing her love for her children. Her search for a team that will make Jace’s star shine brighter leads her to team Swager. When Jace joins, the pieces begin to fall into place. Swagger’s head coach, Ike (O’Shea Jackson Jr.) sees the potential for greatness in Jace. Not only as a player, but as a person.

While there is a lot of messaging in Swagger, none of it feels forced or false. It is a little heavy-handed at times, dealing with issues like child neglect and abuse, child exploitation, and today’s racially charged atmosphere. But for all of that, Swagger never suffers for its after-school special vibes. There’s an edge to these messages; a knowledge that the transition from childhood to adulthood carries with it some harsh pains and realities. Jace, his teammates, and his best friend/girlfriend Crystal (Quvenzhané Wallis) all have to come to terms with the fact that sometimes, life is no cat and no cradle.

Despite its name, Swagger takes a refreshingly healthy attitude towards emotional vulnerability in young men, some of whom live in circumstances not so much adverse as deplorable. One such team member, Phil (Solomon Irama) has a home life no one would envy. He could easily have turned out to be the team bully. Under coach Ike’s leadership and care, though, he learns not only how to express himself honestly, but also how to say, “I deserve respect.”

While Jace and team Swagger are the main focus, there are still some weighty moments for other characters. Crystal faces an entirely different kind of danger from her coach than the exploitation for profile and profit Jace encounters. In these scenes, Wallis does some pretty heavy emotional lifting as Crystal’s storyline carries the most weight and consequence.

If you’re tuning in for some Ted Lasso-style happy escapism, this might not be the show. Yes, Swagger is empowering and uplifting, but it also fully acknowledges the pandemic and how Covid-19 changed our lives. Unfortunately, the hits don’t stop there, as 2020 rolls in halfway through to become the series’ real villain. The killings of Breonna Taylor, Ahmaud Arbery, and George Floyd are all recognized, as are the subsequent protests. In a scene choked with tension and fear, the team even encounters trigger-happy cops. They’re looking for an excuse to draw their guns even as the players are doing nothing more than enjoying a pre-game meal in a diner. These are the hard lessons, the harsh realities that Jace and his team face. The same harsh realities that face BIPOC outside the television screen every day.

Ike, who has lived enough to understand how quickly the world seems poised to snuff out young Black lives, tries to impart the lesson that sometimes, being right isn’t worth your life. It’s a sobering moment to see these young people, these children realizing how harsh, how dangerous the world can be.

Swagger offers up a lot to love, but it’s the performances of O’Shea Jackson Jr. and Quvenzhané Wallis that carry the show from good to great. Jackson, in particular, stands out. He inhabits the expectant father and husband trying his best to make ends meet while still being available for the kids on his team. Ike always seems to be teetering on the edge of emotional and mental burnout, but never succumbs to bitterness. There’s a sizable chip on his shoulder about his fall from grace as an almost was. Nonetheless, he’s a man who is comfortable with his own humility. With Jace, Ike has his work cut out for him in scaling back a sizable (if warranted) ego. Despite his weariness, he’s up for the challenge.

Swagger takes a fairly unvarnished look at the ugly side of sports, the blood, sweat, and tears from the players and the machinations of an industry that all too often abuses the athletes who make their money for them. Still, it also captures the joy of the game, the camaraderie, and the comfort that comes with being on a team. It shows the sport for what it really is: a labor of love.

Swagger laces up its sneakers for AppleTV+ on October 29th.