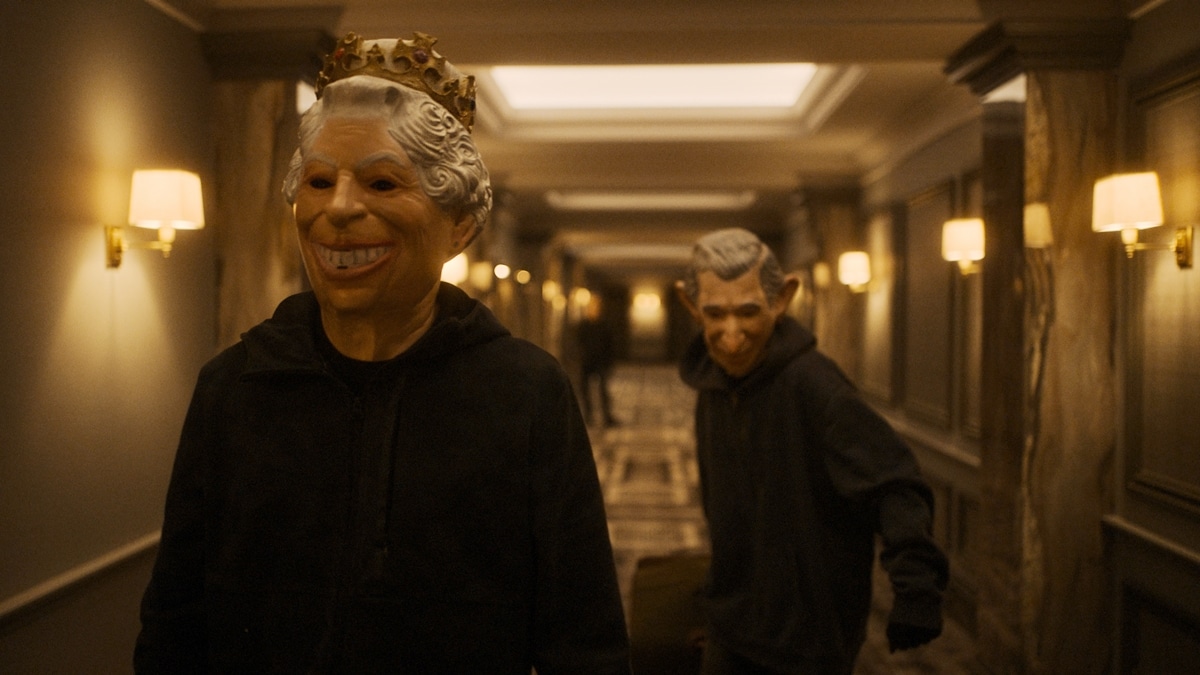 Throughout Suspicion, Rob Williams’s English language adaptation of False Flag, teases of revelations and insights dangle in front of the audience. These remain teases. Even when the show’s final twist hits, it reveals new information without deepening our understanding of the characters.

And that’s a lot of characters to get only the shallowest reads.

It all starts with the abduction of Leo Newman (Gerran Howell). His wealthy PR maven mother Katherine Newman (Uma Thurman)is only days away from the nomination for America’s Ambassador to England. Suddenly, he’s grabbed out of a New York hotel by people dressed as the Royal Family. The next time anyone will see him is bruised, bleeding, and tied up. The only other information about what’s happening is a slogan, “Tell the Truth,” released during the pirated broadcast.

British citizens Tara McAllister (Elizabeth Henstridge), Natalie Thompson (Georgina Campbell), and Aadesh Chopra (Kunal Nayyar) are all staying in the same hotel. Eddie Walker (Tom Rhys Harries), a college student on holiday, was partying nearby. The connections seem tenuous at first. The chances that they were the only Brits in the Big Apple feels highly unlikely. Nonetheless, with little else to go on, Detective Vanessa Okoye (Angel Coulby) rounds them up.

She’s joined by Scott Anderson (Noah Emmerich), an American FBI agent none too secretly carrying out Newman’s whims. As a result, he immediately treats the quartet as players in a criminal conspiracy. Moreover, they’re collaborating with gun for hire/suspected terrorist Sean Tilson (Elyes Gabel). The accused insist that isn’t the case. With no one able to prove or disprove anything, the police release the quartet, hoping they’ll reveal their guilt.

Suspicion is a show consistently filled with incident it can sometimes trick you into thinking it is complex.

If that sounds like a lot, it honestly really only covers the first two episodes. Suspicion is a show consistently filled with incident it can sometimes trick you into thinking it is complex. It has complications, for sure, but there’s no substance to it. It’s like being told a story by a friend with incredible recollection for details and zero memory for names or emotions.

Part of the problem is the show seems profoundly disconnected from the political tone of the time. A significant driver of the plot—only revealed in the series final 90 or so minutes—hinges on the reveal of some long-buried scientific truth. Unfortunately, we’ve had a multi-year course in how many people react to scientific information. Suspicion seems unaware of how they can and will ignore scientific data that disproves their existing beliefs.

Similarly, the show’s perspective on international relations seems odd. For example, when was the last time America’s ambassador to the UK was a position that mattered even a little? When had it ever acted as a ticket to immeasurable political influence? Don’t Look Up’s business about the Supreme Court nominee felt more in line with the present reality of political power.

At other times, Suspicion has an ugly cynicism. Its attitude towards activism is a mix of condescending and doomsaying. No one ever says “terminal wokeness,” but it always seems just a moment or two away from happening. The “Tell the Truth” fervor seems especially bizarre. For several episodes, people seem to be shouting for it while seemingly having no idea what the slogan means.

Still, characters worthy of empathy can forgive all manner of sin. Unfortunately, nearly all the leads get only the briefest of sketches. We learn more about them, but somehow none of the revelations deepen their character. By the end who lives, who dies, and who gets away earns little more than a shrug of indifference. Only one character’s fate earns a wince. However, that’s more about the strange way the show makes them a punching bag as if telling viewers, “this is the biggest sinner.”

The look of the series, directed by Chris Long and Stefan Schwartz has a similar slick but hollow feel. Well-crafted images can’t overcome desaturated colors that quickly wear thin. Visually the series does its best work with the suspects stuck in a closed-up home in the English countryside. It gives viewers a break from repetitive feeling city shots and introduces a different palette. Additionally, the tight quarters provide a sense of tension that often feels strangely lacking.

Taken in total, Suspicion provides the most frustrating of viewing experiences. A well-acted, well-shot show that nonetheless lacks emotional or contemporary resonance.

Suspicion is dodging the authorities now on AppleTV+.