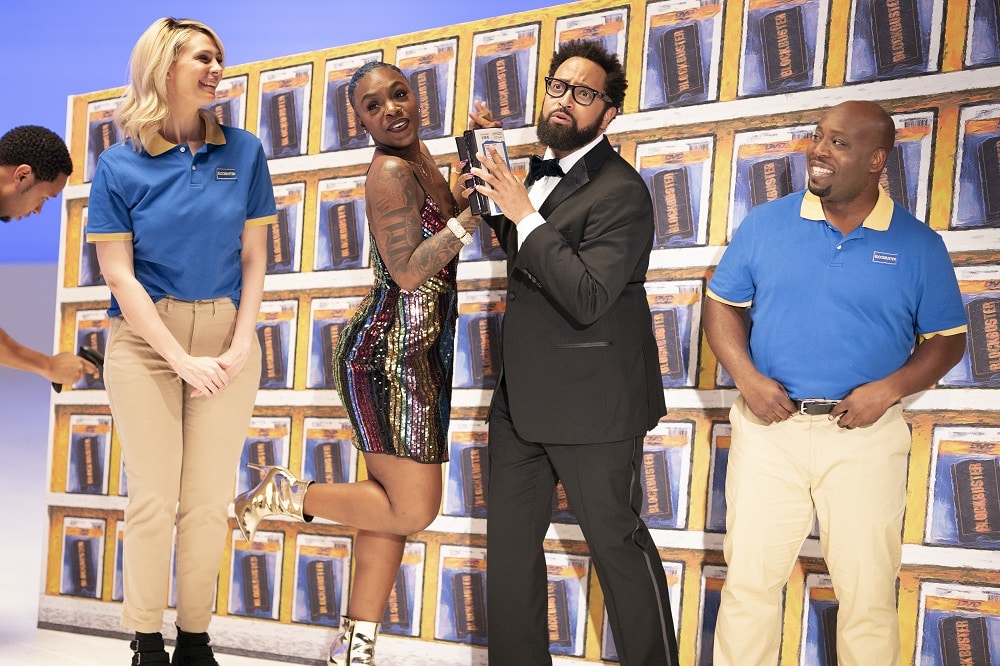 IFC’s uproarious variety show-within-a-documentary is a groovy slice of ’70s ephemera, as smart as it is strange.

Well, ok, that’s not literally true. But that is certainly what Sherman’s Showcase wants you to think when you encounter its alternate universe.

Sherman McDaniels (Bashir Salahuddin), a gravelly-voiced host who appears both untouchable and a buffoon — often at the same time — has MC’d his show since the ’70s. To believe him, that’s the last time pop culture was any good. It is a viewpoint that the seems to have encased McDaniels and his supporting players in a kind of time bubble. No one seems to have aged over the course of Showcase’s time on the air and neither the show structure nor the décor has seen fit to update itself. On the other hand, the modern intrudes via guest stars — a soup sipping Tiffany Haddish, true fan/host of documentary segments John Legend – technology, and music’s steady evolution.

Creating further time confusion is that Showcase unfolds alongside certain themes — segments focus on the dancers, on Sherman himself, on failed attempts at creating new bits — but not chronologically. Therefore, characters that have explicitly been mentioned as dead or relationships that have ended pop up seemingly reborn. This, coupled with the aforementioned agelessness, creates this strange, delightful sense of disconnect. You hear of the Human Crayon’s death at one moment, then realize you met his robot double two scenes earlier. Then they both show up randomly in different segments later, each appearance further confounding your sense of linear time.

That probably sounds a bit hyperbolic, but Showcase definitely aims to disorient. It wants to make you laugh — and frequently does — but even more than that, it wants to sell the bit. Sherman’s Showcase is real, it has always been real, and to paraphrase McDaniels, if you didn’t know that’s because you’re racist.

The more Showcase’s reality ensnares you, the more depth the show takes on.

In the name of selling the bit, one has to mention the music. Each song is dead-on period-appropriate. More impressive, however, is how the songs function as both a listenable example of the form and parody. Leaning too far in one direction in the other would pierce the “reality” of Showcase. That may be the only thing the show refuses to do.

Not everything Showcase tries is successful. In particular, the show’s false commercials seem to have the lowest hit to miss ratio, germs of ideas that never really blossom. However, it still seems to work. For one, Showcase moves so quickly and tosses so much out there that a missed punchline or a failed bit never lingers long enough to ruin the vibe. For another, we know from context that Showcase itself is not exactly quality programming. The set dressing is budget, McDaniels is a corner cutter with limited interest in paying his co-workers well, and the show just as often scares off its guests as lands them. Having a few blunders only makes sense.

Again, that all returns to the Sherman’s Showcase stone-faced commitment. Every set, every angle and camera move, every earnest talking head is meant to further the sense you are being exposed to a cultural institute you somehow missed. The better the fakery, the better the jokes land.

Moreover, the more Showcase’s reality ensnares you, the more depth the show takes on. You laugh at the jokes, for certain, but the real fun begins two or three episodes in when you begin to notice the connections and relationships that would build over the course of over four decades of working together. Any one episode will give you the giggles, but all eight taken as a whole makes Showcase an inspired piece of work.