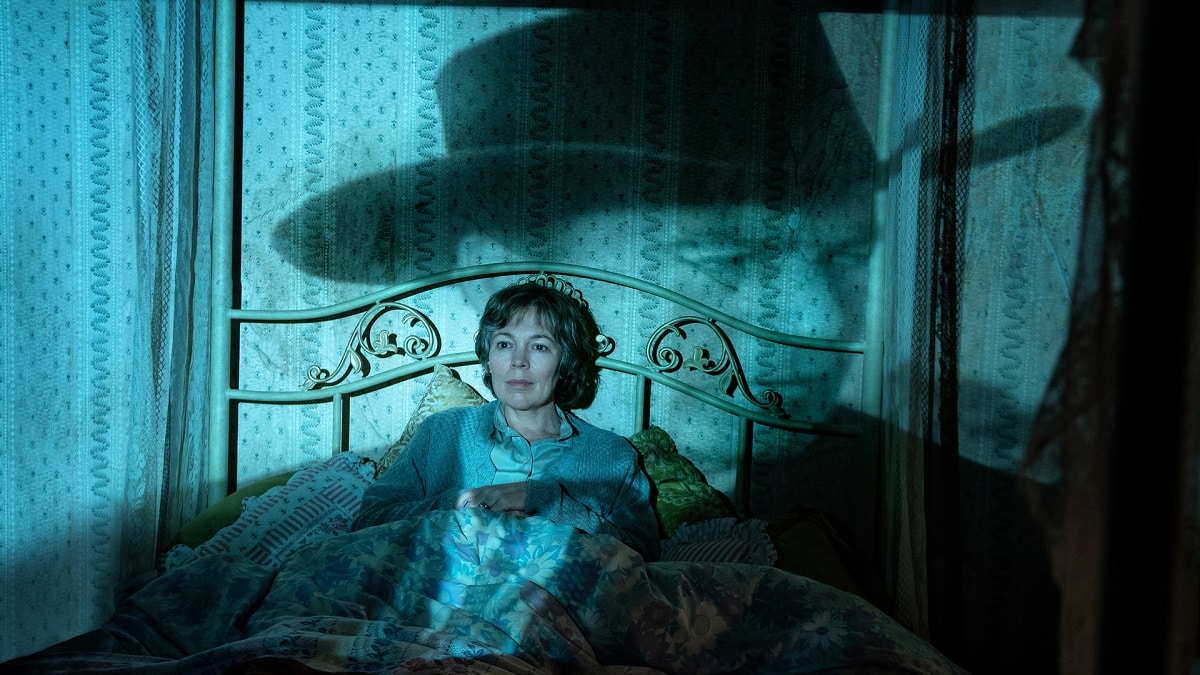 There’s a sort of inflationary issue in the True Crime genre these days. This presents an immediate hurdle to HBO’s new “based on a true story” limited series Landscapers.

Having come into full flush via podcast, documentary films, documentary limited series, docudramas, and more, the sort of crime one needs to stick out from the crowd has grown considerably. It is not enough to tell the story of, say, a spouse murdering the other spouse. Now one needs to have doubts, conspiracies, possible owl involvement, the possibility of several other victims—something to give the whole thing a heavier note of the sensational.

The true story of Susan (Olivia Colman) and Christopher (David Thewlis) Edwards lacks that kind of hook. Their crime—killing her parents and hiding the bodies in the parents’ yard for 15 years–certainly shock and disturb. However, everything from Christopher’s accidental confession to his stepmother through the couples’ airtight story falling to pieces under police interrogation led by actor Kate O’Flynn’s smart, unshakeable police detective, to, finally, their conviction feels, well, predictable. It’s a bit cynical and perhaps grisly to say, but everyone’s competent professional robs the series of dramatic juice.

Instead, the series draws its energy from a few of the real-life crimes’ more idiosyncratic details. Specifically, the couple’s extensive collection of Hollywood memorabilia, driven evidently, by Susan’s great love of the films of the ’40s and ’50s. Westerns, in particular, seemed to capture her attention. In Landscapers, her interest becomes something more.

Colman plays Susan as a dreamer who always feels a step or two out of sync with her reality. Colman and the script portray her as almost delusional despite several details suggesting a certain craftiness—concealing massive debts, a false correspondence with a celebrity, possibly creating a tale of parental cruelty. By the end of the show, her disconnect from reality has grown to intense levels. She seems to be experiencing the entirety of her trial as though she is living a technicolor western.

Thewlis’s Christopher seems tethered to the real world. In Susan’s fantasy, though, he fits the archetype of the hero well. Caught in slow motion black and white or awash in the too vibrant hues of the early color era, Thewlis somehow gives the normally gaunt, tired Christopher the bearing of a classic hero. As Susan sinks deeper into her fantasies, he adapts well to the parlance and rhythms of Western dialogue.

No True Crime series looks or sounds like this one.

Even better is how other characters interact with Susan’s delusions when not part of the “cast.” We see the excavation of her parents’ backyard in “real life” and depicted as the striking of a set. We watch police take Susan “behind the scenes” of her delusions to rehearse her parents’ murders before they roll camera. Characters double as both actors preparing for a shoot and themselves.

It is these stylistic interpretations and performances that elevate Landscapers. No True Crime series looks or sounds like this one. None has the depth of talent or the intriguing command of the material. The story may seem achingly basic compared to a Duritz or a Staircase. However, the willingness of director Will Sharp and writer Ed Sinclair to foreground the marriage of the two suspected killers over the baser draw of their crimes yield far more interesting material.

There’s one thing to be clear on, though. Despite the marketing referring to the series as a black comedy, it is rarely funny. Daniel Rigby gets the show’s biggest laughs out of his constant foul-mouthed frustration. The man can make the line, “I’m going to get a fucking sandwich!” sing. However, he stops joking about halfway through episode two. After that, there’s basically only a bad Gerard Depardieu imitation and a closing conversation between O’Flynn and her fellow detective Samuel Anderson even looking for laughs.

Landscapers is digging around the yard now on HBO.