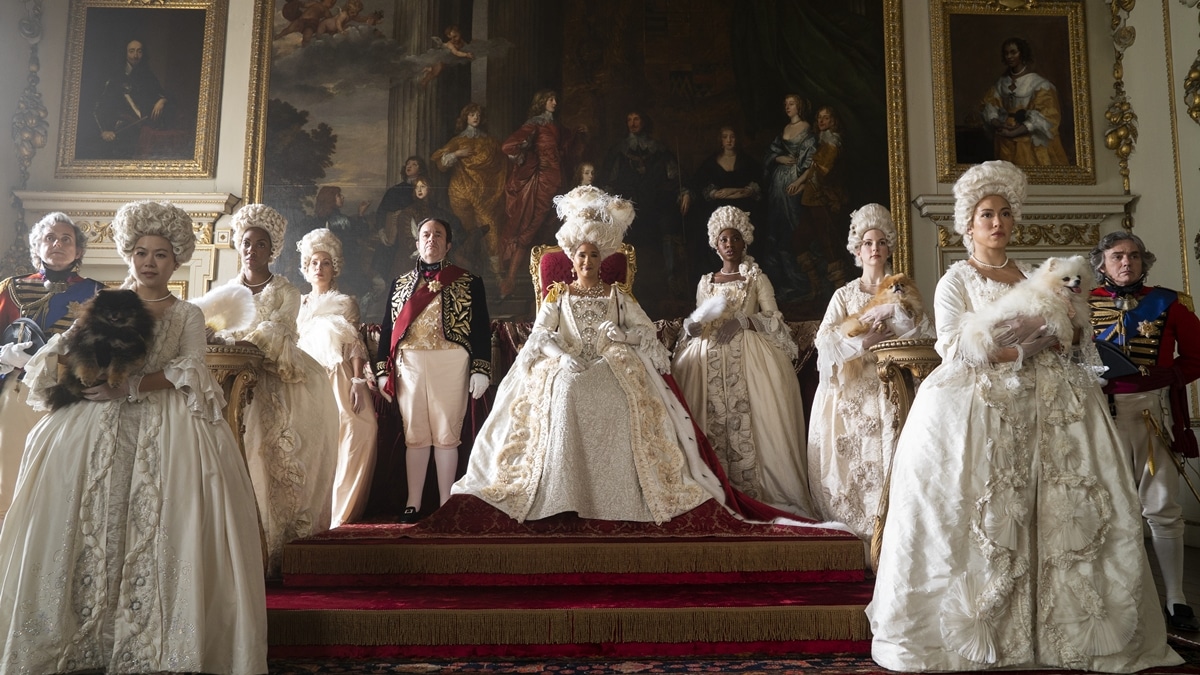 Bridgerton is back this week, and yes, there will be bodices ripped, smelling salts fetched, and pearls definitely clutched. But before getting into all of that, let’s do a little housekeeping. While you’re not going to find a bigger romance fan than this reviewer, that doesn’t mean this review will overlook Netflix using actors of color to bolster what are mainly white characters and storylines.

If studios were serious about telling stories not framed around whiteness, they would be adapting properties from actual authors of color like Beverley Jenkins, Alyssa Cole, Alisha Rai, Talia Hibbert, Sherry Thomas, and Rebekah Weatherspoon. While I can sit here all day long and talk about how refreshing it is to see love stories centered around nonwhite characters–and it is!–there’s further to go. Stories wherein the white characters are a minority–or aren’t present at all–are also vitally important.

This doesn’t mean that viewers can’t enjoy Bridgerton for what it is. However, it is also essential to listen and try to understand critical voices. For example, Shaun Armstead’s piece Blackness, Dehumanized: A Black Feminist Analysis of ‘Bridgerton.’ As I said in my review of season one, Bridgerton takes steps in the right direction. Still, we have a long way to go.

All that being said… Holy smokes! What a season! Disappointment awaits thirsty viewers tuning in for a glimpse of Rege-Jean Page. However, season 2 still brings plenty of heat with the addition of Sex Education’s Simone Ashley as Kate Sharma.

The second of Julia Quinn’s Bridgerton series focuses on eldest son Anthony’s (Jonathan Bailey) misadventures in the marriage market. The Viscount Who Loved Me is Quinn’s clever take on Taming of the Shrew, with reformed/reforming rake Anthony as our Petruchio and Ashley’s Kate as our Katherine. If you fell hard for Simon Basset and his spoon, get ready to go head over heels for Kate. She’s an outsider in London Society trying to ensure a successful match for younger sister Edwina (the lovely Charithra Chandran).

Queen Charlotte (Golda Rosheuvel), hoping for an “interesting” season, named young Edwina as the season’s “diamond of the first water”. That’s enough for Viscount Bridgerton who feels he deserves the best and nothing less. The only problem is Edwina’s sister is dead set against the match from the beginning. Further complicating the matter is Anthony’s undeniable attraction to the thorny spitfire Kate.

At twenty-six, Kate is already considered a spinster by bon ton rules. Still, that doesn’t stop her and the Viscount from setting fires wherever they go. Knowing derision from his brothers Benedict (Luke Thompson) and Colin (Luke Newton) and concerned, knowing looks from sister Daphne (Phoebe Dynevor) meet Anthony’s constant frustration at Kate’s meddling. The conflicted attraction to Kate is so apparent, the looks so smoldering, it’s incredible that his mother, Lady Violet (Ruth Gemmell), and Kate’s sponsor Lady Danbury (Adjoa Andoh), don’t notice. In fact, it’s a bit of a miracle Kate isn’t bursting into flames every time she gets within spitting distance of Viscount.

Society is not the only complication in Anthony’s pursuit of Edwina. Witnessing Lady Violet’s anguish after the death of the late Viscount (played by Rupert Evans in flashbacks) has left Anthony terrified of love. The peeks into the early days of grief after the death are absolutely harrowing. As a result, contractual marriage seems the path for him. However, Daphne and Violet try to make Anthony see that such a thing wouldn’t be fair to his future Viscountess.

For all its sexy delights, Season 1 is much shakier than this more confident and more restrained second season.

For her part, Kate is wary of Anthony, but is wise enough to recognize how well they mesh. She understands how intoxicating it can be to just vibe on an intellectual, emotional, and physical level with someone. Her determination to do what is best for her sister makes her a bit of a martyr, but as Lady Danbury says, “you can’t resign yourself to happy spinsterhood when you haven’t even lived.”

While the Viscount is busy with his complicated feelings on love, marriage, and legacy, Eloise (Claudia Jessie) is dealing with her own entry into the marriage market. Not satisfied with the tedium of domestic life, Eloise has yet to learn that the cerebral and the physical are not mutually exclusive.

This season her antics land her directly in her Majesty’s crosshairs as a potential Lady Whistledown. Meanwhile, Eloise’s BFF, Penelope Featherington (Nicola Coughlan), continues trying to keep her friendship with Eloise and her secret identity as the genuine Lady Whisteldown intact. Penelope is often the only character in Bridgerton who sees things clearly. For instance, how dangerous it could be for Eloise to begin a flirtation with a working-class intellectual. Or how Colin’s (Luke Newton) concern for his cousin Marina could do more harm than good in her new situation as a wife and mother. While Penelope’s intentions are primarily pure, there are some significant consequences she will have to face should her nom de plume ever be discovered.

Undoubtedly, the one-two punch of no Simon Basset and much less on-screen sex this season will frustrate fans. Still, those looking for exquisite costumes and smoldering slow burns are in luck. For all its sexy delights, Season 1 is much shakier than this more confident and more restrained second season. Thankfully, there isn’t so much as a whiff of dubious consent. It’s an absolute joy to see the chemistry between Bailey and Ashley as the season unfolds. Patient viewers are in for some wonderfully toe-curling moments.

Bridgerton Season 2 rings the bell on the marriage market starting March 25 on Netflix.