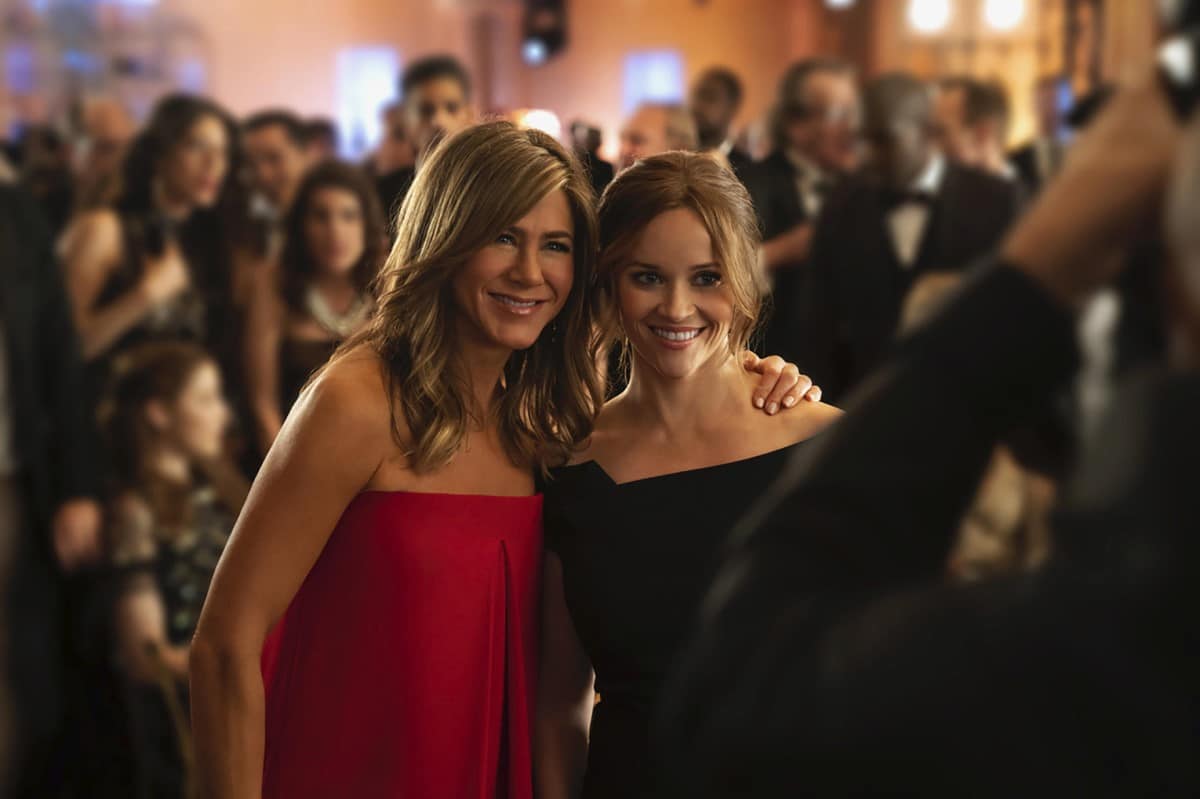 Sunday’s New York Times featured an op-ed from none other than Mark Zuckerberg, insisting that Facebook’s curious insistence on treating websites with names like hillarydid911.freedomguns.biz as legitimate news sources is helping to improve journalism. It’s sobering to realize how, in less than twenty years, journalism has become less about reporting the news and more about constantly remaking itself, chasing clicks instead of stories. The time is ripe for a TV show depicting how the news industry, both print and television, has been impacted by social media, and gullible Americans getting their information from dubious sources whose only credentials are having a lot of followers on Twitter.

The Morning Show, however, is not that show.

One of several prestige shows debuting on Apple+ this week, The Morning Show boasts an all-star cast headlined by Jennifer Aniston and Reese Witherspoon, and glossy, cable-level production values. It looks great, though considering it cost an astonishing $150 million to produce, it darn well should look great. Unfortunately, all that talent and money is wasted on some of the clumsiest television writing you’re likely to see this year. While the writers clearly believe they have something very important to say about both journalistic integrity, and men vs. women, it’s sloppy and inconsistent, with some groan-out-loud worthy dialogue, mostly spoken by Steven Carell, saddled with playing possibly the worst television character of 2019.

“Fake news,” #metoo, and the concept of someone “going viral” are all squeezed into the first twenty minutes of the premiere episode, with all the precision of a toddler hammering a star-shaped peg into a heart-shaped hole. The Morning Show is the kind of show in which character exposition comes by way of contrived dialogue, like “I’m a liberal Harvard graduate who cut his hair for this job,” “Sarah, the world’s only conservative lesbian?” and “She’s fucking funny, but also resonates some truth.” Many of the characters’ motives, if not their entire personalities, seem to change from one episode to the next, as if they were still being workshopped while the scripts were being written. The only thing that’s consistent, at least for the first three episodes available for review, is that these are all awful people, and it’s a hard sell to care about them succeeding at their jobs.

The premiere episode opens with morning news show host Mitch Kessler (Steven Carell) fired for sexual misconduct, putting the future of the show into jeopardy, along with the career of his co-host, Alex Levy (Jennifer Aniston). We never see them working together, so we have to take the writers’ words for it that they were a great team, so close that after the scandal breaks Alex wanders into Mitch’s dressing room and weeps among his clothes, as if he’s died. It’s not just Mitch’s firing that makes the 24 hour news cycle, but also the search for his replacement, as “journalists are left clueless as to who could replace the dad of morning TV.” In a world where there seems to be some new disaster happening every twenty minutes, the idea that this is all anyone can seem to talk about is a bit of a reach.

Meanwhile, local news reporter Bradley Jackson (Reese Witherspoon) is out there trying to be a Serious Journalist (we know this because one of her first lines of dialogue is “Remember the truth? Journalism?”). Bradley works for a conservative news outlet, though she’s quick to mention several times that she’s “not that kind of conservative,” without elaborating what she means or what kind of conservative she actually is. Three episodes in and we get no indication of what Bradley’s political beliefs actually are, which seems like a pretty cheap way for the writers to claim that their show doesn’t have a liberal bias, without offending liberal viewers.

What we do know about Bradley is that she’s very, very mad all the time, and the fact that she accidentally dropped the f-bomb on live television twice somehow renders her unhireable. Evidently the writers never heard of New York news anchor Ernie Anastos, who kept his evening news slot despite telling someone that they should “keep fucking that chicken.”

ANYWAY, Bradley’s clout as a reporter suddenly increases when she goes viral on Twitter after being filmed assaulting and screaming at a counter protester while covering an anti-coal rally. Cory Ellison (Billy Crudup), the craven head of The Morning Show‘s network, who feeds Alex lines about how the network is “a family” while actively seeking to replace her, sees something in Bradley that he thinks might be good to shake up the show, and seeks her out for an interview.

While this is going on, Mitch, in literally the course of a day, loses almost everything that’s important to him, while he’s wallowing in a vat of self-pity. Though Carell gives the role his all, Mitch is an awful, one-note character. It may be a wise decision to not make a sexual harasser sympathetic, but some nuance wouldn’t hurt, or even the slightest thing that would make us understand why Alex staggers around the studio after hours, drinking and crying over the loss of her friend and partner. Instead, he just comes off as an unapologetic creep, refusing to take even so much as a week away before demanding to be able to tell his side of the story.

While it’s nice to see two actresses over 40 leading a television series, it’s a shame it has to be this Newsroom-lite nonsense.

By the second episode, Bradley seems to have been rewritten, her hardscrabble Virginia coal country accent considerably toned down and meek and unsure of herself. I haven’t even gotten into the seemingly dozens of supporting characters, including Mark Duplass as the show’s producer, Gugu Mbatha-Raw as the show’s booker (who talks one of Mitch’s victims into an interview with all the sincerity of a used car salesman), Desean K. Terry as an anchor who desperately wants Mitch’s job, and Nestor Carbonell as the weatherman, who’s also having an affair with his production assistant (Bel Powley). While that relationship appears to be consensual, you can see the wheels turning in her head when he insists that it must remain a secret. Though nobody’s motives for what they do or say are very clear, one thing that’s certain is that they’re all seething with hatred for each other, and it all feels very suffocating after a while.

While it’s nice to see two actresses over 40 leading a television series (and not merely playing someone’s mother or unfuckable wife), it’s a shame it has to be this Newsroom-lite nonsense, in which the question of who’s going to co-host a fluff morning talk show is treated with all the gravity of who’s going to be the next head of cancer research at Cedars-Sinai. The show itself can’t decide if what Alex and the others are doing is “real” news, or just some nonsense that housewives keep on while vacuuming up Eggo crumbs, so why should the audience care what happens to it?

It bears repeating that all of this might go down easier if there was one single character worth caring about. Instead, Mitch and Bradley are patently unlikable, while Alex is such a cipher it’s hard to form an opinion either way on her. Everybody’s sure angry, though, screaming and slamming things around and saying “fuck” a lot and declaring “This is my life we’re talking about here!” For having nothing else going on in their lives but their jobs, they all seem to hate what they do, despite being fabulously rich and famous because of it.

The Morning Show doesn’t have the courage of its own convictions, particularly when it comes to the subject of #metoo. By the third episode, Mitch, despite his best efforts at defending himself, has been abandoned by his family, his lawyer, his agent, his friends, his colleagues, and Alex, his work wife, after being told numerous times that he’s irreparably ruined. It’s an appropriate punishment, except that we know perfectly well that, in real life, notable sex pests and predators like Matt Lauer, Louis CK, and Harvey Weinstein, are never truly abandoned, or destroyed. They may go away for a little while, but they always come back, and they always have vocal supporters demanding that they be given a second chance.

When Alex, while giving a speech on her show about Mitch’s firing, utters the phrase “I am proud to live in a country that upholds consequences,” it’s all the viewer can do from moaning “Oh, come onnnnnnnn” out loud. The Morning Show premieres barely a week after Harvey Weinstein was invited to an event at a New York City bar, and a woman protesting his appearance there was asked to leave. Louis CK has made numerous appearances at comedy clubs across the country, to standing ovations. The current President of the United States (who, curiously, has yet to be mentioned in the show, despite the real danger he poses to the future of journalism) has racked up at least 25 accusations of sexual assault. What “consequences” is Alex talking about here? The writers of The Morning Show would do well to perhaps actually read the news they’re writing about.

The Morning Show rises and shines on Apple+ November 1st.