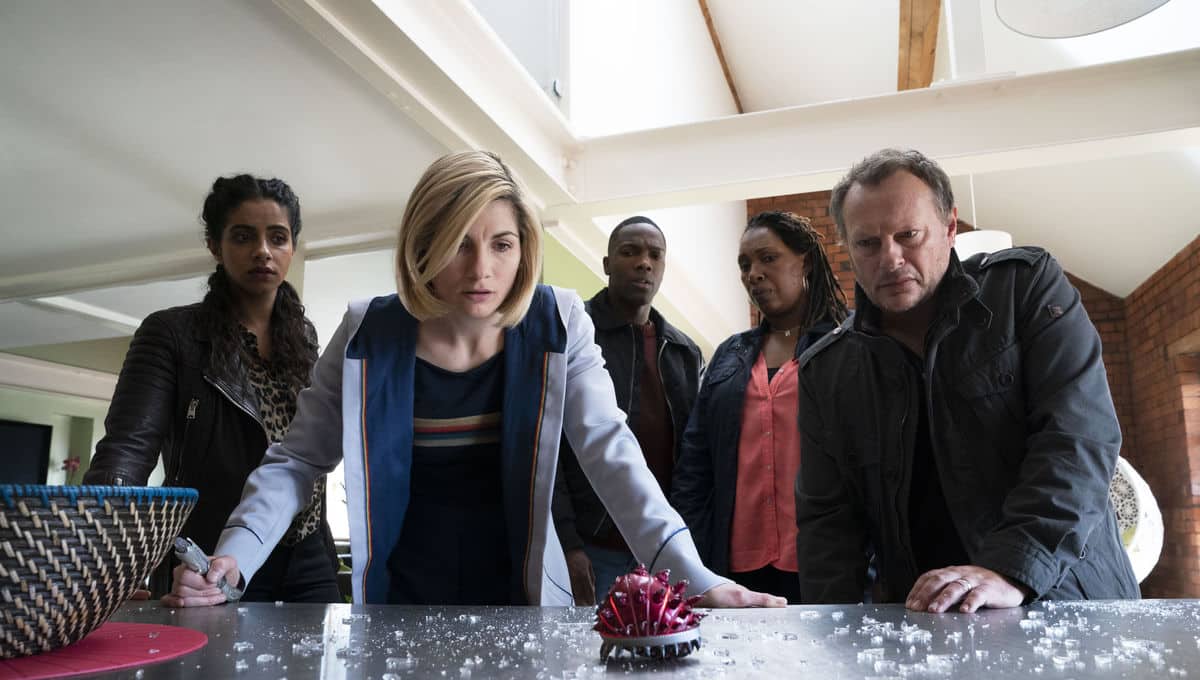 Fully recovered from the misstep of “Orphan 55,” the latest episode is well-paced & full of surprises.

Greetings, fellow travelers in space and time! While your regularly scheduled recapper Clint is at Sundance, I’ll be your guide through beautiful Gloucester. I’m a bit more forgiving of Chibnall & Company’s foibles than Clint (though I do agree that “Orphan 55” was a dud) so I hope you’ll bear with me if the tone of this recap isn’t quite what you’re accustomed to. With all that out of the way, let’s park the TARDIS and take a look around. The upward momentum continues this week on Doctor Who in an episode that manages to pack a lot in without feeling too busy or overstuffed, and give us a few historic surprises along the way.

While “Nikola Tesla’s Night of Terror” saw a return to form, “Fugitive of the Judoon” could be composed from a list of everything that made audiences fall in love with this warm, goofy, at times frustrating show. We’ve seen Team TARDIS begin to chafe at the Doctor’s unwillingness to open up to them, and it’s easy to see how that reluctance to share might be putting them in more danger than they would be otherwise. The Doctor has never been the most forthcoming character, famously–sometimes cruelly–leaving companions in the dark as to their history, and it’s good continuity that Jodie Whittaker’s Doctor seems to have inherited some of her previous incarnation’s prickliness on the topic. Yaz (Mandip Gill), Ryan (Tosin Cole), and Graham (Bradley Walsh) truly care, but there are limits to how far friendship can go without mutual trust. They’re bound to start feeling that imbalance unless the Doctor begins to share some of the terrible burdens she’s shouldered.

There is a lot of the flavor of Russell T. Davies in this episode, and it’s impossible to talk about “Fugitive” without referring back to the Tennant era, specifically “The Family of Blood” and “Human Nature.” In that two-episode arc, The Tenth Doctor has hidden himself away in the English countryside pre-World War I, with only companion Martha Jones fully aware of his true identity. When the Doctor is badly hurt, be it physical, mental, or emotional, they can sometimes recuperate by hiding their identity away and living as human for a time.

When “Fugitive” begins with adorable married couple Ruth and Lee Clayton, there are hints that not all is as it seems. In context, the hints about Ruth Clayton’s (Jo Martin) true identity are there if you know to look for them, right from the opening shot of her watch. There is immediately a sense that Ruth’s husband Lee (Neil Stuke) is more than what he seems, but writers Chibnall and Vinay Patel choose to focus on Ruth as she goes about her Monday (which also happens to be her birthday). We see that Ruth is a kind, lovely woman who fends off the disinterest of tourists and conspiracy-fueled advances of the local barista, “All-Ears Alan” (Michael Begley) with the same good-humored aplomb.

We’ve seen Team TARDIS begin to chafe at the Doctor’s unwillingness to open up to them, and it’s easy to see how that reluctance to share might be putting them in more danger than they would be otherwise.

Meanwhile, Team TARDIS expresses worry over the Doctor’s distracted state. the Doctor admits to Yaz, Ryan, and Graham that she has been searching for The Master. They’re more than a little confused as to why she’d actually go looking for The Master, not knowing what became of Gallifrey (not even knowing what Gallifrey is) and not understanding the tangle of love and hate that has always defined the Doctor/Master dynamic. The arrival of Judoon (who we last saw in the Davies run in “The Stolen Earth”) fleet makes a perfect excuse for the Doctor to evade further questions from her companions. Ruth is properly freaked out by the Judoon, but passes their scans as human. Lee seems to have a clearer picture of what’s going on and urges Ruth to pack her bags. Right after Graham is mysteriously zapped away from the Cafe where the TARDIS is parked, All-Ears Alan points the Judoon at Lee, and gets vaporized for his troubles.

Graham comes to on a spaceship, where a disembodied voice greets him. After a bit of buildup, the kidnapper is revealed to be none other than Captain Jack Harkness (John Barrowman), who is as over-the-top and handsy as we remember from the Russell T. Davies era of Who. As inappropriate as Jack can be with his…erm, enthusiasm, it was fun to see him lay one on Graham, who thankfully took being kissed by a very tan space pirate with bemusement. Once again, Graham has been confused for the Doctor. Jack is thrilled to hear of the Doctor’s new identity, and uses is transdimensional scoop to pick up Ryan and Yaz. He has an important message for the Doctor before being consumed by pesky security nanites: beware the lone Cyberman.

The Doctor is able to buy some time with the Judoon by posing as an Imperial Regulator via the psychic paper. Lee is adamant that he surrender, giving the Doctor a chance to whisk Ruth away. the Doctor’s frustration at Lee’s unwillingness to break his silence only echoes what Team TARDIS has been feeling all season, but she agrees to get Ruth to safety. There is clearly so much love and care between Lee and Ruth that it smooths the rough edges of mystery surrounding these characters. While Ruth escapes with the Doctor, Lee surrenders himself to the Judoon and their client’s emissary, Commander Gat (Ritu Arya), who greets Lee as “old friend” and “faithful companion” before he too is vaporized, but not before sending Ruth one last text message. The Judoon identify Ruth as the real fugitive, but unfortunately for them something in Lee’s last text activates something in Ruth. She goes from scared senseless to rhino-horn-snapping badass in no time. “Who are you?” the Doctor asks.

It’s not too long before we’re all given a marvelously surprising answer to this question…Ruth is the Doctor, though she somehow exists outside of the numbered timeline of Doctors. (For clarity going forward, I will refer to her as Doctor Ruth and the Doctor as Thirteen) Doctor Ruth has been hiding, John Smith-style on Earth. Thirteen has no memory of this earlier incarnation, but Doctor Ruth is certain that Thirteen is her future, not her past. It’s a thrilling development for the show, to have the possibility of the Doctor existing outside of her own timeline. And Ruth is a fabulous Doctor in the short time we get with her. She and Thirteen bounce beautifully off of one another, but Doctor Ruth is more rough-and-tumble than Thirteen, weilding a laser gun with a good deal of swagger when both Doctors are captured by the Judoon and Gat, who reveals that the client? None other than Gallifrey, confirming that Doctor Ruth and Gat are from Thirteen’s past, because Gallifrey is no more…again.

Both Doctor Ruth and Gat are horrified to learn of Gallifrey’s destruction, and there seems to be no love lost between Doctor Ruth and Thirteen. She returns to Gloucester and is reunited with Team TARDIS, whose message from Captain Jack has the Doctor shaken. Between warnings of Cybermen and the encounter with her other self, we see some real confusion and vulnerability from Thirteen. Confidence has always been such a constant with the Doctor, in all incarnations, so it’s a real moment to see her questioning herself in such a way. What is real? What is coming for her? What has Gallifrey done that made the Master angry enough to destroy it?

It’s Yaz, Ryan, and Graham who remind the Doctor of who she is, and that she is family to them. They accept her, no matter what, though it would be interesting to see how they would feel knowing she was once responsible for the destruction of her own race. Even if she was able to wipe that slate clean in saving Gallifrey in a pocket universe, it doesn’t undo the monumental trauma of having committed the act in the first place. We’ve seen previous Doctors come to grips with the horror of their actions, but this is the first sense we get that Thirteen hasn’t forgotten what she’s done, even if there was a convenient reset. One things for sure, season twelve just got a lot more interesting.