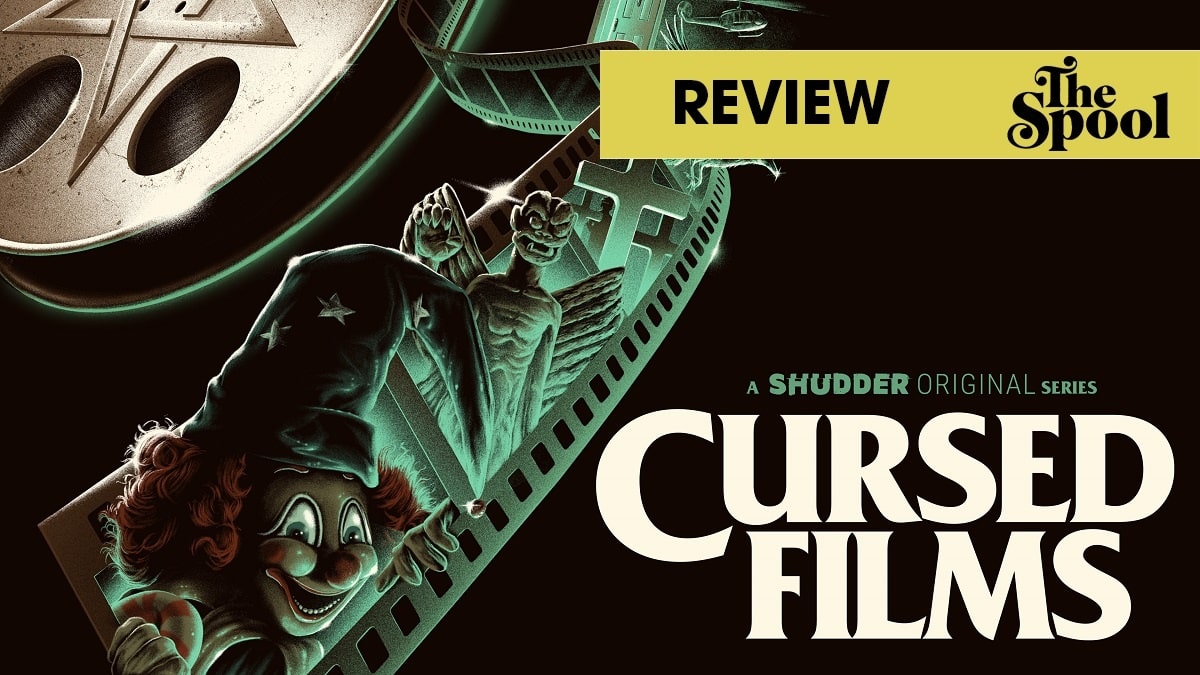 Shudder’s 5 part docuseries is a brief but fascinating look at the urban legends and true life tragedies of classic horror films.

You can’t write anything on the internet that isn’t true. John F. Kennedy Jr. faking his death so he could become the head of a shadowy cabal intent on helping President Trump collapse the government? Of course it’s true, people don’t just make up stuff like that, let alone passionately defend it. In the age of disinformation, it’s surprising that more rumors and urban legends don’t crop up about behind the scenes mysteries and malfeasance during movie shoots. Nevertheless, that particular era seems to have passed, and is the focus of Cursed Films, Shudder’s five part docuseries that walks a careful line between camp and respectful restraint.

Clocking in at a bite-sized half hour episodes, Cursed Films depicts the bad mojo surrounding the filming of such legendary horror films as The Exorcist and The Crow. The first of two episodes available for critics, focusing on Poltergeist, runs on a bit of a lean mixture, spending far too much time on fans who, even more than 35 years later, still flock to the Simi Valley, California house where the exterior shots were filmed. The long-standing rumor that the use of real skeletons in the terrifying pool scene somehow cursed the film, ultimately resulting in the untimely deaths of stars Heather O’Rourke and Dominique Dunne, is almost immediately dismissed, thankfully. In addition to being tacky and sensationalist, it also ignores the fact that real skeletons are often used as horror movie props, going as far back as the original Frankenstein, largely because they’re cheaper than paying a special effects technician to make them. Literally anyone can buy a real skeleton. Go ahead, try it. Hang your clothes on it. You probably won’t bring a death curse upon your household.

The episode is at its most compelling during an interview with Poltergeist III director Gary Sherman, who speaks, with genuine grief, about his relationship with O’Rourke, and the struggle to complete the film after her death when MGM refused to scrap it. Sherman’s sorrow is a good illustration of critic/screenwriter April Wolfe’s observation that people have an easier time processing terrible things if we can attribute them to some otherworldly force. It wasn’t skeletons that killed Heather O’Rourke, it was a misdiagnosed medical condition, just as it was an angry, abusive ex-boyfriend who killed Dominique Dunne. We can control whether or not we buy a real skeleton, we have no say over medical error, or the real life evil that men do.

It’s thoughtful, but, other than an interview with the surprisingly amiable neighbor who lives next door to the Freeling family house, it doesn’t bring much new information to the table. A bit juicier (and more fun) is the episode devoted to The Omen. Per capita, The Omen probably has more grisly events surrounding it (including a decapitation in a car accident, and someone literally being eaten by a tiger) than any of the other movies featured in the series. If you want to be a party pooper you could point out that many of the events mentioned happened both before, and long after shooting took place, or that some of them, like an IRA bombing, are tenuously connected at best. Still, a reasonable case could be made for some sort of malevolent forces at work, and even if there’s no way to prove that the previously mentioned car accident happened mere steps away from a road sign reading OMMEN 66.6, it makes for some entertainingly creepy storytelling.

Rather than attributing the rash of misfortune to the use of real skeletons as props, some of the interviewees suggest that the Devil himself, a shy, retiring type who didn’t want the world to be aware of his infernal existence, personally sabotaged the film. Considering that The Omen was a massive hit, and, along with The Exorcist, remains the gold standard in religious horror, it would appear that he wasn’t all that successful. Because this episode of Cursed Films doesn’t involve the death of a child, it’s free to get a little silly, and it does, particularly with interviews with “black magicians,” and a Satanist who performs an incantation. All it’s missing is someone using a Ouija board to get in touch with the Devil’s PR agent.

If you’re a horror fan, you’ll likely already know most of the stories recounted in Cursed Films (in fact, three separate documentaries about the strange events surrounding the filming of The Omen already exist). Nevertheless, like a campfire ghost story, they’re always fun to hear again while maintaining both an open mind and a raised eyebrow. Most film shoots will have bizarre events or unexplained accidents somewhere behind the scenes, if you look hard enough. That it seems to happen more often with horror movies is what makes the genre so effective, and so popular.