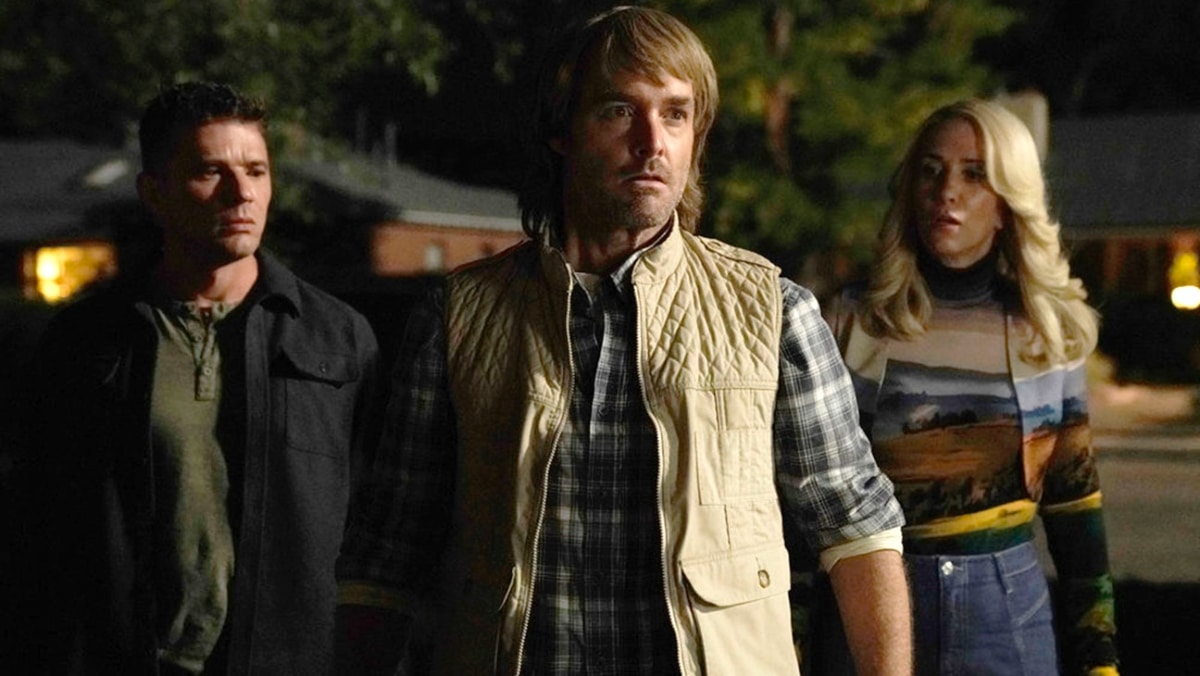 In the age of streaming, any movie, short of maybe Sky Captain and the World of Tomorrow, can become a TV show. It doesn’t matter if your original film was a box office turkey, these channels just want “content” and any previously established brand name will do. Through this phenomenon comes MacGruber, a continuation of a Saturday Night Live character and the star of a 2010 movie that crashed and burned financially. But when Peacock desperately needed something, anything, to release over the holidays, MacGruber rose from the aches like a conceited phoenix.

Initially a parody of Richard Dean Anderson’s MacGyver TV character, the MacGruber feature film twisted him around to functioning as a pastiche of 1980s action heroes. That’s the mold the new TV show inhabits, with the production once again carrying cinematography and an acting style reminiscent of old-school titles like Lethal Weapon. Even newcomers to the cast of MacGruber, like Laurence Fishburne and Sam Elliott, are artists more widely associated with straightforward dramas than comedies where people use celery in inappropriate ways.

MacGruber as a TV show begins ten years after the original film, with the titular character (still played by Will Forte) trapped in a lengthy prison sentence. Turns out his triumphant dispatching of adversary Dieter van Cunth constituted murder in the eyes of the American justice system. General Barrett Fasoose (Laurence Fishburne) has come to MacGruber to offer him a pardon. However, it requires him to be handed over to terrorists in a hostage exchange meant to get back the daughter of the President of the United States.

This situation soon brings MacGruber face-to-face with the nefarious Brigadier Commander Enos Queeth (Billy Zane). This baddie has a long-simmering grudge with MacGruber, fueling his plans so evil that the show’s protagonist can’t possibly face him alone. Thus, it’s time to reunite with his former partners Vicki St. Elmo (Kristen Wiig) and Dixon Piper (Ryan Philippe), the latter of whom is furious with MacGruber over how he ruined his life and military career.

The most disappointing part of MacGruber is how a program seemingly all about unpredictable laughs opts to go the standard comedy sequel route (see also: Zoolander 2, Anchorman 2) of setting everything back to square one. Instead of just building off the central trio already being united and working together at the end of the MacGruber film, we have to go through the process of them earning each other’s trust again. Piper and MacGruber’s dynamic especially feels too derivative of the original film, which undercuts the wacky attempts at yuks.

Worse, the MacGruber TV show is too in love with doing hollow callbacks to memorable gags from the original film, including the name of primary adversary Queeth. The most disappointing of these comes in the fifth episode when the program does a variation on the “I’ll suck your dick!” scene. Shocking no one, this bit doesn’t work so well a second time when its punchline is obvious. Has pop culture gone so far down the nostalgia sequel rabbit hole that even MacGruber has to spoon-fed audiences gags it’s seen before?

The most positive aspect of the production is the acting, with the collection of actors committing fully to the strange mixture of 1980s action movie pastiche and absurdist humor. Will Forte’s MacGruber can overstay his welcome, especially when episodes are watched in a binging format, but the performer’s best moments hit a bullseye in rendering this character like a five-year-old’s vision of what a macho Reagan-era action hero would look like. Co-star Kristen Wiig also scores the biggest laughs in the first half of the season through her comical attempts at mimicking a Russian accent during an undercover mission.

It also can’t be stressed enough how deliriously strange it is to watch Sam Elliott inhabit a role in a production like this, especially since he lends every one of his lines the same level of gravitas he brought to A Star is Born. If nothing else, at least MacGruber allowed the world a chance to hear him utter in that perfect deep Southern drawl the phrase “You’re my good boy.”

The best news I can offer to fans of the original 2010 movie is they’ll probably walk away pleased by MacGruber as a TV show. It’s just the film but delivered in 30-minute doses. However, even those devotees may wish that translating Forte’s creation to television had resulted in some more creative gags, or at least a plot that didn’t feel cribbed from comedy sequel movie cliches. Some amusing jokes and memorable performances can’t mitigate how MacGruber ends up fizzling out rather than exploding with laughs.

MacGruber is now available on Peacock.