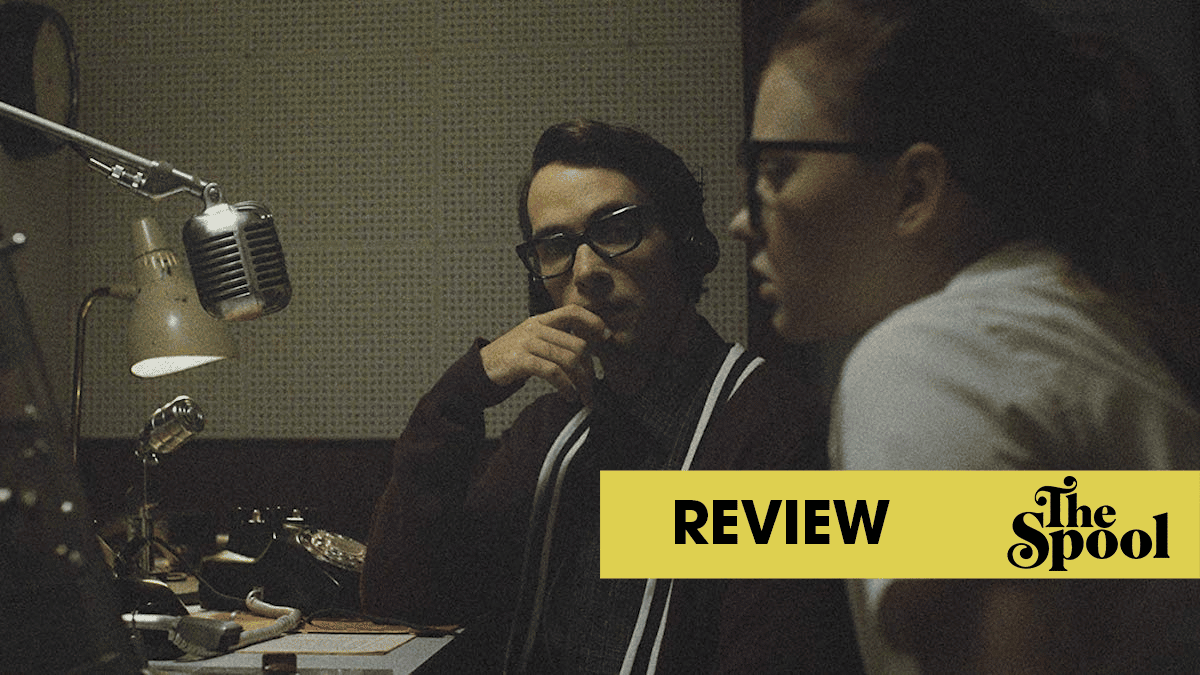 Andrew Patterson’s tale of strange goings-on in ’50s New Mexico is full of detail, even if it doesn’t reach its full potenial.

A good small-town film is an art. Andrew Patterson’s atomic age pastiche, The Vast of Night, is a fastidious recreation of anthology shows like The Twilight Zone or serials like Orson Welles’ epoch-defining version of War of the Worlds. That attention to detail is pervasive in folksy regional expressions, retro-future anxiety, and Erick Alexander and Jared Bulmer’s spare but escalating score. And that’s not even to mention the wrap-arounds here, with a TV program cutely called The Paradox Theater.

But that anal-retentive approach to the time and texture of its forefathers is less the content than the trappings for something more uniquely reflective and penetrating. Without tipping its hand, this is more in line with subversively diplomatic sci-fi like Coherence, Contact, and Robert Wise’s original The Day the Earth Stood Still. More so, there’s a touch of the analog obsessions of Matt Johnson or Peter Strickland’s work.

Cayuga, New Mexico is the axis of the world. It’s also a vanishing point for Everett Sloan (Jake Horowitz) and Fay Crocker (Sierra McCormick), two 1950s teens whose respective experiences and fixations with technological touchstones of the era suit them to investigate the aural and visual phenomena enchanting the errant citizens. It’s the night of the big game, a yearly galvanizing event that’s drawn in most. It’s also left a smattering of outsiders who gravitate to inscrutable radio waves (a savvy piece of sound design that sounds like it could be a B-side released on Warp in the ‘90s) and a disturbance in the air.

The pretext for a frenzied atmosphere and breathless pacing, The Vast of Night dips into the cultural and social palate of its period. But those details cloak the interest in less pulpy notions about how technology shapes worldviews and the ghost stories of America’s past. James Montague and Craig W. Sanger’s script could cut back on self-referentiality, but the overall film is undergirded with an effective, whining melancholy. One sequence where Fay and Everett prognosticate about the year 2000 crosses into glib corniness, but other references to era ephemera like Sputnik, the marginalization of minorities, and superstitions about foreigners are much more evocative.

The aggression of that scene is an aberration, a blip in a film that’s less invested in the “what” than the “how.” True to small town mythicism, Fay and Everett feel plucked out of idealistic Americana. As played by Horowitz, Everett’s hungry but scrupulous—he never forgets to ask permission to record—radio reporter is a dead ringer for the hucksters of ‘50s media. He isn’t Sidney Falco, but he’s driven by a healthy skepticism and a career-minded sensibility. With a cigarette bumbling on his lips and sputtering flattery in every direction for a pull-quote, he’s a man in every place whether he’s running between car windows and playing up his radio-ready voice at WOTW between rockabilly standards.

Fay isn’t as immediately developed as a switchboard operator who leads Everett in the direction of a number of crucial characters and locations, but she’s immediately capable, even as she’s relegated to sidekick for too long. The appearance of an ingenue teenybopper, McCormick smartly dials up the character’s adventurousness without losing her moony admiration for Everett’s brusque manner and her aspirations beyond the town limits. It also helps that she’s a great listener to everyone around her, a conscious attention and empathy always visible on her face.

Patterson and the script are less inviting visual comparisons to their predecessors than trading campfire stories from decades earlier with the quiet awe—and emotional impact—fully intact.

And that’s perhaps what really separates The Vast of Night. In contrast to a more perspicuous nostalgia piece like J.J. Abrams’ Super 8, Patterson and the script are less inviting visual comparisons to their predecessors than trading campfire stories from decades earlier with the quiet awe—and emotional impact—fully intact. That isn’t to say this isn’t a thriller in feel, though. Patterson’s camerawork keeps them constantly in motion whether they’re digging through a library basement or wandering through a town square where winking fluorescent lights hover over them.

Epitomized by an ostentatious drone-shot sequence that charges through the town’s surrounding woods until it flies into and out of the game auditorium, this is a film whose occasional flourishes underline the relative modesty of the film. It’s not accidental that one of the major scenes is dominated by a black screen, snatches of Everett and Fay’s faces and the mournful narration of a caller whose life has been consumed by a single memory.

Those lo-fi choices don’t take primacy over the storytelling, but along with fuzzy B&W interludes, they do qualify the experience in context of its influences. The film then almost boxes itself into a perception of slightness. Artificiality is an impossibility to break, but The Vast of Night is the rare film that underestimates its own worth.

The Vast of Night touches down on Amazon Prime this Friday, May 29.