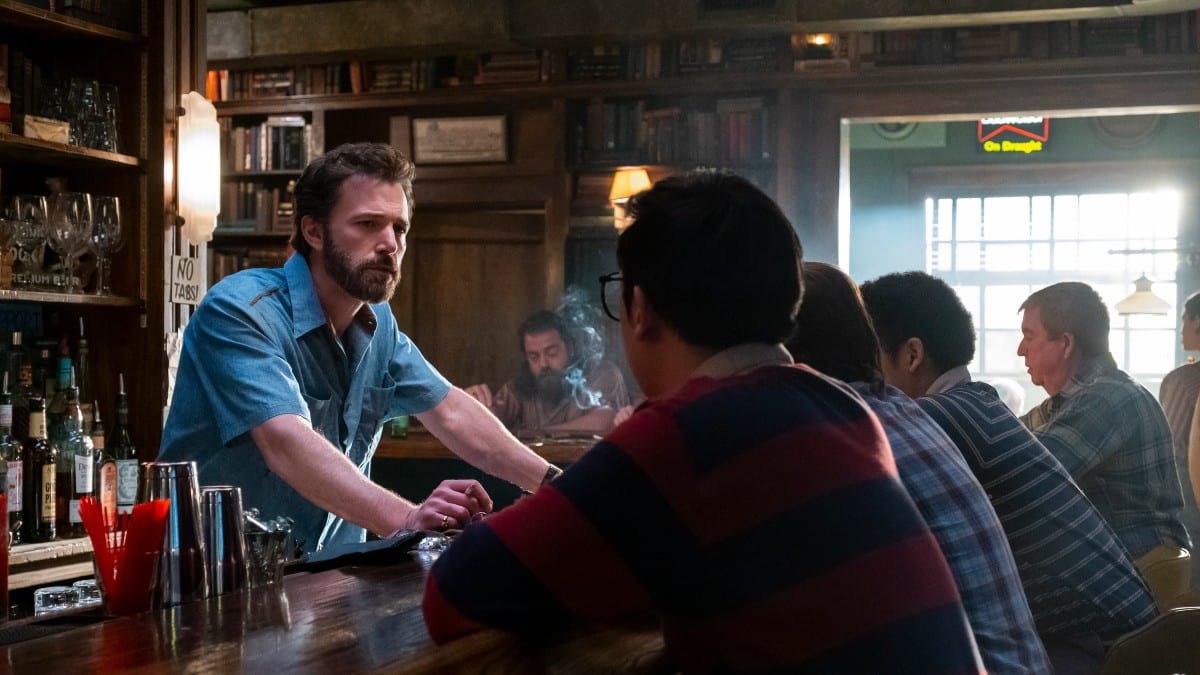 George Clooney’s newest lacks personality or wisdom and strands its talented cast with a hazy script.

The Tender Bar, streaming on Amazon January 7th, is based on J. R. Moehringer’s memoir of the same name. In practice though, it could be anyone’s story, and not because there’s a universality to the tale it tells. George Clooney’s film is so generic that the film’s Moehringer might as well be a human-shaped blank space. Boasting the archly-drawn relatives of the film version of August: Osage County, the subtle needle drops of a Robert Zemeckis film, and the emotional insight of a Snapple lid fun fact, the picture leaves one thirsty for something of substance.

Clooney’s film tracks J.R. (played as a child by Daniel Ranieri and as an adult by Tye Sheridan) across the first 25-ish years of his life. At 11, J.R. and his single mother move into his grandfather (Christopher Lloyd)’s home. Here, J.R., who is fascinated by his absentee dad, finds a surrogate father figure in his Uncle Charlie (Ben Affleck). Wisdom pours from Charlie’s lips like beer from the taps he tends. His counsel is just the kind of thing a wayward kid like J.R. needs to hear.

During this time, J.R. falls in love with writing, a passion that will define his exploits at Yale. Also formative during that time? A massive crush on fellow student Sidney (Brianna Middleton). It’s one that J.R. can’t shake no matter how many times she rejects him. Life rarely has easy outs and all-solving answers for J.R., but with the wisdom of Uncle Charlie and the power of the written word (not to mention more than a pinch of luck) he might well make it through.

William Monahan’s screenplay for The Tender Bar is messy, and it struggles to breathe life into J.R. and give weight to the challenges he faces. At least in this telling, any problem J.R. might face is handwaved away the moment it becomes a factor. The potential difficulties of affording Yale’s tuition, for instance, are given all the weight of a feather.

Affleck does a solid job mixing gruff with warmth in Charlie’s talks with J.R., but he never gets to be more than a very surface-level mentor figure.

Moreover, Sheridan is given very little to work with for his take on J.R. except for his obsession with a girl he slept with once. He’s neither a vessel for exploring weightier themes nor somebody who’d be fun to hang out with. He’s simply not a strong enough character to build an entire feature around. The attributes that made the real J.R. Moehringer so compelling might have been better served by a documentary.

Paradoxically, one of The Tender Bar’s best moments draws directly on its otherwise frustrating conception of J.R. as a run-of-the-mill dude. It hits as J.R. works a puzzle with a young girl living in a troubled home. Their nonchalant conversation gives way to the girl asking questions, questions that inspire J.R. to start giving her advice—the same sort of advice Uncle Charlie passed on to him.

For this brief sequence, everything clicks. The Tender Bar suggests that what makes J.R. extraordinary is his very ordinariness. People who leave profound impacts on us aren’t often astounding individuals—they’re ordinary folks who shape the world by listening and doing what good they can. Through recognizing both the individual humanity and the vital importance of surrogate parental figures, Clooney and his collaborators craft striking cinema.

Unfortunately, right after this conversation, The Tender Bar slips back into broad caricature. Its myriad shortcomings prove all the more frustrating thanks to that glimmer of potential. Would that it had focused on the bonds of care formed outside blood relations, rather than a batch of broad comedy whose theoretical highlights include an onslaught of farts from Lloyd.

As with J.R., the rest of The Tender Bar’s cast are so generic that it’s hard to latch onto any of them—even Ben Affleck’s turn as Uncle Charlie, easily the showiest role in the picture. Affleck does a solid job mixing gruff with warmth in Charlie’s talks with J.R., but he never gets to be more than a very surface-level mentor figure.

Charlie never feels like a whole person, which is fine for the flashback segments when young J.R. is learning about life, literature, the universe, and everything from him. But when J.R. grows up, Charlie doesn’t reveal complications or deeper layers of the sort an adult would catch. Instead, he remains static, denying Affleck opportunities to stretch as an actor. At least he gets moments of charm, though. That’s more than poor Tye Sheridan (who’s done excellent work with filmmakers like Paul Schrader and Jeff Nichols) gets, left to drift as the grown J.R.

The who movie plays like a blurry recollection of other coming-of-age dramas, one so vaguely not quite familiar that it makes sense for the cast to feel lost. Their characters exist to spout inspirational quotes and play capital letters WACKY comedy in the service of a film that never manages to be more than a haze.

The Tender Bar arrives on Amazon on January 7th, 2022.