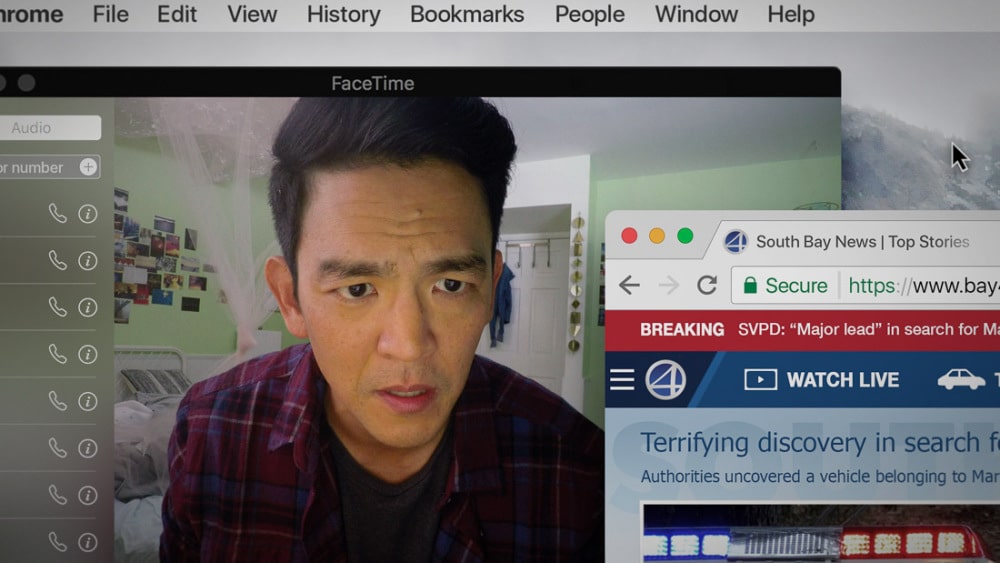 (We previously reviewed Searching in our coverage of the Chicago Critics Film Festival. Read our capsule review.)

While ‘laptop cinema’ films like Unfriended and Open Windows are becoming a subgenre unto themselves, no one has really cracked the code of how to tell a gripping, complete story through the almost ARG-like combination of Internet media the format demands. Searching, the feature debut of Aneesh Chaganty (previously known for his short film “Seeds,” which was filmed entirely via Google Glass), may have just cracked the code – a compelling Hitchcockian thriller about a widowed father (John Cho) using technology to look for his missing daughter, with the help of a well-meaning detective (Debra Messing) who wants to encourage the desperate dad to search through his daughter’s old laptop, phone, and social media accounts for any clue as to her whereabouts. Along the way, he learns more about his daughter’s life than he ever anticipated, and about the unexpectedly fractured nature of their relationship.

Of course, the audience views this journey completely through laptop screens, news footage, smartphones, and the other interconnected devices we use to organize our lives. Rather than using this as a narrative gimmick, however, Searching uses the format in delightfully varied ways. We don’t just see the story through Cho’s daughter’s webcam; we see Skype calls, Google Maps, FaceTime, and even a fictionalized take on a very real service that livestreams funerals people (which becomes the dramatic setting for one of the film’s most astonishing twists).

Like all great mysteries, Searching keeps its twists and turns centered in people we care about, Chaganty (and co-writer/producer Sev Ohanian) mining their screens-only conceit to efficiently convey information not only about the search itself, but of the characters at its heart. Cho’s character isn’t just playing detective to look for his daughter; through hacking her email and looking through old livestreams, Searching occasionally becomes a family drama about the rift between a father and daughter in the wake of unspeakable tragedy. The film’s opening minutes, which basically play like a Google commercial version of the opening of Up, lays a lot of needed groundwork to humanize people its audience will follow through a dozen layers of technological artifice.

When it has to get down to business and become a mystery/thriller, though, Searching fires on all cylinders. The screen-centric format allows the viewer to play detective right along with Cho, the reams of emails and text messages and other cyber-clues in the periphery making for a strangely interactive experience. Maybe Chaganty’s greatest skill as a filmmaker here is that he doesn’t feel hindered by these restrictions – despite its unconventional approach, it never feels less than an expertly made thriller. The whole affair is well-paced, each new clue and development in Cho’s search feeling unexpected and novel. Chaganty absolutely has the chops to make a more conventional thriller – but when you excel at such an interesting approach, why would you?

Perhaps most admirably, however, is Chaganty’s innate ability to draw out great performances from actors who mostly only interact with a webcam. Cho is always a welcome presence on screen, and Searching presents a great opportunity to show the full range of his considerable talents. His Hitchcockian obsessiveness over his daughter’s disappearance manifests itself in myriad ways, some of his greater character flaws being brought into sharper relief with each new reveal, or video diary. At the same time, Cho also sells the lighter moments – he’s a goofy, out of touch tech dad as much as he is a concerned thriller protagonist, which leads to some delightfully corny touches: you’ll giggle every time Cho’s dad learns about a new term or piece of technology, only for Chaganty to hard cut to his Google search bar.

These kinds of high concept thrillers tend to sink or swim based on how well the premise is delivered, and Searching may be one of the most assured examples of the burgeoning laptop cinema genre. Rather than coming up with the screens-only conceit and working backwards, Chaganty and crew have managed to make an organic story that could have worked just fine in a more conventionally-formatted film. In doing so, Saerching manages to mine their self-imposed restrictions to open up new possibilities for conveying narrative and character information. Every background detail is packed with clues and character bits; there are entire storylines playing out in the margins of Searching that absolutely reward repeat viewing. Future screen-centric films should use Searching as their new yardstick for quality.

Searching reaches through the laptop onto movie screens on Friday, August 31st.