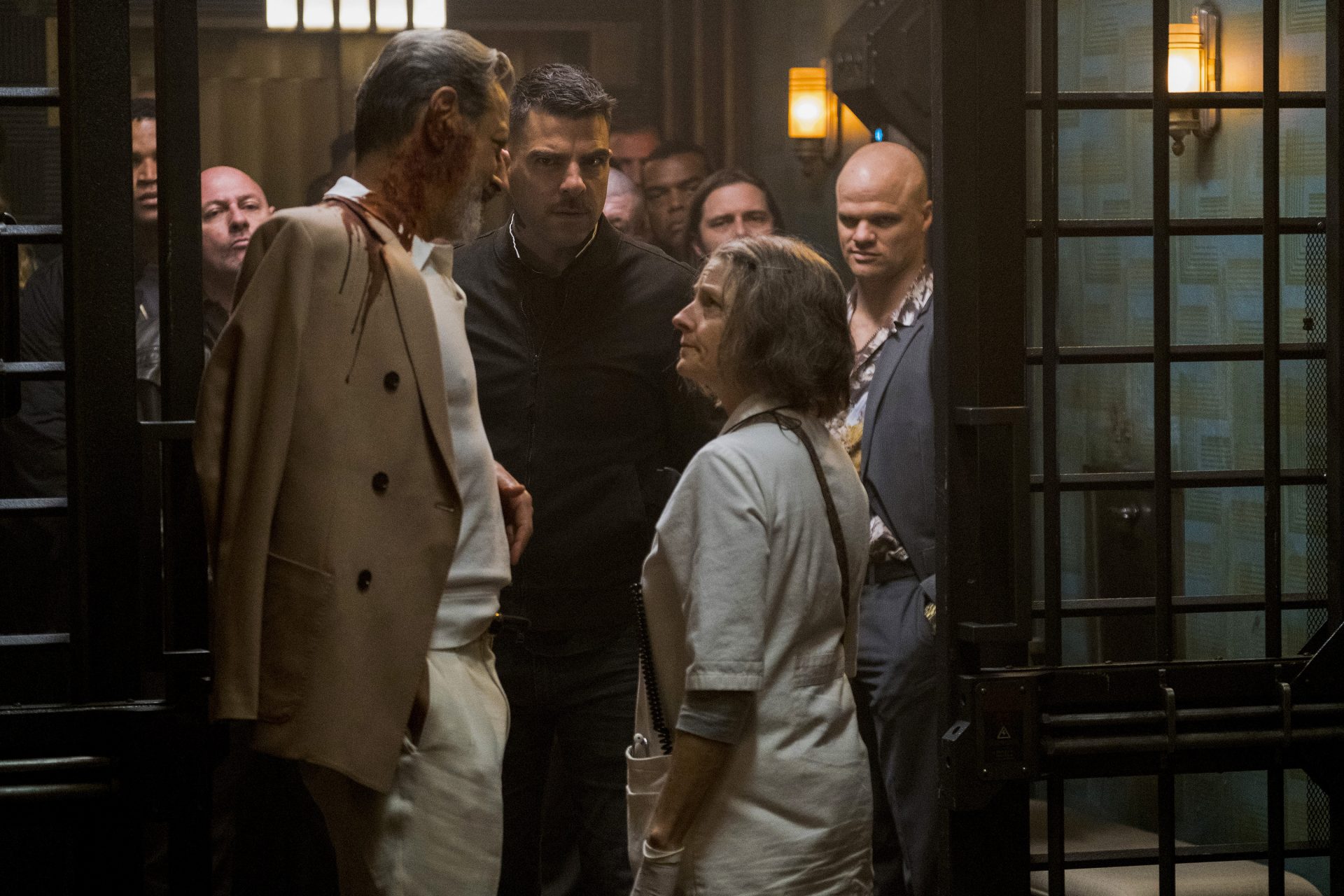 Drew Pearce’s pulpy near-future potboiler about a futuristic hotel/hospital for bad guys lets its stacked cast have fun amongst some shaky plotting.

Grungy, retro sci-fi seems to be making a comeback the last few years – cyberpunk potboilers whose scripts wouldn’t be out of place in a direct-to-video Cronenberg knockoff you’d pick up as a 3-for-1 deal at your local video store in the 90s. Not that this is a bad thing; hell, just last week Leigh Whannell’s Upgrade pushed a lot of the same near-future sci-fi buttons, and it was packed with bone-crunching fun.

Now, along comes Hotel Artemis for another slice of the pulpy science fiction pie, with a heaping helping of John Wick and Atomic Blonde tossed into the mix. It doesn’t quite hold up as tightly as things like Upgrade, but it spends much more of its capital on a killer cast that helps plaster over some of the cracks in its plot and pacing.

The year is 2028; the place, Los Angeles. Water shortages (spurred on by a greedy company with the on-the-nose name of Clearwater) have led to widespread riots, and the city is a hellscape. Caught in the mix are the staff and tenants of Hotel Artemis, a futuristically retro-fitted Old Hollywood hotel run by Nurse (Jodie Foster), who patches up high-class assassins, hitmen and thieves with nanites and 3D-printed organs with the help of her burly assistant Everest (Dave Bautista). The Artemis has rules: no guns, no killing other tenants, no exceptions when vacancies are full.

Among those staying at the hotel this fateful night are bank robbers Waikiki (Sterling K. Brown) and his critically hurt brother Honolulu (Brian Tyree Henry); seductive French assassin Nice (Sofia Boutella); and jittery arms dealer Acapulco (Charlie Day). They’ve all got skeletons in their closet and secret agendas for being at the Artemis, all of which will come to a head when Niagara (Jeff Goldblum), the mob boss, comes a-callin’ with a life-threatening injury and no open rooms at the Artemis. Oh, and all those rules? Before the movie’s done, they’ll all be thrown out the window.

From the cutesy codenames, to the cheesy needle-drops (seriously, there’s a literal needle-drop as “California Dreamin’” is piped through the speakers while Nurse makes her rounds, complete with the record sleeve tucked into frame in case you forget what song is playing), Hotel Artemis giddily runs with all its genre pastiche. Writer/director Drew Pearce, his directorial debut after contributing to the scripts for Iron Man 3 and Mission: Impossible 5, slams as many retro sign-posts as he can into the film, from its Tarantino-esque ensemble of quippy killers to the old-school copyright text underneath the film’s title. It’s also impossible to ignore the John Wick/Atomic Blonde comparisons, given its hotel-for-hitmen concept and Boutella’s presence. It’s more than a little derivative, but Artemis clearly just wants to have fun with its toys.

Honestly, with a cast this stacked, it’s hard for the audience to care either – from Foster’s no-nonsense nurse to Boutella’s slinky hitwoman, it’s great fun to see this cast of unconventional, kooky character actors bounce off each other. Foster sinks her teeth into Nurse with gleeful abandon, playing her as a lost, cynical soul shuffling around the austere halls of the Artemis with a tragic pragmatism; it’s truly a delight seeing her at the forefront of a goofy genre picture like this. Same goes for Sterling K. Brown, who slips comfortably into the well-polished shoes of the film’s protagonist. He’s been blowing up on TV with This Is Us, but this feels like the first chance to show he’s more than capable of being a leading man.

The rest of the ensemble is also great fun, if varying degrees of superfluous; Bautista is a wonderful gentle giant, bring a very Drax-like stoicism to the hulking Everest (“You see this badge? It says ‘healthcare professional’,” is a line I’ll never get tired of), and Boutella gets some great chances to shine, including a killer showcase of her action chops in a cramped hallway. And, well, what is there to say that hasn’t already been said about Goldblum? He’s not in the film very much, but he mines every, uh, um, word of his overly-stylized dialogue for maximum quirk, and it’s always a joy to see.

It’s a good thing the cast is so game, because apart from the immediate thrills of Pearce’s effective, game direction and Cliff Martinez’s appropriately moody score, Hotel Artemis is more than a little shaky with its plotting. There are more than a few characters whose presence feel superfluous, or only present to serve one smaller aspect of the plot; in the end, Charlie Day’s character could have been removed with no one the wiser. The script throws a lot of red herrings our direction, and doesn’t resolve them in the most elegant ways: Niagara’s ire toward the Artemis could have stemmed toward any number of things – from a mysterious object Honolulu stole in their botched bank robbery, to Nurse bringing in an injured cop (Jenny Slate) with a mysterious connection to her past – but the plot beats just sort of move along without them. By the time tensions boil over, and the Artemis becomes the stage for a bit of stylized action, it feels like Pearce forgot some of the things he set up, which is a shame.

Still, these concerns are significant, but don’t completely dampen the sheer pulp joy that comes from the cheeky futuristic flourishes of Hotel Artemis. It’s almost worth it just to see people like Jodie Foster, Sterling K. Brown and crew sink their teeth into some down and dirty sci-fi revenge plotting, even as the script itself doesn’t give them anything revolutionary to do. As it is, Hotel Artemis is diverting and fun, but don’t expect Shakespeare – or even mid-tier Tarantino.