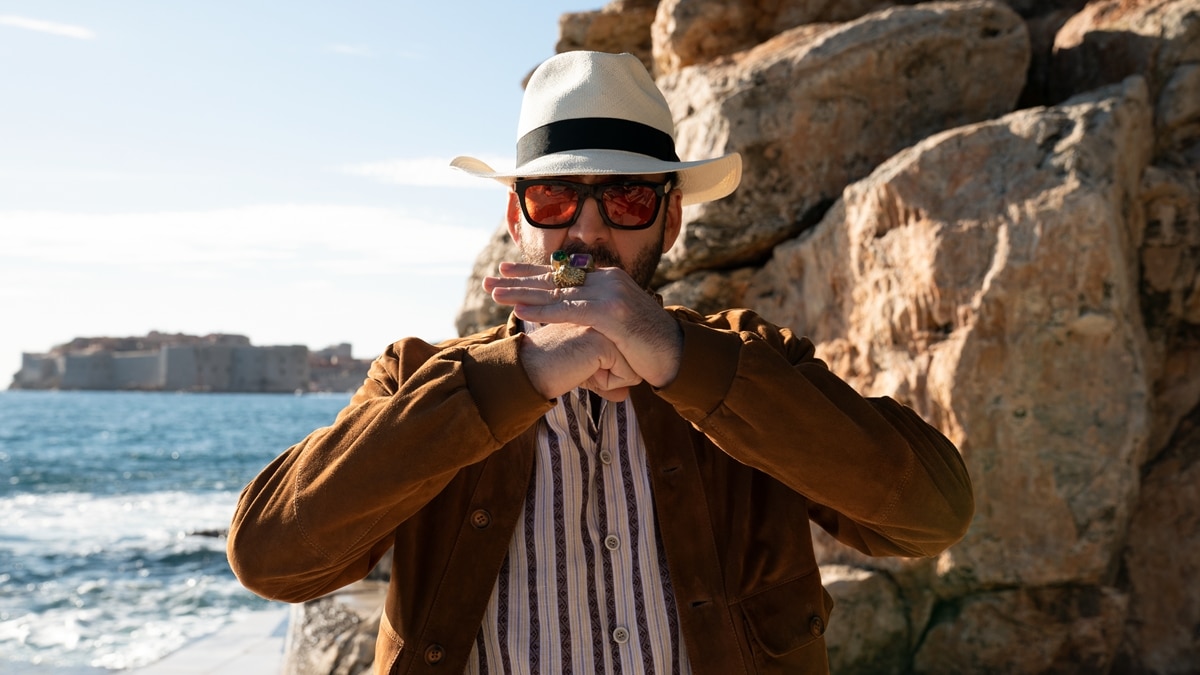 Nicolas Cage became a national institution somewhere between stealing Huggies from a convenience store and putting the bunny back in the box. Since then, his career has been a mixture of some highs and many more lows. In the process, he’s gone from one of our most celebrated actors to a self-parody. It’s debatable whether Cage has previously leaned into his own outsized persona, but there’s no question he’s in on the joke with The Unbearable Weight of Massive Talent.

Directed by Tom Gormican (who co-wrote the screenplay with Kevin Etten), Unbearable Weight acts as both a love letter to Cage’s iconic movie star career and an infomercial to sell audiences on the fact he still has the magic. It’s been a hot minute since mainstream audiences have seen him in something this entertaining released wide in theaters.

Cage gets the JCVD treatment here by playing himself, a washed-up actor drowning in debts. While never mentioned directly in the movie, but it’s probably from one of his castles. He also doesn’t know how to communicate with his 15-year-old daughter, Addy (Lily Mo Sheen). The best he can come up with is forcing her to watch only movies he likes, such as the German expressionist classic The Cabinet of Dr. Caligari.

After being turned down for a role he was gunning for, he accepts a paid offer to show up at the birthday party of a rich fan named Javi (Pedro Pascal) in beautiful Mallorca. Javi also happens to be a notorious drug kingpin who may have kidnapped the Mallorca president’s daughter, Maria (Katrin Vankova). This brings in two bumbling CIA agents, played by Tiffany Haddish and Ike Barinholtz, both having lots of fun. They recruit Cage to spy on Javi and attempt to rescue Maria. Once the two men meet and start to form a strong bond, it becomes a different–and much better–film.

The scenes of [Nicolas Cage and Pedro Pascal] bonding around Javi’s endless compound are the film’s highlights.

The scenes of them bonding around Javi’s endless compound are the film’s highlights. They offer the most effective meta-commentary on Cage’s career, like when he claims Captain Corelli’s Mandolin was “underappreciated” with a straight face. There’s also a heartwarming scene involving a marmalade-loving bear that hits the sweet spot of silly and genuine. The movie sandwiched here is about two middle-aged men trying to figure their lives out while also forming a strong creative bond.

It’s great while it lasts, especially during a sequence where they try to come up with a script idea after taking LSD. It turns into the satire of previous over-the-top Cage performances the rest of the film tries to match. Unfortunately, it cannot quite achieve that. It works because the action itself is small stakes (they try to jump over a wall that they could easily walk around), but it’s shot with the frenetic intensity of a John Woo film like the Cage classic, Face-Off.

Cookie-cutter action scenes and forced plot twists bog down the last act. However, it remains watchable because of Cage. Even in his worst films, Cage never gives less than 150%. He doesn’t disappoint here. In a movie where Cage makes fun of himself for a career full of him yelling at the top of his lungs, there’s less screaming from him here than I thought would happen. No worries, there’s still a Wicker Man reference. He reminds us that he’s always been a gifted physical performer, whether it is the way he uses his wild eyes while tripping balls or falling all over a room after accidentally poisoning himself.

Some of the meta-ness doesn’t work. For example, there’s a scene where Cage has conversations with a dead-eyed CGI version of his younger self from the Wild at Heart-era of his filmography. Unfortunately, these scenes get us stuck in the Uncanny Valley. Additionally, they don’t add much to the story besides confusing the audience into thinking Cage is suffering from hallucinations.

For the most part, though, Unbearable Weight meets the task by celebrating Cage’s career with a ridiculous film as tongue in cheek as its title. For someone who doesn’t seem to know when the world’s laughing at him, it’s a relief to watch one of our finest actors not taking himself too seriously and laughing with us for a change.

The Unbearable Weight of Massive Talent leaps into theatres on April 22.