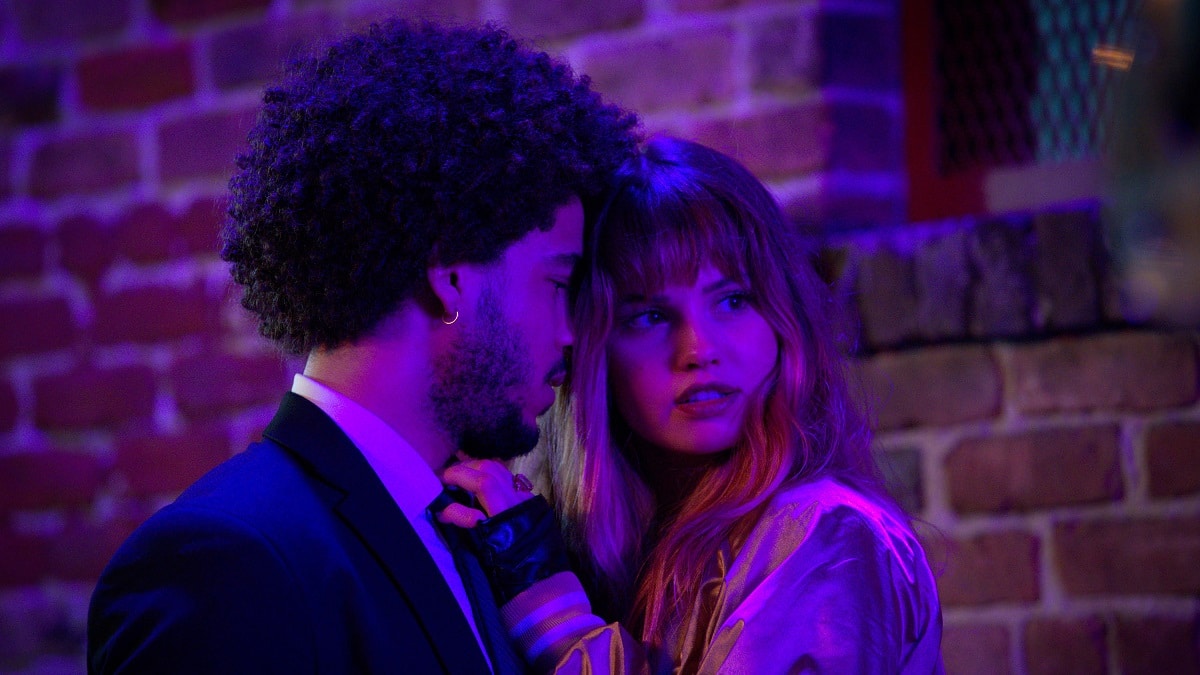 While the new Netflix feature runs out of steam, it pulses with fun for a solid hour.

Adam Randall’s Night Teeth, Netflix’s latest foray into vampire mythmaking, finds the streaming giant betting big on name recognition and slick visuals as blood splatters across Los Angeles. Following Benny (Jorge Lendeborg Jr.), a broke college student who picks up two vampires on a mission to take over the city, the film leans on its bright, exciting initial energy. It constructs a world in which vampires and humans have coexisted peacefully for decades, giving enough information to intrigue but not enough to answer all necessary questions.

Released amid horror film fests and pumpkins filling department stores, Night Teeth will find an audience, one that’s neither under- nor overwhelmed by the product in front of them. Benny drives Blaire (Debby Ryan) and Zoe (Lucy Fry) across the city Collateral-style, an undeserving comparison that will likely be in headlines across several publications. The only actual similarity: the passengers are killing people at each stop. In Randall’s film, camp replaces fashion, as the director asks the audience to join in on the fun. Don’t overthink it, just hop in the car and enjoy the ride.

With each passing location, more vampires come out to play, fight, or do some combination of both. It gives Randall a reason to include more actors, more known quantities, like Megan Fox, Sydney Sweeney, and Alexander Ludwig. There’s a clear buy-in from everyone on screen, even if they’re used sparingly.

However, any attempt to make these characters fuller portraits of human beings (or vampires) seems underbaked. Benny wants to be a musician. Blaire has lost her entire family and now feels dependent on Zoe. Even Jay (​​Raúl Castillo), Benny’s older brother and a vampire-human liaison, is given a girlfriend to track down. Unfortunately, these storylines, along with the romance between Benny and Blaire, don’t begin to reach the enjoyment or enthusiasm of the scenes featuring crossbows firing arrows in a crowded club.

When the film leans into sex, blood, and the weirdness of the world, it oozes fun.

Night Teeth works when it coasts along on the charm of its leads, Ryan and Lendeborg in particular. When the film leans into sex, blood, and the weirdness of the world, it oozes fun. It takes its audience to “suck” hotels, shady backrooms, and extravagant mansions where rich vampires drink blood out of taps. When characters talk about the taste of fresh blood like a pint of on-tap IPA, it’s ridiculous, in a good way. It’s Netflix—and all of its past original programming—as being both in on the joke and the butt of it. Night Teeth can be funny, and should be much funnier, scoffing at all of the faux original movies that came before it. Because the style, story, and conclusion will remind you of one thing or another.

The narrative hums when Ryan, Fry, and Lendeborg drive around LA. They’re playing fuck, marry, kill, dodging bullets and crossbows, and leaving a wake of victims in their path. Everyone is flirting with everyone. Shorter scenes chop up the action, allowing famous people (like Alfie Allen, playing a power-hungry blood-drinker) to talk with even more famous folks like Fox and Sweeney. When it slows down, attempting to refocus the story on romance and the hope for a brighter future, it drags. The burden of establishing chemistry, backgrounds, and motives for characters denies them the fun they should be having. The third act becomes a checklist of telegraphed sequences, ending without much surprise.

Still, Randall makes LA look ultramodern, pushing vivid colors and water slicked streets in every scene. The film’s first hour often pulsates, lit by the sheer amusement Ryan and Fry seem to be getting from playing vampires with suggested LGBTQ+ entanglements. Of course, it could be more blatant. The context is mostly there to insinuate not to proclaim. Relationships, including theirs, lack any sense of depth. It doesn’t matter. That’s not the point of Randall’s thriller, which mostly earns that genre tag by certainly not being horror, comedy, or drama. Viewers won’t be looking for any high art when turning on Night Teeth before, during, or after their Halloween parties. They’ll be looking for good-looking people being rich vampires, a filler of a movie that will float out of one’s mind minutes after the credits roll.

It’s not a film that makes you think about the inequities of our world. It won’t provide solutions to problems, allow for emotional musings, or likely provide a splash outside of a few weeks drifting across the screen of your television. But Randall’s film provides enjoyment for about an hour, which will be more than enough to satisfy their spooky craving for most folks. It’s enough fun.